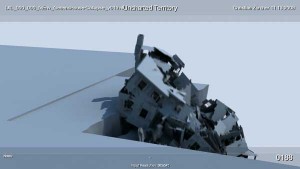 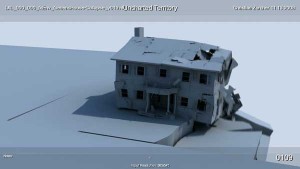 Once the Double Negative team, led by VFX Supervisor Alex Wuttke, had received the original animatics and previz by Weigert and C0-VFX supervisor Volker Engel in Los Angeles, they began to break shots up into effects categories and identified the tools and extensions to tools that would be needed. They also started developing the look of various effects, producing 2D-painted concepts to explore visual ideas. Meanwhile, a group of effects TDs began exploring various technical ideas and different techniques related to the challenges that lay ahead on the production.

Both the Yellowstone and St. Peter’s sequences presented major challenges to the team, but the Yellowstone sequence was certainly the most challenging due to the sheer complexity and volume of effects work required. The team were faced with several tasks through the sequence, including creating a 12-mile-wide Caldera eruption, a 20-mile pyroclastic ash cloud advancing across the terrain, multiple house-sized lava bombs raining down around an escaping RV, and several huge fault lines breaking up the ground.

Using its proprietary software, Stig, Double Negative stitched together hi-res stills to create the pre-eruption backgrounds. The team also created huge matte paintings in several layers to allow the 2D team as much control as possible to add or take away as much depth as needed for each shot.  For the caldera eruption, original footage had been shot at Kamloops, Canada, and the Dneg team generated a 3D representation of a 2D matte painting.

The Double Negative team was required to generate a pyroclastic ash-cloud that chases Cusack’s character through the sequence. This proved a challenge, as the cloud would fill the entire screen and act as a backdrop for most shots – it had to be detailed enough to hold up on the big screen and sell the scale, but would also feature in a large number of shots, so it needed to be lightweight during shot production.

At the direction of Roland Emmerich, Dneg built the lava bombs in sizes ranging from the size of a football to a four-story house. In addition, a Double Negative team led by Philip Johnson constructed a digital extension to a partially built set on location, adding additional buildings, antennae and a large drilling platform at the centre of the facility. This featured heavily in some establishing shots early in the sequence, and then later on in the sequence being pummeled with lava-bomb strikes.

The St Peter’s sequence consisted of 18 shots in two sequences. The first shows the interior of the Sistine Chapel cracking and giving way; the second takes place in St Peter’s Square as the Basilica tilts up, breaks, and rolls down on the praying crowd, who then try to escape from being crushed under it.

Throughout the work on 2012, the team relied heavily on the proprietary tools that Double Negative has been developing over the years. Dneg’s Dynamite was used extensively for rigid body simulation, and for the company’s work on 2012, Dynamite was extended to include such features as glue strengths between dynamic objects and the incorporation of aggregates. These two features allowed the team to develop hierarchies of simulations. This worked hand-in-hand with a set of volumetric shatter tools developed as plug-ins for Maya. For fluid simulation, much use was made of in-house fluid simulator Squirt. Dneg also relied on their in-house volume renderer, and over the course of the project, several optimizations were made to DNB so that it could render the huge datasets required of it. Finally, Double Negative’s R&D team, led by Pete Kyme and David Minor created dnShatter, which was based on an earlier more simple plugin, dnCrack. DnCrack works like cracking a window pane, providing a flat piece of geometry, while dnShatter does that in 3 dimensions, so the artist gets a block that is cut up into solid geometric chunks.

“Maya is at the core of our pipeline and was an essential hub for our workflow,” said CG Supervisor Gavin Graham. “From the start of the process in our layouts, animations and asset creation, through to completion, its scripting capabilities allowed us to manage scenes of enormous complexity. We found Maya particularly beneficial for our dynamics and lighting pipelines. It helped us generate elaborate yet believable effects in an artist-friendly way.”

Sony Pictures Imageworks (SPI) completed 154 shots, including a colossal, CG environment of a massive shipyard constructed inside the Himalayas. SPI seamlessly integrated these digital set extensions with live-action plate photography. John Haley, SPI CG supervisor, said that Maya allowed his team of modellers to build nine one-kilometre-long ships complete with thousands of passengers, hundreds of ship workers and dozens of vehicles. “In addition, our modelling team created several square kilometres of rugged terrain high in the mountains and relied on the layout and animation capabilities in Maya to bring these enormous fully CG scenes to life,” Haley added.

Scanline VFX created over 100 complex water simulation shots, including an aircraft carrier on a tidal wave crashing into the White House. The company’s toolbox included 3ds Max, the VRay plug-in and its proprietary simulation system, Flowline. “Over 95% of our shots were fully CG, and creating them required 1,200 terabytes of disk space. The advantage of 3ds Max is that it can handle enormous data sets and you can just do a lot of the work right out of the box,” said Stephan Trojansky, Scanline VFX senior visual effects supervisor. 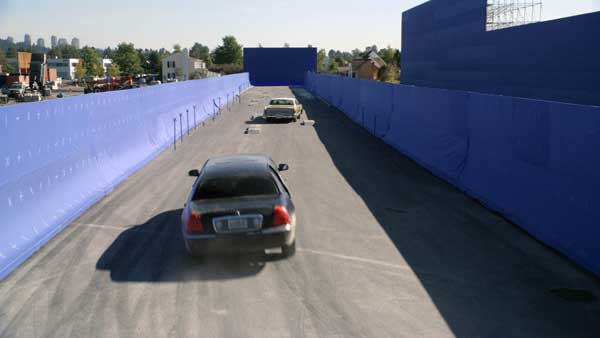