Glasgow-based Playdead has created innovative motion graphics and titles for the BBC1 series “Kevin Bridges: What’s The Story?”, which follows the comedian as he discusses the inspirations for his standup routine. Follows being the operative word here – the graphics float around after the Glaswegian comic like a swarm of bees. 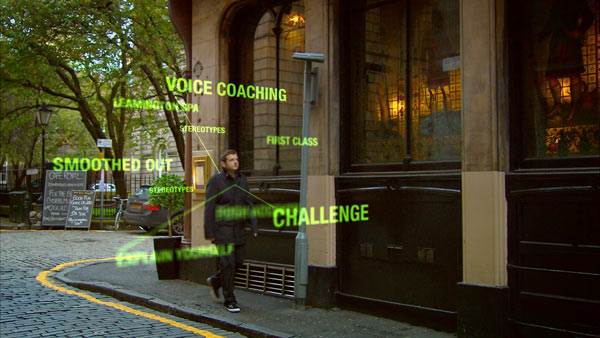 According to Playdead co-founder Jonny Harris, the initial brief from client Open Mike Productions was to create titles and graphics that reflected the stories behind the jokes that Bridges relates in the standup segments of the 6 x 1/2 hour show.

“Kevin was to be very prominent, the main focal point,” recalls Harris. “As well as the opening titles, which would introduce each of the programmes, the linking graphics within the programmes had to somehow “map” out the content and provide transitions in between sections, without being too obvious, and steering clear of a more traditional “map” design.”

One of the main inspirations for how the graphics style would evolve was the opening sequence for “Stranger Than Fiction” [ by MK12, view here]. “We’ve always loved the way that the graphics are integrated with the live action, don’t feel too obtrusive and interact with the character,” reveals Kevin McCrae, PlayDead’s other founding creative. “We felt that we could take this treatment as a starting point and evolve it into its own concept, relevant to the programme.”

McCrae continues: “As lots of Kevin’s material is observations and comments on the world around him, we developed the concept of Kevin walking around a city, collecting thoughts and ideas as he does so. Eventually, we decided that the simplest and clearest way to do this would be to use floating text, representing the content of his stand up material. This had to feel as if it was part of Kevin, so we also used thin white graphical lines to attach the text to his body. We thought that the graphics could link in neatly with his voiceover, animating in certain keywords as he says them, helping to integrate them into the programme footage.” 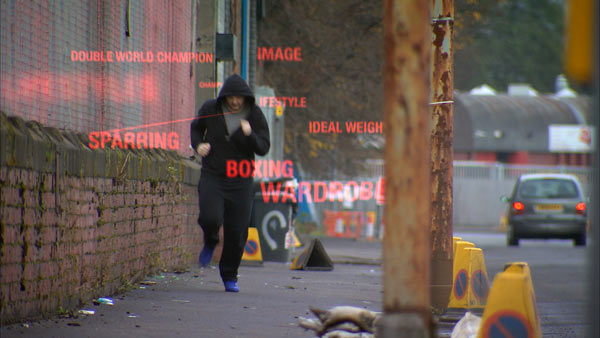 PlayDead viewed an early rough cut of the series, giving Harris and McCrae an indication of style and tone for the programme. “From this, we saw that it was really beautifully shot and quite filmic, using tilt shift and fish eye lenses in places, so we designed the graphics style to complement this,” explains Harris. “We were able to test and develop the concept and idea using some footage that had already been shot. Then, once this was locked down, some more specific footage was shot with the graphics treatment in mind.”

Adobe After Effects was used to create and animate all the graphics. “Due to the tight production time-scales, the graphics had to be easily adjusted if necessary and rendered out fairly quickly, so we chose not to use any 3D elements,” says McCrae. “We also felt that any “chunky” 3D elements could look out of place and wanted to keep the graphics elegant and light.” 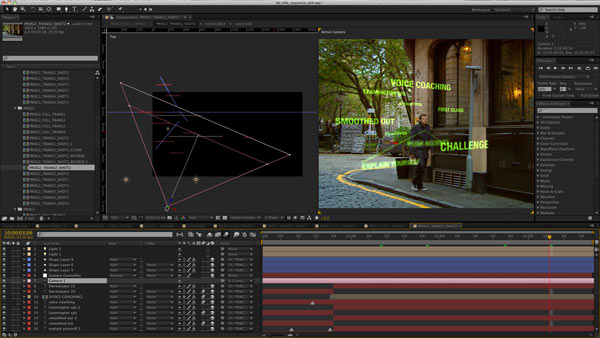 McCrae and Harris were both heavily involved in compositing the graphics, splitting up the workload between them. One of the main challenges was to keep the project files as neat as possible and in order, whilst passing them to and fro.

“For each programme, there was a bespoke title sequence, around 5 transitions and also the animating text to introduce guests, so this meant lots and lots of different compositions,” says McCrae. “As we progressed into the production and learnt ourselves, we streamlined the production process, so that certain tasks would be done by each person, and then brought together into a final After Effects project file.” 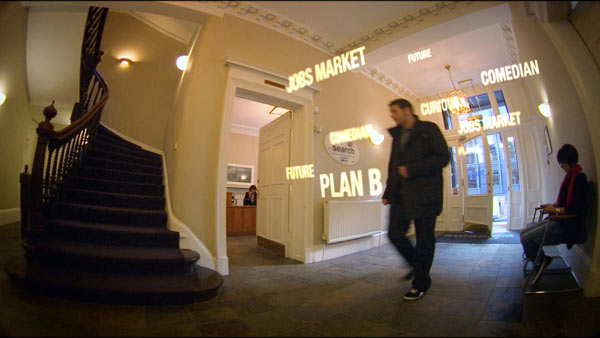 Although the end graphics look clean and simple, there was a lot of manual work behind the scenes to make sure they worked and felt like they belonged in the environment. One of the main tasks was to track Kevin Bridges in all the shots, so that the text and splines would move with his body.