Phillips House Mouse aka “Squeaky clean” is a 30 second commercial made by Flynn Productions for DDB with VFX and grading by Rushes. Here Rushes Lead 3D Artist and VFX Supervisor takes us through the creation of the hero rodent.

Orlando Cubitt’s first solo commercial and foray into 3D comes in the guise of a charming spot for Philips most powerful vacuum cleaner. The animation of the house mouse was courtesy of Andy Hargreaves at Rushes, with Mark Pascoe at Rushes rendering hair and look for the mouse. The end result brings to life an already successful print campaign through DDB London.

Andy Hargreaves explained that the brief from the client was very clear.  “They already had an existing print campaign featuring the mouse stuck to the underside of the floorboards, so we were asked to bring this to life by animating the journey of the mouse over the course of a 30 second commercial.”

“We had the print still from the agency, plus a description from the Director, Orlando, with regard to the action which needed to occur and the character and feel of the mouse,” continued Hargreaves.  “But in terms of a story board, timings and some of the subtleties of the action of the mouse we were able to go with what we felt worked most effectively.” 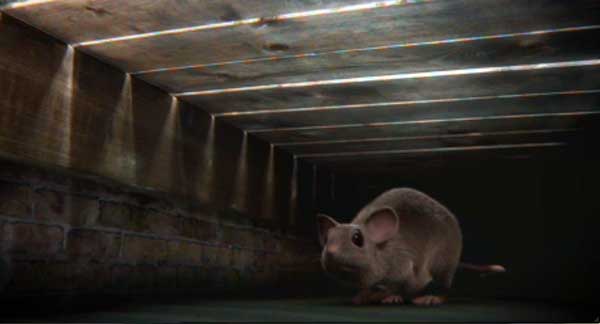 “Due to fairly tight time and budget constraints we knew early on that we wouldn’t be able to model, texture and rig a whole mouse from scratch, in house.  Instead we bought a basic rigged mesh of a rat, which came with its own colour texture map to use as the basis for our animation.   This gave us something usable right from the start of the process, which allowed us to produce a pretty polished animatic within the first few days.   I blocked out a few sequences using the written brief from Orlando  and this then allowed him to see the shot compositions and timings we were thinking of.   In the end I created 3 shots, each over length, which I was able to edit into a sequence and then tweak quite quickly and easily to Orlando’s specifications.   Using the basic rat rig I was also able to block out some quite detailed animation at this stage to give Orlando a real sense of the action and narrative of the commercial very early on.  In this way we hammered out a lot of potential issues at a nice easy stage, and established the feel of the mouse without getting too bogged down in details.” 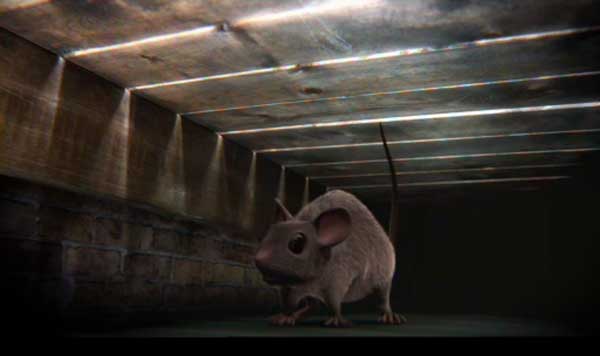 “With the animatic done I then moved onto refining the rat geometry and rigging while Mark Pascoe began to look at creating the mouse fur, and other shaders.   The major job for me was in making the rat feel more ‘mousey’ and cute since it was quite clear that although similar, rats and mice have some major physiological differences.   I did quite a lot of re-modelling of the head area, making the eyes and ears bigger as well as shortening the nose, making it more pointy.   I plumped up the body, smoothed out some of the more muscular definition, modelled more detail into the feet and made the tail thinner and shorter.”

“The most complex task however was in modelling in some eyelids and an interior to the mouth as these didn’t exist at all in the original model.   Not only did I have to model these but they also had to be integrated into the rig so that I was able to animate blinks, mouth movements and subtle facial movements.   Although quite a lot of work and not without its difficulties, this process was still quicker than if we’d have built the mouse from scratch.   It does go to show however that there is rarely anything ‘off the shelf’ which is perfect for the specific task at hand.” 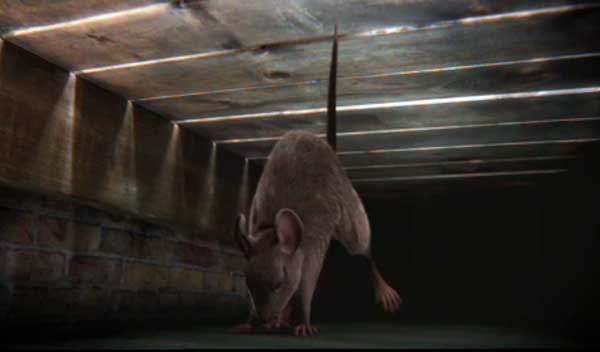 “Animating the mouse was a really fun task as the appeal of the commercial lies in its humour.  Because the mouse needed to be naturalistic and believable Orlando didn’t want big ‘cartoony’ reactions and movements.  I had to try and convey the emotion of the mouse throughout the ad within the limitations of normal mouse behaviour.   From an animation point of view it is great to have these restrictions since it makes you really think about how to get the best results without relying on caricature.   The finished spot really conveys a sense of curiosity, followed by ‘mild terror’ and finishing off with the little mouse really enjoying his ride. At least I hope it does!” 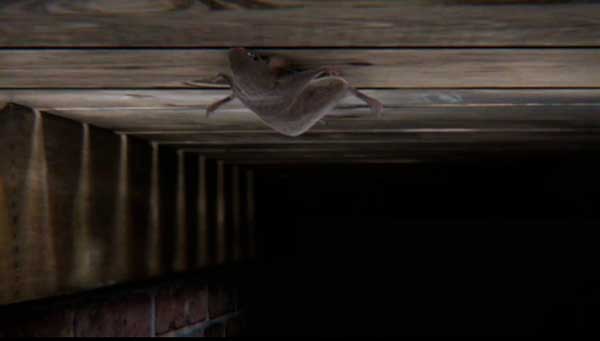 “The biggest technical challenge for us, but one of the aspects which we really leapt at, was creating the fur.  Fur still remains quite a difficult thing to achieve in 3D and it has to be said we had quite a few furry monstrosities during the development process.   Using ‘Shave and a Haircut’ however, Mark was able to create a really convincing fur system, which he was able to control in minute detail.  A lot of time was spent in making sure it flowed the right way across the geometry, and he was also able (as the name suggests) to give the mouse a virtual shave and a haircut.   This meant it had nice fleshy bits on the nose, tail and feet with different length hairs and little tufts across the rest of his body.   He used the mouse colour map to colourise the fur but also added shine and translucency to give it even more depth and realism.   Combined with his atmospheric lighting and the quality of the Renderman renders the end result looks fantastic.” 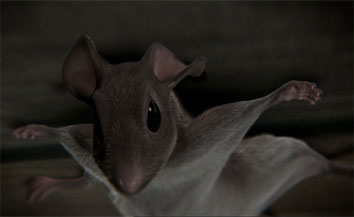