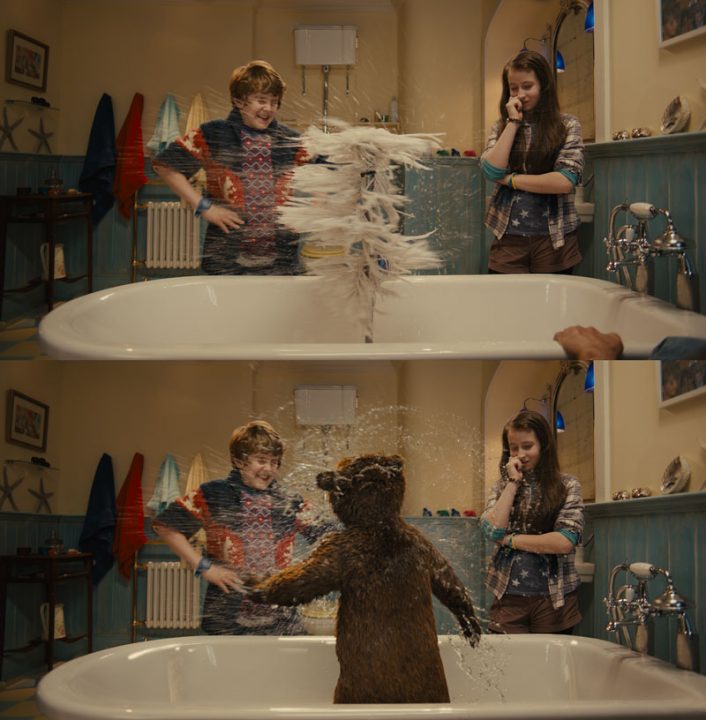 The FX team would begin the process with a water simulation on top of a hairless Paddington model, which created a wet map, showing in black and white where Paddington comes into contact with water. This was the passed to the Creature Effects (CFX) team who used it to drive the fur, making sure that in wet areas it was made to fall and clump a lot more. As soon as the dynamic for the fur was done it was passed back to FX for them to place droplets into the fur and the water dripping from it. The look would then be perfected in Lighting and Comp, who would add extra droplets at key moments in 2D.

There was a lot of fine-tuning to be done, as CFX Supervisor Juan-Luis Sanchez explained: “The first issue was what does Paddington look like wet?  We did it as it would technically happen at first, but then you lost some of what was Paddington, especially around his eyes, so we had to go back and recover his character. We blended between two or three different versions of his fur, which ranged from dry to soaked, depending on where he was getting wet. The important thing was to hit that balance between realism, the character and the comedy.”

Of course all this water results in the classic animal in a bathtub moment as Paddington shakes himself dry in two ultra-detailed slow-motion shots. “We really had fun with it and played up the comedy of his jowls shaking and the water flying off,” Sanchez explained. “We added something extra with an fLab simulation (Framestore’s in-house fat solver) to give the ears that extra level of flap you see.”

Key to selling the shot was getting a genuine reaction from the kids. “It wasn’t a high tech solution,” said Composting Supervisor Anthony Smith. “We got a broom handle about the height of Paddington with mop-heads fixed to it all the way up. We put it in the bath, soaked it and spun it around, so we had real water hitting real kids and a real reaction. In the comp latter it meant we had to remove this spinning mop-head contraption we had built, but it was the best way to do it.”