A shot of Paddington licking Judy Brown’s face was accomplished in a similar way, with Grillo creeping on set to delicately wipe a paintbrush the size and shape of Paddington’s tongue across her face, leaving the perfect, slobber-like mark. The approach meant Framestore had deal with the consequences of having to remove the paintbrush, but it avoided intensive facial tracks and simulations of the liquid running down her face. 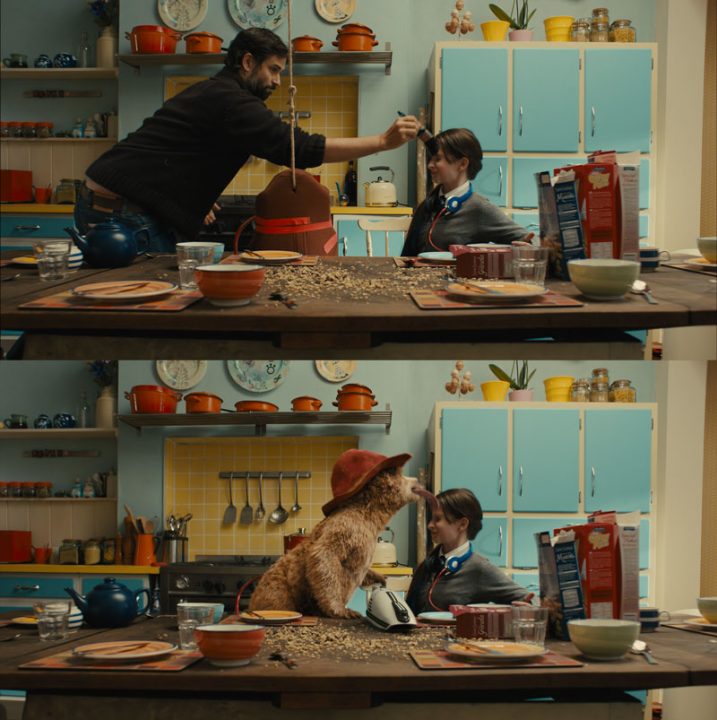 After Paddington shakes much of the water off, the Brown children use hairdryers to finish the job, which required careful placement of Paddington to make sure they were aiming in the right place and some tweaks to the groom the make his fur longer so it would show the effect of the hot air more obviously. The end result is pure comedy, as Paddington is turned into a three foot fur-ball. “It was just one of those crazy shots where we had to push it a bit further,” said CG Supervisor Ben Loch. “We didn’t even go through our normal pipeline for that and simulated every single hair, so that was an extremely heavy sim.”

Marmalade, which we see oozing over fur, provided another new challenge. “It was the first time we had done something that viscous with our fLush solver, so it was quite challenging from an FX point of view,” explained CG Supervisor Alexis Wajsbrot. “We had done zero gravity water, but it’s not the same. It’s a long shot and the camera is locked-off, so you have time to see every detail. You really see the fur get wet and become shinier gradually as the marmalade leaks down. It was one of our biggest renders but the final shot looks really, really cool.”