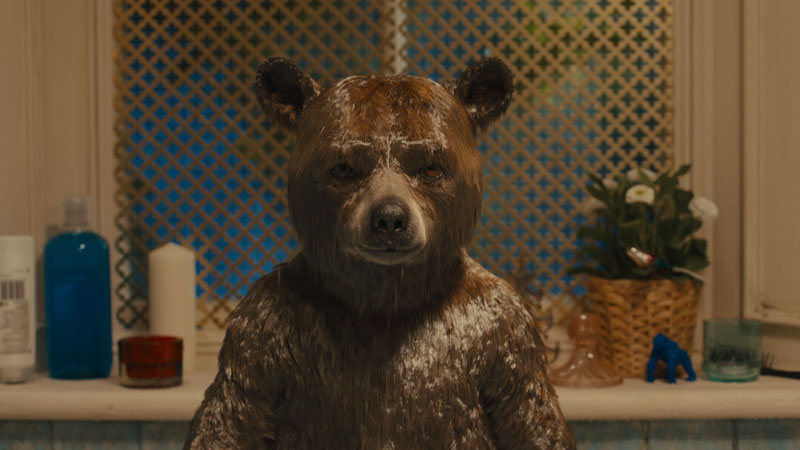 While filming was taking place, the VFX team back at Framestore were hard at work perfecting the look of Paddington. “There was a lot of responsibility finding a photo-realistic design for a bear that people have so clear in their minds,” Grillo said. “We were keen to bring him into the real world so he would sit into the live action and, we hope, people will connect with him. Being anatomically correct meant we needed more detail compared with the simplicity of the original designs, which often had just two dots for eyes. We had to think about things like his wet nose, teeth and muzzle but still make sure that what we created carried that simple essence of the original Paddington.”

King briefed the animation team on who Paddington was before they started work, focussing on every nuance of his personality. In the stop-motion TV series he would often remain quite still, before doing something that took you by surprise, and there’s still a little bit of the old style in this new bear.

“We tried to maintain that spirit in the way we crafted the performance. We didn’t put in too much and instead let things sit and rest. It’s very much in the style of the filmmaking – there’s no excess, it’s all very classic storytelling,” explained Grillo.

“The hope was that rather than filling every moment with movement and unnecessary detail, you could just run a little wind through the fur to keep him alive and really hold some quiet moments,” Pablo continued. “In contrast we have his reactions to some of the more silly situations – to water, to marmalade, and the various conditions he’s put in. A lot of the humour of Paddington is watching him being put through the ringer.”

Paddington’s appetite for accidental destruction results in long moments of physical comedy, which were choreographed with performer Javier Marzan. “He causes mayhem because he touches everything, and everything he touches, we had to build in 3D,” Kind explained. “He gets wet an awful lot – in the rain, in the shower, in the toilet. Those sequences were the most complex tasks in terms of visual effects and there were a number of them.”

Fur and water are difficult things to create individually in CG, so combining them multiplied the challenge. With the elements simulated using different propriety solvers (fLush for water and fDynamo for fur) that had never needed to speak to each other before, a whole new workflow had to be developed at Framestore to allow interaction between the two.