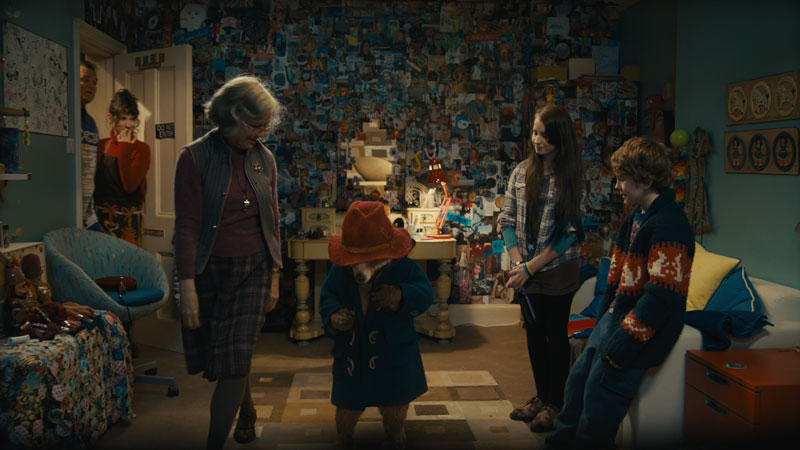 The introduction of Paddington’s famous blue duffle coat was another big VFX challenge, requiring an invisible transition from live action to CG coat as it is swept around Paddington’s shoulders by Mrs Bird (Julie Walters).

“We knew this would be a big shot, so watching Julie on set was bit nail-biting knowing that just a few seconds of her movement would determine the difficulty level of what had to be done,” explained Anthony Smith. “We could have had a stand-in to receive the coat, but we decided to use an eye-line stick to prevent obscuring Julie, to prevent lots of reconstruction in post. The eye-line stick gave Julie a good reference for Paddington’s position and height and fortunately she did a great job of wrapping the coat over the imaginary shoulders.”

The process of transitioning the live action coat into a CG version that wraps around Paddington was a real collaboration between departments. “The moment Paddington starts to interact with the coat it had to move in a way other than just dangling as it did on set,” added Smith. “So we tracked some key parts of the coat – the section Julie was holding and the fabric between her hands, along with the front sections of the jacket. We determined we could keep these live action for as long as possible and use them to help reveal the CG coat exterior as they closed around Paddington, all of the other parts we would simulate with nCloth.”

“As Paddington puts his arms through the sleeves all parts of the coat that would be influenced by that interaction are simulated. We began the composite with a first pass at this and fed back to CFX on where the transitions, which happen in stages on different parts of the coat, were working, where they could be improved, and where we could assist in comp, by reanimating Julie’s arms into better positions for example. We had to have a very productive feedback loop going between comp, CFX and lighting to get the best results.”

“It’s moments like that that I’m most proud of,” says Andy Kind, “where hopefully no one will really notice what we did but maybe wonder afterwards how it was done.”