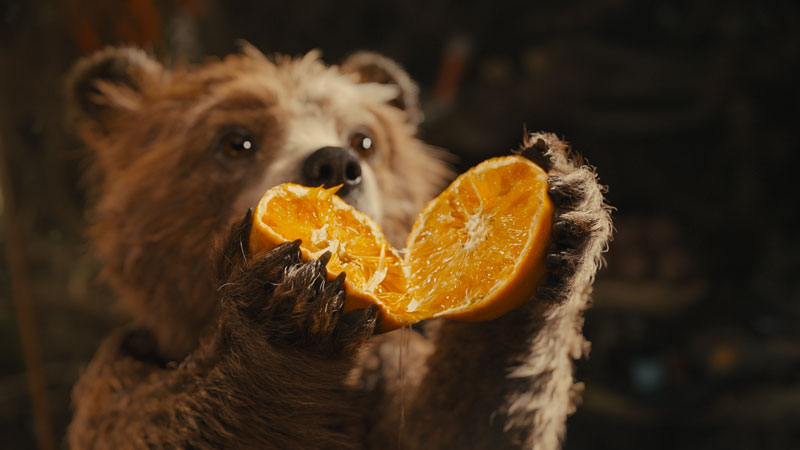 Paddington effortlessly rips an orange in two while making marmalade in another super close-up. Needing plenty of interaction between his paws and the skin it was decided that the outside should be CG, but the interior is based on live action footage Framestore shot as the team attempted to rip oranges in two in the capture lab. A combination of that footage and still frames were put together delicately in Nuke, then finished off with FX juice and spray.

One of Paddington’s most complex scrapes sees him get on the wrong side of a reel of Sellotape. “The tape was complicated because it’s not a manoeuvre you could easily map out, it had to be constructed carefully through a process of animation,” explained Grillo. “On top of that we were dealing with a very complex effects scenario in having to simulate the Sellotape reeling out and wrapping around him. It was certainly a very difficult sequence to accomplish.”

Creating the look of Sellotape was relatively easy, but its interaction with Paddington’s fur, coat and hat made it difficult. The tape had to have folds, snag on the fur, pull on the coat and wrap around his face, restricting his movement while still allowing for the animation Framestore wanted. “It’s an 848 frame physical gag that was both technically challenging and needed to convey the little bear’s struggle with his new environment ,” said Kind. “And the last shot in the film to be completed!”