Visual effects house Cinesite completed over 430 shots on Paramount’s World War Z, including turning Glasgow into Philadelphia, as well as stereo conversion of the VFX. Framestore’s Art Department developed the concepts for the film’s zombies and their unique style of movement, while The Third Floor provided digital previsualisation for the film. MPC also contributed VFX to bring the zombie swarms to horrific life.

World War Z is based on the book World War Z: An Oral History of the Zombie War by Max Brooks. Directed by Marc Forster and starring Brad Pitt as protagonist Gerry Lane, the story follows a UN worker as he searches the globe for information that can stop the zombie outbreak which is bringing down nations.

Cinesite’s main body of work forms the exciting first half of the film, set in Philadelphia, New Jersey, Korea and on a military vessel. In Philadelphia, stuck in a traffic jam with his wife and children, Gerry struggles to get his family to safety as the zombie epidemic attacks the city.

Extensive reference photography was used to turn the sequence, which was filmed in Glasgow, into convincing Philadelphia environments.

Cinesite VFX Supervisor Matt Johnson was on set during principal photography. “I have always particularly enjoyed the challenge of creating invisible effects,” he said. “Photographic elements were used to create the digital environments and there is cutting edge CGI throughout World War Z. Clearly, there are hundreds of complicated effects, but I believe we’ve created a natural-looking, documentary like reality, which was always our aim.”

A later action sequence, set at dusk on the roof of a building, was filmed on a set and the stunning, panoramic environment added digitally. Environment Supervisor Thomas Dyg explained the process: “The director let us know from an early stage that he would like to see a quick first layout of the sequence for himself and the editor to use during the earliest editing stage. They had also planned an early first screening in which the whole sequence would be needed – not in a finished state, but certainly at a state in which the audience could identify the environment and get a feel for the drama.”

Compositing at an early stage with the plate in Nuke gave Cinesite a flexible post-viz workflow for the full sequence.

“Once we had the layout and rough look approved, we continued with smaller details, refining background matte paintings and interaction between the mid ground buildings and the low sun,” adds Dyg. “The continuous refinement was done in Photoshop and Nuke, with any extra modeling done in Maya by the environment artist. Then a number of layers in an EXR file were turned over to compositors to fully integrate with the plates.” 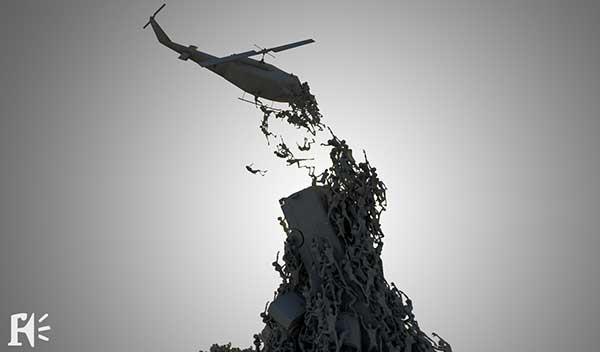 Crowds of computer generated zombies, swarming and attacking people were added, with realistic hair, cloth and attacking movements, which would stand up both at a distance and close to camera. The work involved extensive TD input and led to significant developments in Cinesite’s raytracing, lighting and shading pipelines.

Antony Hunt, Managing Director of Cinesite said his team had a reputation for creating world-class digital environments. “World War Z presented us with a fantastic opportunity to prove this reputation well-founded, while showing our increasing prowess in character animation, an area which we have been developing. We’re also very proud of the positive response to our stereo conversion of the visual effects.”

The concept for the new kind of zombie in World War Z, which moves in a distinctive, destructive wave of bodies that can scale the highest walls and bring down flying helicopters, was created by Framestore’s Art Department, long before being let lose on the world.

During an 18 month visual development period, Framestore worked directly with Marc Forster, Plan B and Paramount Pictures. The department also helped imagine many of the movie’s key scenes, such as the Jerusalem gate takeover, years before production even started.

“From the very early stages of script development, my team and I pitched to Marc Forster and Paramount an idea of how to re-imagine the visual look of zombies,” said Framestore Art Director & Lead Concept Artist Kevin Jenkins. “We knew it would be hard to re-design a zombie, so we didn’t. Instead, we designed the mass of zombies: the way they moved together, the way they flocked and flowed, the way they ran, made towers out of their bodies, and even talked about the way they bit.” 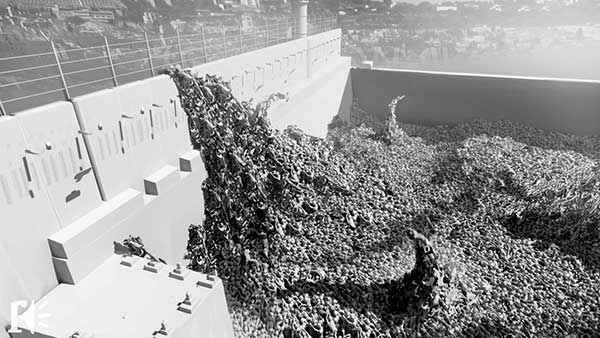 “As we release concept art, you can see the influence we had on the script and the design of the set pieces. We’d like to thank Marc Forster, Andy Jones, and all those who supported us and our ideas on this movie.”