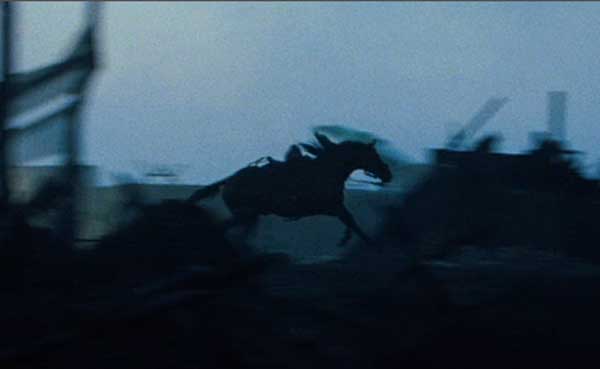 A digital horse was also used for a shot in a sequence that follows the tank jump, where Joey runs alongside a trench before attempting to leap over it, dropping short and crashing into the sandbagged side of the trench and collapsing down into it. The leap and crash were impossible to safely stunt with a real horse. Tank-jump and trench-jump sequences were Lead Animated by Stuart Ellis and Laurent Benhamo respectively, working under Animation Supervisor Kevin Spruce, and both spent much preparation time researching their horses in books, on film and even with a visit to the astonishing stage version.

“Horses are a very pleasurable thing to animate,” said Ellis, “They move beautifully, they always look good. But in cycle animation there’s often a tendency to over-exaggerate the up and down of the character and to not really communicate the weight, they’re just too bouncy. We nailed that, I think, and also what we managed with the head – the pushing forward and out as they gallop – was great.”

The animation team used both Maya and Houdini to get their horses up and running. “The big challenges were the necessity of absolute reality, and the level of detail that this entailed,” added Benhamo. “Nostril flare, vein pulse, skin slide – it all had to be spot on. With such a small number of shots to develop, our Animation, Modelling and Rigging departments – working under the film’s overall CG Supervisor, Mike Mulholland – were able to work very closely together throughout the project, and I think that shows.”

Another point at which the animation team’s work proved useful was in supporting one of the compositing team’s trickier tasks. “Some sequences, with elements such as explosives, legally require mounted horses, so removing the grey-clad riders was one of our jobs,” explained Chris Zeh, Compositing Supervisor. “This obviously entails ‘putting back’ what they block from view, and if the camera angle is frontal this means the moving horses hindquarters. Several times we found we could use the walk-cycled CG horses as a 3D patch. In general, the CG shots were so well done that they didn’t represent the biggest compositing challenge. Beyond superficial cosmetic work, some sequences required a real artistic eye to get them right – the ‘reed sequence’ is one example. The sequence was supposed to show many dozens of British soldiers hiding in this field of reeds, but they had neither sufficient reeds nor soldiers to make it work. Over nearly 30 shots we filled the landscape with reeds – not just 2D but 3D – and soldiers. And we helped fill the air with seeds floating from the reeds.”

One final sequence that de facto couldn’t be shot for real was that of Joey’s nightmarish final collapse, as he staggers through the trenches accumulating ever more barbed wire and other battlefield flotsam until he falls to the ground. Said Morris of the scene: “We shot it all one night, with Finder [the beautifully trained horse that plays Joey in many shots]. We shot the horse writhing on the ground, with a couple of tethers on him – all closely supervised by his trainer, of course – and during this we used a new, in-house developed, witness camera system that gave us extremely accurate body tracks, which were essential for the detailed CG additions we would make. We were then able to procedurally generate dynamic simulations of curling barbed wire around his body. It looks so convincing we were anticipating a call from the Humane Society.” 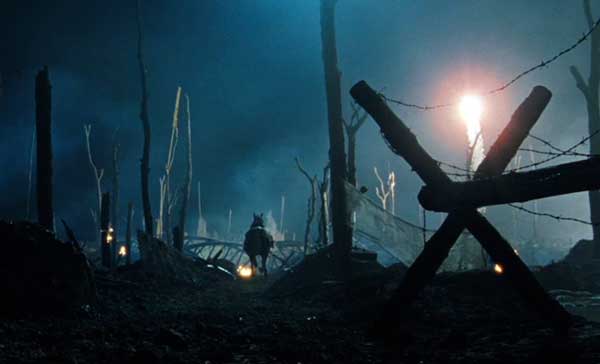 One final recollection from Framestore team members working on the project is worth a mention. “After the initial meeting with Spielberg’s team, I got in touch with Rick Carter via a mutual acquaintance,” explained Art Director Kevin Jenkins. “After seeing some preliminary paintings I’d done for the project, Rick invited me to join his Art Department for the summer leading up to the shoot, which I delightedly did. Rick initially wanted me to concentrate on material that would help give a flavour of the time. I went for a sort of raw, muted, Paul Nash sort of look to those pieces, pretty grim in essence. But I ended up doing all sorts of work with them. Janusz [Kamiński, War Horse’s Cinematographer] had an idea for a shot involving a pair of horses walking in front of flames. I painted this up, Steven saw it and suddenly it became part of the film, which was very gratifying, though the shot didn’t make the final cut.”

Jenkins added: “Rick pushed me to use different media for my work, and showed me new approaches to inspire the looks I was after. The whole three month process was an invaluable education for me, and it’s no exaggeration to say that it has changed the whole way we think about and present our work here at Framestore.” 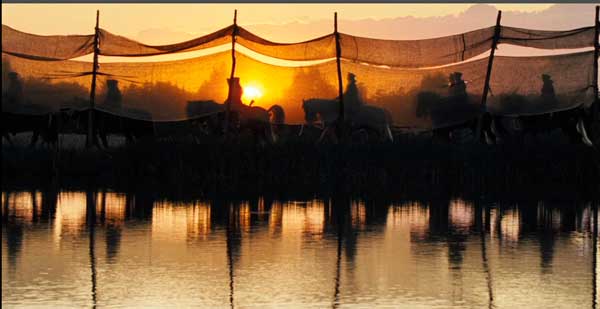