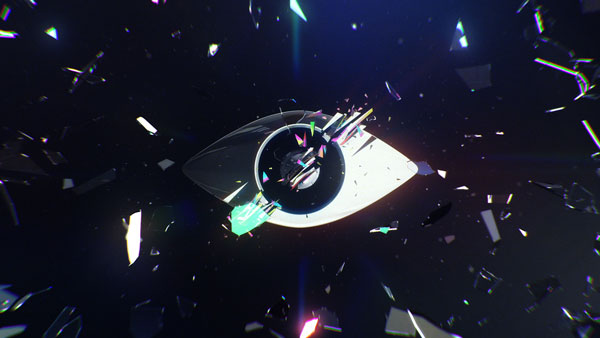 Gramercy Park Studios (GPS) has created a series of VFX-driven promos for Big Brother and Channel 5.

The promos feature show presenter Rylan Clark-Neal smashing a sledgehammer against an enormous mirror, shattering it into the form of the new Big Brother logo. The shards of glass then fly out past the Clark-Neal and fellow presenter Emma Willis towards the screen.

Matt Lowery, head of 3D at GPS, said, “Broadcast work is usually a lot of fun and this job was no different. We received the kind of brief that CG artists really love: ‘It just needs to look beautiful’ was repeated throughout.”

Prior to the shoot GPS head of 2D Mark Beardall created a pre-viz in Flame to match Channel 5’s creative brief.

“Our initial contact with the Channel 5 team revealed ambitious plans, highlighting what a technical challenge it was going to be to achieve the colour-reverse mirror effect for the opening shot,” said Beardall. “With the help of the technical pre-visualisation, we came up with a plan to get exactly what we needed from the green screen shoot.”

GPS editor Vee Pinot was on-set to edit and test the footage, ensuring it would work in post. However, on-set production was complicated by the fact that Willis and Clark-Neal weren’t available at the same time.

To address the issue of designing shards created by the hammer blow, GPS’s 2D and 3D departments worked in close partnership, turning to a combination of Flame and CG assets. 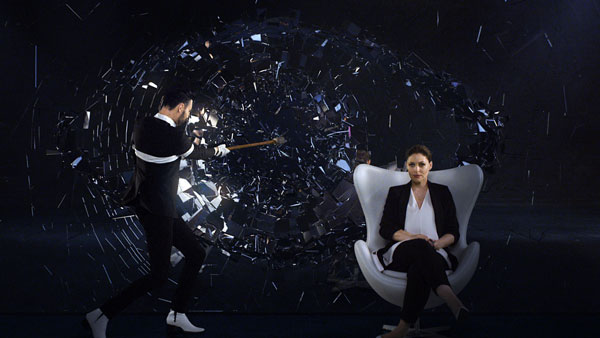 Lowery explained, “When it comes to moving thousands of pieces of CG geometry in any kind of realistic way, simulation is the way to go. We used a combination of RealFow, Maya and Bullet dynamics to achieve the final shattering simulation of over 4,500 separate pieces of geometry. The shattering of the logo was created using the same techniques, taking into account the look of the newly designed Big Brother eye, and blended into our final glass world.”

Beardall added, “The mirror aspect of the build was built in Flame, then it transitions to the CG version as the hammer impacts. The environment frames were exported from Flame to our 3D department so that they could then reflect the environment correctly in the breaking glass.”

“Once we had the glass and mirror shards moving how we wanted them, we added in some hand animated ‘hero’ shards, some finer glass particles, and started the lighting and rendering process,” said Lowery.

Lowery and the GPS 3D team then created the transition glass shards that fly directly towards the viewers’ eyes, further intensifying the 3D feel of the entire spot while also presenting Channel 5’s new branding.

“Each shot is connected through an elaborate transition shard that we had to hand animate,” said Lowery. “The final three transitions introduce elements of Channel 5’s newly designed channel branding. Rob (Fox, Creative Director of Channel 5) and his team were keen to have these shots feel like part of the bigger Channel 5 brand, so extra care was taken in this regard. Finally, we used Redshift, a fantastic GPU renderer, to output the final frames.”

Grading was by Ben Rogers, head of colour at GPS. “Initially I had graded the selected green screen shots and plates, rendering two passes, a beauty pass for skin and style, followed by a good technical pass for Flame,” Rogers explained. “After the compositing had been completed, I did a final pass, or DCP, to balance and enhance the commercial, taking full advantage of what our 2D and 3D departments had provided.”

With almost every element of the campaign created in post by GPS, MD Richard Ireland said, “It was a pleasure to work with Channel 5 and the team on this project. The promo really shows off the talent and facilities we have at Gramercy Park Studios. And being able to provide offline (including on-set editing), VFX, CGI and colour grading all under one roof really showcased the benefits of our end-to-end offering in keeping the creative as the most important thing.”