Framestore was the sole provider of digital visual effects for Steven Spielberg’s War Horse, delivering over 200 shots to the movie. 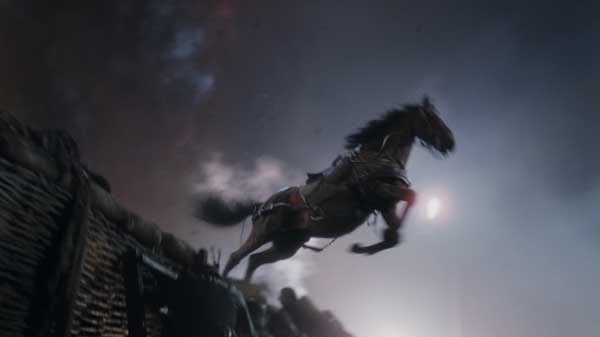 The film tells the story of Joey, a horse born in Devon shortly before the start of the First World War. Belonging to – and beloved by – a young man, Albert Narracott, Joey is sold to the cavalry and shipped to France at the outbreak of war. Joey serves in the British and German armies, which takes him on an extraordinary odyssey, serving on both sides before finding himself alone in No Man’s Land. But Albert has not been able to forget Joey and, still not old enough to enlist in the British Army, he has embarked on his own dangerous mission to find the horse and bring him home to Devon.

Directed by Steven Spielberg, the film stars Jeremy Irvine, Emily Watson, Peter Mullan and David Thewlis. The screenplay is by Richard Curtis and Lee Hall, based on both Michael Morpurgo’s 1982 novel and Nick Stafford’s stage version. The cinematography is by Janusz Kamiński, and the film was produced by Spielberg,  Kathleen Kennedy Frank Marshall and Revel Guest

Spielberg decided to create his film after he and co-producer Kathleen Kennedy had seen the enormously successful stage version of the book. But while the theatrical telling involves the use of extraordinary horse puppets to bring the equine cast to life, Spielberg knew that a cinematic story would need to use a different language. For the big screen, Spielberg decided that only a ‘realistic’ approach would do – one in which as much of the action as possible was captured in camera, as it happened on location. He was aiming for a style such that the film might have been made half a century ago, in sympathy with its historical distance, so there is no modern ‘tricksiness’ on view. That said, Spielberg knew that the story would require a few feats that would be impossible to capture safely with a live animal, and for which only the very best digital equine doubling would suffice. Enter Framestore. 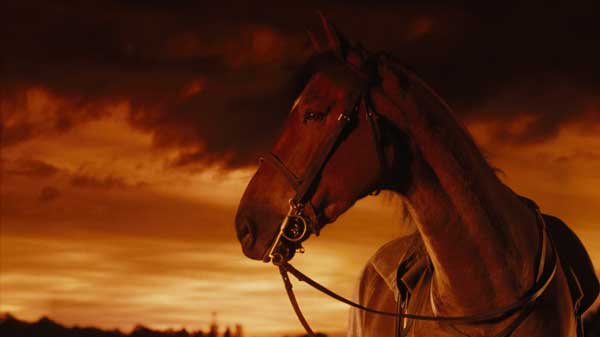 More than half of Framestore’s 200 or so shots involved clean-up or similar work  – vapour-trail removal, telephone wire removal and so on. More elaborate labour and skills were required to remove riders from horses or augment a huge field of reeds in which British soldiers conceal themselves prior to an attack. Just as challenging was the harrowing sequence towards the end of the film in which Joey, struggling through the trenches, is finally brought down to the ground as he drags a mess of barbed wire and a broken gate behind him: the horse was real, but the wires could not be. Finally, for just a couple of shots, digital horses were going to be needed –good enough to trick the eye of Steven Spielberg.

Ben Morris, Framestore’s VFX Supervisor on the project, had an initial meeting with Kathleen Kennedy and Production Designer Rick Carter. “It went really well, I think,” he recalled. “They quickly recognized that we could deliver everything they needed, from the mundane to state of the art CG animation. I should emphasise that the film Steven wanted to make had no place for self-conscious VFX shots – it was to be as real as possible, with any digital elements integrated invisibly in the service of that sensibility.”

US-based studio The Third Floor did the pre-viz for the film, working closely and collaboratively with the Framestore team. With Spielberg’s team having minutely prepared the ground, the director arrived in the UK for the 53-day shoot in August 2010 and, as Morris recalled, wasted not a second. “As a VFX person, you often find yourself waiting around on set a certain amount, but Steven and his team were undoubtedly the most professional filmmakers I’ve ever worked with – we sped from one set up to the next with everyone knowing what they were doing and Steven knowing exactly what he wanted from each shot. And he was doing cutting work as he went.”

The genuinely collaborative nature of Spielberg’s work ethic was further demonstrated later on during the shoot when Morris was given the opportunity to shoot a sequence with an additional camera team: “We went to do a few pick-up shots and showed them, a little sheepishly, to Steven on our iPads. He just said ‘Great – can you go and shoot the rest of the scene?” So – with a mixture of trepidation and glee – we did so.”

This was a sequence in which Joey is cornered by a tank and which culminates in his vaulting onto and over it to escape. It took a couple of weeks to shoot, and was one of the very few points at which a CG horse would turn out to be necessary. 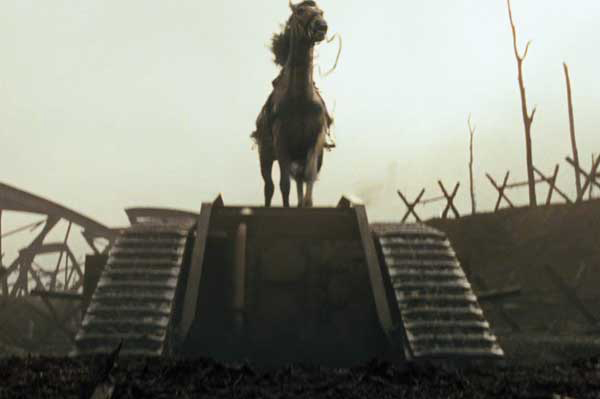 Continued Morris: “When we brought the footage back to him, he suggested we might also provide input by preparing a rough cut of the shots, which we did. Christian Kaestner and I also collaborated on creating another shot for Steven, one involving a cavalry brigade – some 300 horses strong – newly arrived in France. We found a suitable location on the Duke of Wellington’s estate in Hampshire, and used a Canon 5D to shoot test replication passes which we comped together and presented to Steven. For the final shot we managed to get a great sunset view of the horses. Throughout, we all felt privileged to be involved and trusted at this level.”

The trust continued during the five-month post production period, with Spielberg’s on-set ability to make lightning fast decisions a vital element of the process. “When we started delivering shots we were all a little nervous, I think,” said Morris, “But we soon realised we’d get immediate (and generally positive) feedback from Steven, and we grew in confidence.”

Spielberg remained adamantly opposed to the use of digital horses until the aforementioned tank-jump sequence. The shot as captured in camera simply wasn’t working, a fact remarked on a couple of times by Spielberg during reviews. Morris put his team on it, and shortly after presented Spielberg with a new steed. Impressed, the director asked where the footage had come from and Morris finally revealed its digital lineage. With a shot that finally worked, the purist gave way to the pragmatist and Spielberg okayed it, to the team’s relief and pride.