With the release today of Harry Potter and the Deathly Hallows: Part 1, one of the most ambitious film cycles in cinema’s history starts to draw to a close. The film sees Framestore providing some of its finest work yet, including recreated house-elves, a magical animated storybook sequence and other dazzling VFX- 110 shots in all. 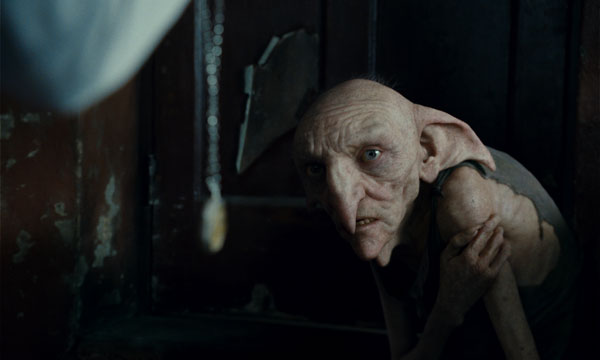 Nine years after the appearance of the first Harry Potter film, J.K. Rowling’s saga is concluded with the final book of the septet forming two feature films, the second to be released on 15th July 2011.

Both films are directed by David Yates and produced by David Heyman, David Barron and J.K. Rowling. As before, the films star Daniel Radcliffe, Rupert Grint and Emma Watson, supported by a veritable Who’s Who of British acting talent.   Harry Potter and the Deathly Hallows sees Voldemort’s power growing ever stronger. The young wizard finds himself in more danger than ever before, danger that threatens the lives of everyone Harry loves…

Framestore has been with the Harry Potter films from the first and throughout, having contributed many memorable creatures and sequences to the series.  Framestore’s most significant contribution to Deathly Hallows: Part 1, is in its (re) creation of Dobby the house-elf (voiced by Toby Jones), one of Harry Potter’s oldest friends and a key figure in the events of this film, as well as of Kreacher (voiced by Simon McBurney), another house-elf of more ambiguous loyalties.

Christian Manz was the VFX Supervisor leading the Framestore team through over 16 months of toil and creation. Manz, whose many credits for Framestore include work on The Chronicles of Narnia: Prince Caspian, The Golden Compass and two previous Potter films, says that Deathly Hallows: Part 1 was a unique experience.

“It was that rarest of projects where everything went right,” he recalls. “We had a small team – no more than 60 over all – that worked fantastically well together; we had an excellent relationship with Tim Burke [the film’s VFX Supervisor] based on mutual respect and an enormous amount of trust on his part; and we had the luxury of a schedule that, for once, didn’t constrict or prevent the artists from giving their very best. You can see all of this in the work, without doubt.”

An important pre-production decision – one that played to Framestore’s strengths – was that the two main house-elf characters would be keyframe-animated rather than ‘acted’ through motion capture. This followed a proof-of-concept demo prepared for Yates and Burke by a small team led by Manz, Lead Animator Pablo Grillo and CG Supervisor Andy Kind in February 2009.

“Mo-cap is often directors and supervisors first choice when looking for photo-real humanoid performances,” Grillo said. “But with mo-cap you get ‘everything’, which can result in that slightly queasy, uncanny valley sort of look. Our animators were able to carefully craft emotive and believable human performances from careful observation of a variety of sources.”

Burke persuaded Yates of the importance of having the voice actors on-set and performing on film, and with these performances as reference, together with the animators’ research – including photographic studies of Framestore’s oldest employee, and, vitally, their own imaginations, the Framestore team were able to engineer a staging that worked convincingly within the context of the edit and the quirky physicality of the house elves. 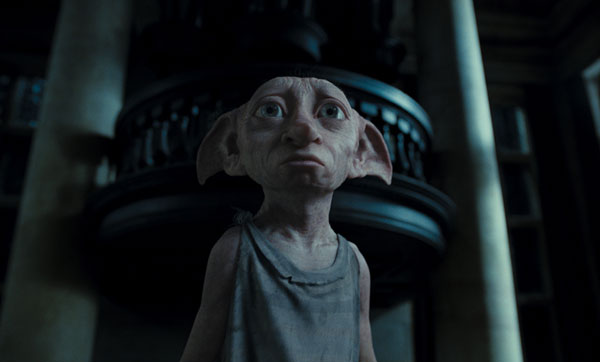 Another important aspect of the elves to be settled before the sequence-work proper began was their physical appearance. Both Kreacher and Dobby had appeared in earlier films, so there was a limited amount of wriggle room on this, but Yates and his team felt that some tweaking was necessary. Dobby is a crucial emotional focus within the film, and it was important that the audience were able to connect with him as intimately as possible. And the beings we respond to most readily in this way are our fellow humans. To this end, both elves underwent what was essentially a humanising process, a ‘softening’ of their more grotesque features. Starting with the original maquette used by ILM to create Dobby for the second film, and with Framestore’s own models of Kreacher used in the fifth film, the team set to work using the elves’ original topologies, but giving them both a makeover. Dobby’s neck was smoothed out, his arms shortened and his eyes were made less saucer-like; Kreacher’s nose was shortened, ears trimmed and so forth. 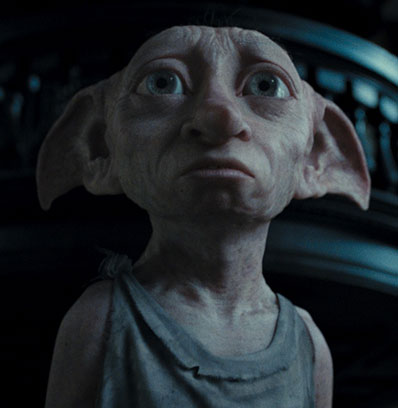 The lighting of the interiors during the early scenes with Kreacher and Dobby is striking and atmospheric. “We aimed for soft shadows and lighting which fell across the skin in an effective way,” says CG Supervisor Andy Kind. “We built on our recent skin shading technology, using multiple subsurface scattering techniques. To light scenes, we used mostly ‘bleed cards’ of HDRI textures from the set projected on cards. That created a less diffuse style of lighting than we have done in the past.”

A terrifying sequence at Malfoy Manor was notable from Framestore’s point of view for its particularly demanding disapparation. To highlight the drama of a group of the heroes transporting away from danger, Yates asked that the shots look as if they’d been filmed on a Phantom camera, i.e. in merciless slow motion. The apparate/disapparate look, which had been developed by MPC for earlier films, was not designed to withstand such minute scrutiny, so Framestore had to redesign the effect almost from scratch. Yates’s reference for the look was a slightly ambiguous “nebula-like”, and it took the team some 100 iterations to finally nail it.

Shot at Freshwater West in Wales, the location shoot featured a Dobby sized body double and a dummy.  Compositing Supervisor Christian Kaestner led the 8-strong compositing team. “The dummy and the body double became lighting reference for Framestore while integrating the animated character into Radcliffe’s arms,” he says. “Tim Burke shot a lot of reference and clean plates, but the takes that David Yates chose were the ones of Harry interacting with the stunt double. That required a lot of paintwork, so we went to Leavesden and shot texture reference of Harry’s wardrobe and Radcliffe’s hands, and we used those textures to rebuild parts of Harry that the double had obscured. We then restored areas of Harry’s jacket, his shirt and hands by re-projecting and animating textures.” 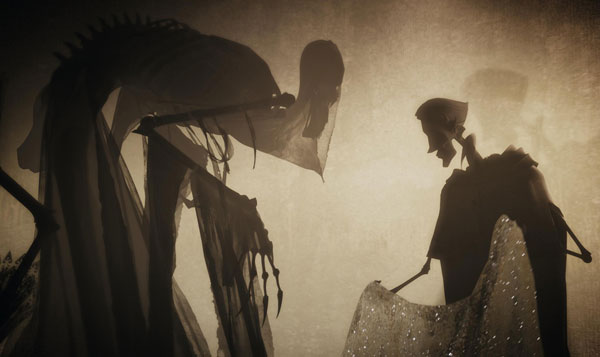 At one point in the film, Hermione is directed to read aloud a story from The Tales of Beedle the Bard, her book of fairytales. The story is a wizard folktale about three enchanted artifacts – ‘Deathly Hallows’ – that grant their owners dominion over Death. To take the audience into this tale within a tale, the production hit upon the idea of an animated interlude depicting the events as Hermione narrates them. The result is a stunning nearly three minute sequence directed by Ben Hibon and created by a 37-strong crew drawn from Framestore’s Commercials team, and led by Sequence Supervisor Dale Newton. “An early stylistic influence that underlies the idea behind the sequence is the work of Lotte Reiniger, a stop-motion silhouette animator active between the 1920s and 1950s; another more direct influence is the traditional shadow puppetry popular in India and the far east,” explains Newton, “Both elements entail a simplicity and directness in their visual style, but Ben wanted to add the sophistication of modern cinema and tell the story in what appeared to be a single flowing shot.”

Working in Maya, Hibon and Newton created the story’s characters, emulating the rigidity and motion of Reiniger’s hand-cut paper silhouettes. “Our goal was to create designs using a uniform visual language that would bind all the various elements in the show – characters, sets and visual effects,” Newton says. “Though all the designs had to work as simple immediately recognisable silhouettes there had to still be a feeling of abundance of detail, and only reveal it where absolutely necessary.” Backgrounds were based on digital photographic textures of backlit paper, layered to create depth and translucency. “Ben loved the way traditional Chinese shadow puppetry was supported by a tactile and translucent surface, a textured screen space almost,” says Newton, “One of our compositors, Adam Rowland, created a three dimensional paper ‘fog’ in Nuke, which allowed us to assimilate this whilst moving cameras freely in space.” To further enhance the gritty sensation of puppetry, Newton’s team animated the characters with a slight awkwardness or jitteriness. The end result is a perfectly achieved micro-narrative within the movie, stylistically separate, yet integral to the larger story that is unfolding. 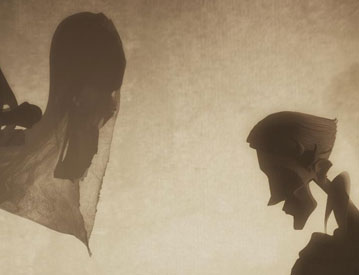 ”The Framestore team breathed new life into Kreacher and Dobby – both funny and moving, joyful and sad,” said Tim Burke. “They created some truly memorable moments in The Deathly Hallows Part 1.  I am thoroughly thrilled with their work.”