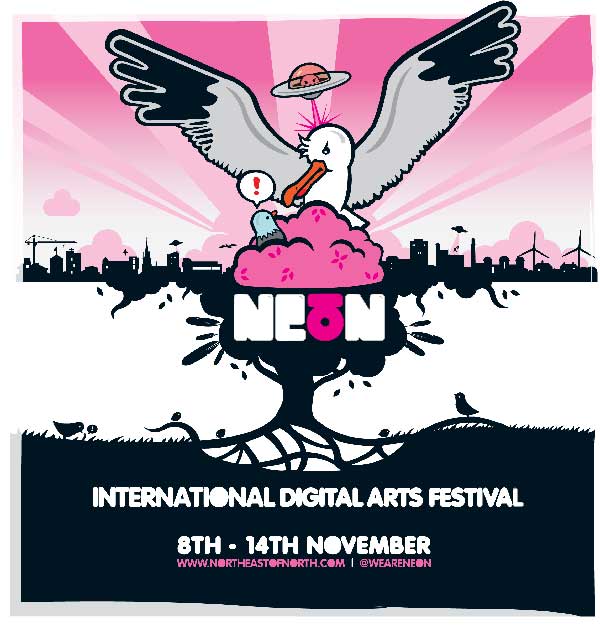 Taking place on Thursday 11 November and Friday 12 November, 2010 in Dundee, Scotland, the NEoN festival conference will this year will feature a host of well known and highly respected individuals within the world of digital art, the digital media and technology driven industries.

The latest confirmed speakers at the conference will include Ian Livingstone of Eidos and Chris Van der Kuyl of brightsolid Ltd., who will be hosting the NEoN conference, while Augmented Reality Specialist, James Alliban, Business Development Manager at Adobe, Neils Stevens and Iain S. Bruce, Managing Director of Revolver PR have all been announced as holding sessions and delivering presentations on their respective fields of expertise to the NEoN conference audience. They join such luminaries of the design world as Akinori Oishi, Pictoplasma, Tern Digital, Pat Kane as well as Microsoft, TagTool and many others.

The NEoN conference will take place in the Centre of Excellence, University of Abertay, Dundee on Thursday 11 November and Friday 12 November, between 9am and 6pm, with tickets still available now at:

The eagerly awaited NEoN sessions are certain to be one of the highlights of the NEoN conference and the wider festival. The presentations will be undoubtedly beneficial and stimulate interesting and engaging discussions among audience members whether professionally or otherwise involved in the technology driven arts and media sectors.

After successfully hosting last year’s NEoN conference, Chris van der Kuyl will return as a welcome host for the NEoN conference. Widely recognised as one of the UK’s leading young entrepreneurs, van der Kuyl will demonstrate his experience, passion and drive for the development of creative interactive technologies, businesses and the arts. Van der Kuyl currently holds the position of Chief Executive Officer at the innovative brightsolid Ltd, whose online publishing division is responsible for companies including the landmark socialnetwork, Friends Reunited and the UKs leading family history brand, Genes Reunited. Van der Kuyl is also Chairman of 4J Studios, a next generation video game development studio which prides itself on creativity and technical excellence. In addition to van der Kuyl’s impressive business resume, he plays an integral role in the development of the creative, technical and cultural industries in Scotland. As one of the youngest Fellows of the Royal Society of Edinburgh, van der Kuyl sits as a member of the Scottish Scientific Advisory committee advising the Scottish government on all areas of science and technology. Furthermore, van der Kuyl also Chairs the Creative board of the Education Wing at Kelvingrove Art Gallery in Glasgow and is a Director of Dundee Science Centre.

Ian Livingstone OBE, Life President of Eidos and recent recipient of the British Inspiration Award for his services to the interactive entertainment sector is set to entertain and inspire enthusiasts and aspiring entrepreneurs alike. As co-founder of Games Workshop in 1975, Ian Livingstone has played an integral role in the development of the computer games retail industry. During his career at Eidos, Livingstone has been a leading player in major franchises such as Tomb Raider and Hitman. In addition to his involvement in the commercial side of the industry, Livingstone is responsible for a number of cutting edge industry innovations: Launching the UK’s first interactive games magazine, White Dwarf, in 1977 where he held the editorship for five years, and co-devising the Fighting Fantasy series of interactive games books in 1982 which resulted in huge international commercial success.

The full line up of speakers and delegates involved with the NEoN conference can be found on the NEoN website. A hard copy of the entire NEoN programme of events is available for collection at various cultural institutions across Scotland, with the main outlet being the Hannah Maclure Centre, Dundee.