On wings of song

MTV Award-winning music video director Robert Hales of production company Mothership has teamed up with teen pop superstar Miley Cyrus on the music video for “Can’t Be Tamed,” the title track off the album of the same name, which releases on Disney’s Hollywood Records in June. 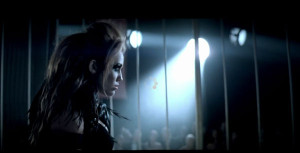 The video is a lavish visual feast featuring a new look and sound for Miley Cyrus, along with wildly elaborate costumes, set designs and choreography. The video also features languid visual effects from Mothership sister company Digital Domain, which created, among other things, massive digital raven wings for the songstress.

The music video is a coming out for the artist as she sheds her former bubble-gum image for a newly mature look. Cyrus collaborated very closely with Hales, who based the video on a creative concept and initial treatment Cyrus developed.   “This was a true collaboration,” said Hales. “Miley knows exactly what she wants, She came up with the bird concept, and said to me, ‘I don’t want a bright poppy video. I want blacks and blues and golds; I want it dark. I built a style and story around that based on references mostly from nature — birds of paradise and creatures — along with bits of couture styling. During the shoot she was brilliant. She gave me something different with every take. Miley is the real deal. She’s in total control of her career and has a true artistic vision that’s impressive for someone of any age.”

“Can’t Be Tamed” opens at a black-tie gala at the Natural History Museum as guests assemble for the unveiling of the museum’s latest rarity, the once-believed-extinct creature Avis Cyrus. From within a towering birdcage Miley Cyrus emerges from a nest and when a light bulb flashes, her slick black plumes unfurl and wrap protectively around her body. Dancers dressed as exotic birds of paradise rise up behind her. They shimmy through the cage’s bars and descend upon the museum, prowling through exhibits and flanked by taxidermied beasts. At one point, the pop siren is transformed into a beautiful peacock creature in a silver corset lying atop a field of brilliant green feathers.

The production was shot live on a sound stage with Digital Domain creating CG set extensions, matte paintings (including a field of digital peacock wings) and the smoky ‘destroyed’ museum environment in the closing shot. Because Mothership and Digital Domain operate as sister companies, Hales and the visual effects team were able to work efficiently over the five-week production schedule — a very fast turnaround considering the production values of the video and the extensive visual effects.

“VFX Supervisor Jay Barton, is incredible,” said Hales. “He got completely into character, miming the action of the wings to the animators. He has a great sense of presentation, timing, grace and drama, which as a VFX supervisor, is a brilliant skill to have. He and his VFX team didn’t just take directions; they made the music video better. I’m insanely fortunate. Being on Mothership’s roster means I have access to the caliber of talent, resources and relationships that Digital Domain has – it’s jobs like this that remind me why I make music videos — aside from the fact that it makes me a hero to my three nieces!”