The Foundry will announce a new range of products at NAB 2010 next week and is collaborating with Weta Digital to bring to market Mari, its 3D texture painting technology.

Development of Mari was driven by the texture department at Weta Digital to handle the massively complex, highly detailed look development work demanded of projects such as Lord of The Rings, King Kong and Avatar. Designed as a full 3D paint tool, Mari is extremely scalable, coping easily with an obsessive level of detail – literally tens of thousands of textures according to the company– quickly and elegantly.

At the show, Zoe Lord, Texture Artist on Avatar at Weta Digital, will demo using Mari in a demanding production environment. 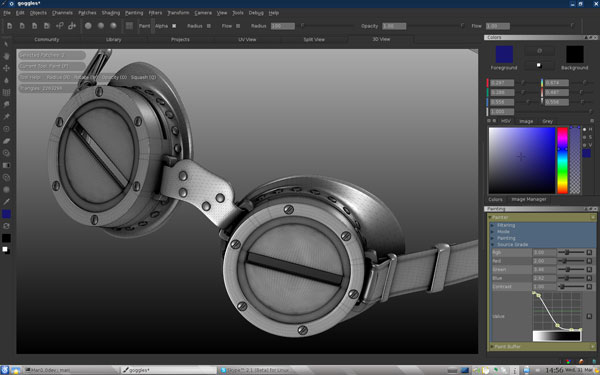 “This is going to be a really interesting NAB for The Foundry,” said Bill Collis, CEO, The Foundry.  “We have lots of great things to show and are looking forward to being amazed by our customers’ work as usual.  We are thrilled to add Mari to our product range and excited to see artist’s reactions.  As ever, NAB is an invaluable opportunity to meet customers face to face that we very much look forward to.”

Nuke 6.1 will also add the Ultimatte keyer, giving artists integrated access to all mainstream industry keyers. The Foundry says there are many improvements to the 3D workflow, which now includes FBX export; 3D selection; snapping and alignment; and interactive camera and light positioning looking through the viewer. Notable improvements have also been made to the workflow and performance of the paint and roto toolset.

NukeX 6.1 includes improved workflow features for the camera tracker such as simplified tools for selecting and eliminating bad tracks, an updated solver for stereo cameras and new constraints for motion paths.
Artists from ILM, Weta Digital, Zoic Studios and Sony Pictures Imageworks will be helping The Foundry show Nuke’s true potential across a variety of production workflows from stereo projects ‘Avatar’ and ‘Alice in Wonderland’ to commercial production and the VES Award winning TV series ‘V’.

NAB is also the first outing for two new 64-bit tools for After Effects:  CameraTracker  and Kronos 5.0.

For Kronos 5.0, The Foundry has created a new accelerated retimer and motion blur plug-in based on the Academy Award-Winning Furnace algorithms.  It’s the first product to be accelerated by The Foundry’s new ‘Blink’ technology, which speeds up render times by harnessing the power in a graphics card.

Also at NAB, The Foundry will unveil FurnaceCore, a new toolset for Avid DS users. Made possible by 10.3’s adoption of OFX and a lot of work from the engineering teams at both Avid and The Foundry, FurnaceCore is a set of 10 problem solving plug-in tools that use motion estimation to remove the pain from jobs like rig removal, retiming and grain management.

See more about Nuke and The Foundry on Fired By Design

See more about Weta Digital on Fired By Design

Find out more about Mari