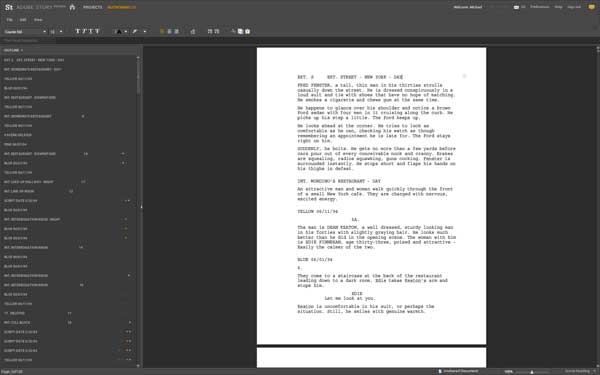 Adobe Story is a collaborative script development tool designed for creative professionals, producers, and writers working on or with scripts and screenplays

Another product was gathering interest off to the side of the Adobe booth, in the form of Adobe Story, an online and offline collaborative script development tool. Available now on Adobe Labs, Story allows information, such as script location and character biographies, to be captured or entered. The metadata will automatically flow into other products in the Creative Suite Production Premium toolkit, improving the efficiency for capturing clips and editing footage. The metadata can also help viewers discover and search through content online to find their favourite characters, episodes or scenes.

Stereoscopic 3D was a huge theme at the show, with products being launched for capture, cleanup and compositing of the dual streams captured by cameras in stereo rigs. Richard LaBerge, Exexcutive Vice-President, CMO for 3D stereo broadcasting developer  Sensio, told me that CGI creatives need to start learning the tools now, as he expects a surge in S3D productions by the third quarter of 2010.

One such stereo capable tool is Mystika from SGO. It had one of busiest of booths at IBC, with Soho animation house Bird Studios and London-based HD and stereoscopic specialist On Sight both purchasing Mystika, the company’s high-end postproduction system at IBC.Describing himself as a big fan of Mistika,Ian Bird, Principal of Bird Studio, said: “it should help us to reach new creative heights with our current stereoscopic 3D projects that are starting immediately.”

The latest version of Mystika incorporates real-time tools for grading, compositing and repairing stereoscopic images, including processes to adjust inter-ocular camera distance and correct geometry and colour errors between the left and right streams.

“Bird Studios will be using it when mixing stereoscopic animation with stereo live action, as Mystika is the ideal tool to tackle all the issues that crop up in that scenario,” said Giles Parker, MD of SGO’s reseller/installer Pixelution. “It’s very fast and has an open architecture that makes it easy to work with existing applications.”

Alioscopy was showing off its proprietary autostereoscopic HD monitor system on the Autodesk stand.  The system negates the need for 3D glasses and comprises of a lenticular HD monitor and the Mix 8 plug-in for rendering multiview content out of Maya and 3ds Max.

Quantel is also benefiting from its early adoption of S3D, with a new French postproduction company purchasing one of the company’s stereo 3D capable Pablo 4K finishing systems. FlyingS3D, formed by industry veteran Audrey Bourdoi will be dedicated to stereoscopic 3D production. Quantel also announced that the latest release of Pablo includes a new Cubebuilder 3D Look-up Tables facility that makes it easy to create and carry a particular ‘look’ right through a project.

Although without a stand this year, Gridiron was also at IBC, pushing the next version of its Visual Workflow Manager, Flow 1.0.1 at Apple’s off-site pavilion. According to European creative director Angie Taylor, there has been a lot of interest from studio legal teams and project managers looking to manage and protect file use in the creative workflow. It’s not the type of user the tool was initially aimed at, but of course Gridiron isn’t exactly complaining at this development.

It seems that the recession hitting other sectors has failed to make much of a dent in the film and high-end broadcast industry. IBC may have felt slightly quieter than previous years, but a positive mood prevailed throughout.