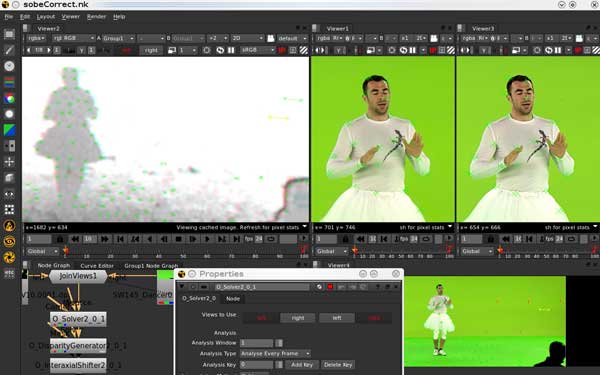 Another big draw at IBC 2009 was The Foundry booth, where the company was previewing Nuke 6.0. This will incorporate a completely new shape rotoscope and paint toolset based on a rewritten core curve library and new RotoPaint node. The Foundry also released details of NukeX 6 which will further add an integrated 3D camera tracker, automated and manual lens distortion tools and FurnaceCore plug-ins. Also showing was a new release of Ocula 2.0, an update to the collection of plug-in tools to address common problems experienced with stereoscopic imagery in post production.  Considerable workflow improvements offer better control for the calibration of stereo sequences, including new algorithms to perform image corrections and disparity map generation. The toolset also gains additional functionality with the ability to generate disparity maps from CG depth maps, and depth maps from live-action stereo footage.

The Foundry also hosted Florian Gellinger of Berlin-based Rise FX showing how the pre-viz animation created for Matthias Glasner’s This Is Love could be directly implemented in the Nuke workflow, while Image Engine showed how Nuke helped in the creation of the vfx for Neill Blomkamp’s District 9. Image Engine demonstrated Nuke’s unique workflow by showing how 3D elements were output as rendered passes onto 2D cards and stacked in the 3D compositing space. Among the tools Image Engine developed for the film was a position pass tool in Nuke, which gave open EXR data for the position of a model in world space. This data was used to generate a point cloud which when combined with a beauty pass created what appeared to be, in Normal Map fashion, a highly textured model that could be lit and used in setting up scenes.

Another of the significant trends at IBC was a noticeable move to provide higher quality video on demand, particularly Web based HD delivery mixed with interactive content. This was a strong theme in Microsoft’s announcements, which included details of the forthcoming release of Silverlight 4 and Live Smooth Streaming, which enables delivery of interactive, high-definition-quality content over HTTP. As well as being able to able to take advantage of Smooth Streaming, Silverlight 4 will include native multicast support and support for offline digital rights management (DRM) powered by Microsoft’s PlayReady technology.

Adobe was also keen to demonstrate content protection credentials with its Flash Access 2.0 technology. Previously known as Adobe Flash Media Rights Management Server, this scalable solution will ship early next year and will provide robust protection of audiovisual content through the Flash Player. Flash Access 2.0 supports distribution of standards-based MPEG 4 (H.264) content as well as the FLV file format through a variety of distribution mechanisms, including progressive download, streaming and download for local playback. Protected content can also be played back in rich Internet applications (RIAs) that run outside the browser using Adobe AIR. Adobe was also promoting CinemaDNG, aimed at defining an industry-wide open file format for digital cinema files and ensure easy file archiving and exchange. Adobe has made CinemaDNG plug-ins for After Effects CS4 and Premiere Pro CS4 available online on Adobe Labs.