IBC, held annually in Amsterdam in September, offered a chance to catch up on the latest technology and trends in the broadcast and film world. 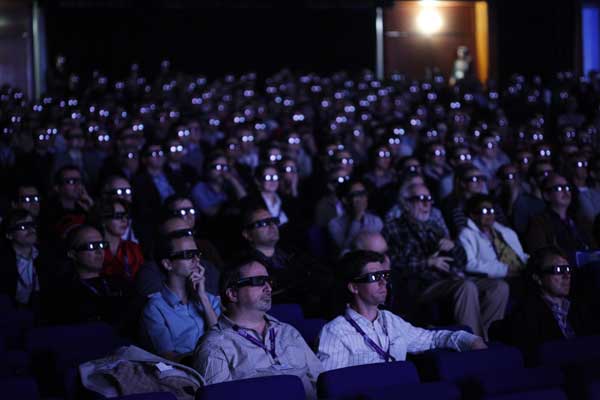 A key trend was the increasing power of the GPU and its effect on the creative pipeline. An example of this was demonstrated on the AMD stand by StudioGPU in the form of MachStudioPro. Bundled with AMD’s new $1,800 ATI FirePro V8750 graphics card, this $5,000 production solution can seamlessly bolt into software suites such as Maya, 3ds Max, Google Sketchup Pro, ArchiCAD and Rhino to provide real time rendering in a virtual production environment. The MachStudio Pro software fits into the creative pipeline after all 3D models are produced and provides lighting, cameras, materials, compositing and finishing capabilities. The workflow can be likened to a virtual 3D real-time studio environment, allowing artists and TDs to work with lighting, camera views and multi-point perspectives for a real-time view of frames as they would appear in the final rendered format. Version 1.2 of the $5000 product was launched at the show, with demonstrations including a fully rendered ambient occlusion pass updating almost instantly when a scene camera was moved and dramatic real time displacement mapping using a sub-pixel geometry tessellation process supported on the V8750.

The software can also run on NVIDIA cards, but the hardware-based geometry tessellation is exclusive to qualified ATI graphics workstation cards. It can increase the polygon count exponentially, in some instances to more than one billion polygons, without any material drop in the render speed. MachStudioPro also offers specialised shaders for car paint, reflection and sub surface scattering, as well as realtime material creation and stereoscopic camera support.

NVIDIA meanwhile used IBC to premiere the Quadro Digital Video Pipeline, an integrated, GPU-based platform for real-time acquisition, processing and delivery of high-resolution video. Based on the CUDA parallel computing architecture, street prices range from $5,000 to $8,000.

Among the products offered by AJA was the Ki Pro, a highly portable tapeless device that records files to the 10-bit Apple ProRes 422 codec direct from any camera. The company was also showing off its KOMA range of routers, which won two awards at IBC 2009. With a small form factor, the KUMO 1604 and 1616 routers offer features like SDI, HD-SDI and 3G SDI compatibility, as well as web-browser control over a LAN, so allowing integration into any post and production environment. The routers won the Broadcast Engineering IBC Pick Hit Award, as well as the TV Technology Europe STAR (Superior Technology Award Recipient) Award.

Autodesk was demonstrating its colour grading solution, Lustre 2010, which offers a substantial increase in grading power, according to Bruno Sargeant, Autodesk Television Industry Manager, Media & Entertainment. Colourists now have access to 48 layers, with unlimited shapes per layer, so increasing the systems control over final colour and lighting effects. There’s also a new integrated Degrain tool and Grade Bin which will save significant time in the finishing process. Sargeant also highlighted the new support in Lustre 2010 for MXF with Avid DNxHD files as well as RSX file support, which enhances the RED camera workflow in Lustre.  These attributes also form part of the offerings in the 2010 Extension 1 releases for Flame, Inferno, Flare, Flint and Smoke. The extensions further improve interoperability between Flame and Smoke and Lustre with the introduction of bidirectional multilayer timeline exchange and cross product codec compatibility. There’s also a new Substance generator, easy to use presets, expanded format support and general workflow and productivity improvements.

Autodesk has also just launched the Maya Entertainment Creation Suite 2010, which includes 2010 versions of Maya, MotionBuilder and Mudbox, as well as featuring an integrated compositing component in the shape of Toxik. There’s an alternative version of the suite that replaces Maya with 3ds Max 2010, as well as Animation Suite versions for Maya and 3ds Max which only feature MotionBuilder as the extra package. Autodesk claims buying the suites will provide up to a 35% saving over the RRP of previous product offerings. Also on the launch pad is Softimage 2010, which includes a complete Face Robot toolset, new GigaCore III architecture, Expanded ICE capability and new tools to enhance productivity.