A new report shows a clear opportunity for a new film and TV studio facility in Scotland, and recommends the building of a foundation studio should a call on the private sector fail to attract proposals for production space.
Commissioned by Scottish Enterprise in partnership with Creative Scotland and the Scottish Government, the EKOS report says tax incentives have created a surge of interest in filming in Scotland and this is driving demand for studio space.
Film City Glasgow has long been prominent in a campaign to have a studio built in the vicinity of its Clydeside premises at Pacific Quay. However, last year the lack of an existing purpose-built studio saw Sony Pictures Television and US cable network Starz take on a converted derelict warehouse in Cumbernauld for production of the Outlander sci-fi/fantasy series. The converted facility, now known as Wardpark Studios, currently offers two sound stages, with an additional 65,000 square feet of facilities planned. A deal has been made with the producers to have certain production resources left behind when the show leaves, to help the studio to continue functioning.
The new report has assessed several potential options, including Pacific Quay and Wardpark, but recommends that representatives of the private sector be invited to submit their own development briefs for a new studio facility. Information has been published today on the Public Contracts Scotland website, to invite proposals from the private sector for developing opportunities for production space for film and television in Scotland.
If this request for proposals fails to identify a suitable commercial project, today’s report recommends public sector agencies should concurrently proceed with a detailed appraisal and business plan for a Foundation Studio. As recommended in the report this would be delivered on a phased basis, comprise two soundstages, two workshops and production offices and would cost in the region of £15m. It is also a first phase of what could in time become a larger studio complex, even attracting future private sector investment should it prove successful. The report makes clear that EU state aid issues would have to be addressed in considering such an investment.
Several previous studies have examined the feasibility of a production space/studio in Scotland – there have also been some attempts to encourage the private sector to invest in the past. However the authors of the report say the differences between those studies and this report are significant. They include: 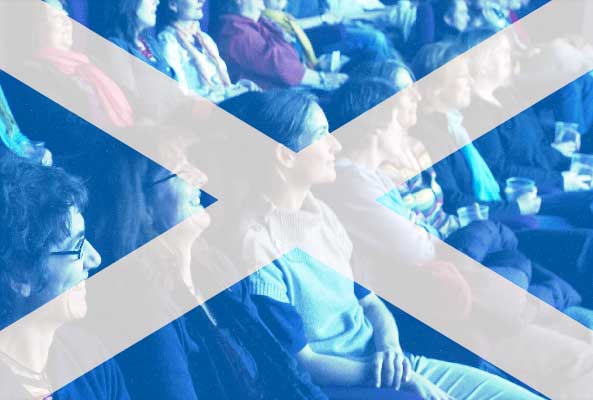 Hyslop continued:“We have consistently championed Scotland as a location for international film and TV productions and we work hard to ensure Scotland is widely recognised for its world-class talent, crews, facilities and breathtaking locations. Scottish ministers are firmly committed to supporting a sustained increase in production.”
“These are very exciting times for the audio visual sector and we’re seeing an encouraging growth in high-end television production in Scotland,,” said the Culture Secretary. “Public agencies worked hard to source suitable premises for Outlander to consider, and we are delighted that this major production is now filming in a 140,000 square foot studio established in Cumbernauld. But we recognise that to provide more opportunities for Scottish production we need additional studio space. That is why we worked with Scottish Enterprise and Creative Scotland to commission this report.”
“Today’s report recommends that we investigate the creation of a Foundation Studio in the event that a private sector bid for additional studio space is unsuccessful,” noted Hyslop. “I welcome this recommendation and will be exploring this further with the relevant agencies.”
The full EKOS report is available at www.scottish-enterprise.com/filmstudio