Following on from the success of award-winning app Streetmuseum, the Museum of London has joined forces with AETN UK’s flagship channel History to develop a new app which gives users the opportunity to see Roman London as it was 2,000 years ago. 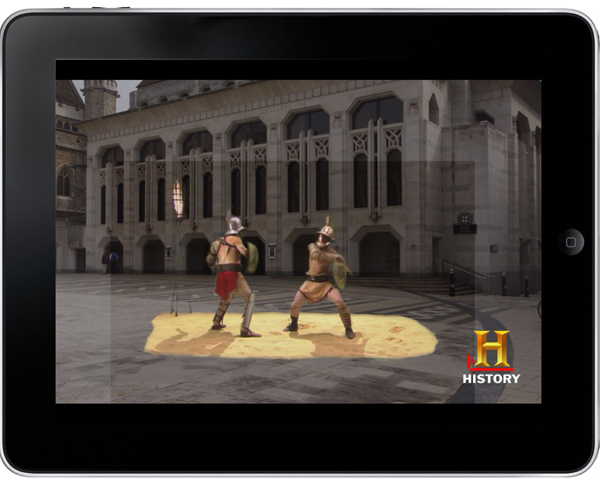 Streetmuseum Londinium directs users to locations across London where they can immerse themselves in the sights, sounds and remains of Roman life. At the city’s peak in AD 120 approximately 25,000 Romans lived in London, leaving much behind to explore today.

Users can digitally excavate Roman artefacts, including leather bikini briefs and an ancient manicure set, which tell the stories of life in Londinium. Using their finger to dig and by blowing on their iPhone, users will gradually reveal the objects where they were first found in the capital.

Key Roman sites in London, such as the amphitheatre at Guildhall, will be brought to life through augmented reality video – produced by History – which will overlay scenes of Roman London against today’s modern backdrop. Soundscapes will also allow users to listen to the hustle and bustle of the forum or the sounds of ritual incantation at the Temple of Mithras. 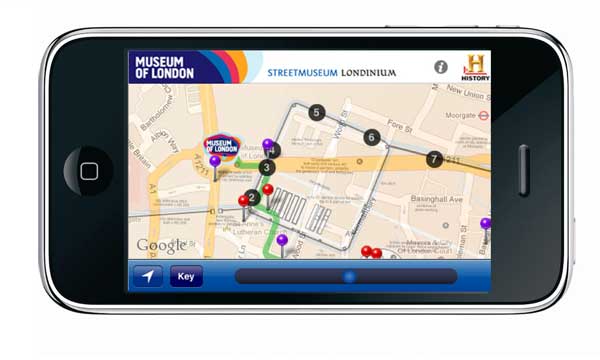 All these immersive experiences will be brought together on a new map of Roman London – compiled and produced by Museum of London Archaeology – which will be superimposed on a modern map of the capital, allowing users to see how the city has changed and grown over the last 2,000 years.

Launched in May 2010, the original Streetmuseum brings the Museum of London’s extensive art and photographic collections to the world, guiding users to over 200 sites across London where hidden histories of the city dramatically appear.

Users can look through their phones and see the past emerge, locked as an overlay across the present scene. These can be viewed as ghostly alignments, or the archive images can be brought up and explored in detail, along with information about the Museum’s photographs and paintings. So far 200,000 people have downloaded Streetmuseum worldwide, from Argentina to New Zealand.

Both Streetmuseum and Streetmuseum Londinium were produced by creative agency Brothers and Sisters. Kevin Brown, Digital Director for Brothers and Sisters, said of the new project: “The new application builds on Streetmuseum’s ground-breaking innovation with the introduction of experiential firsts: a unique augmented reality video experience and virtual artefact excavations. Once again, we’ve redefined the parameters of experiencing history beyond the traditional audio tour or exhibition, giving users a taste of Roman London, either on location or from the comfort of their own home.”

Vicky Lee, Marketing Manager for the Museum of London, said the success of Streetmuseum had shown that museums could bring history to life in new and exciting ways. She described this as ‘taking their collections to the streets rather than relying on visitors coming to them’.

“With the launch of Streetmuseum Londinium, we’re going a step further,” she continued. “We’re allowing iPhone users to unearth evidence of Roman London as if discovering these artefacts for the first time.”

“History is an exciting TV brand that brings history alive in people’s everyday life in entertaining and engaging ways,” said Kiera Doherty, Digital Marketing Manager from AETN UK. “Through Streetmuseum Londinium, we wanted to inspire people to know more about their city and to have fun with history.”

To celebrate the app’s launch, History is dedicating a whole day of programming to Roman history with Roman Empire Sunday, taking place on Sunday 31 July in the UK.

Get apps and more information from the Museum of London