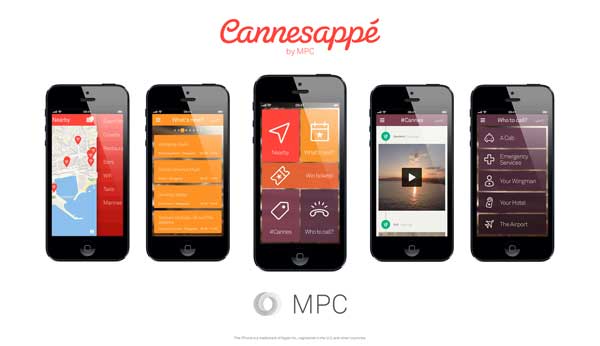 The team at MPC Creative has re-released its Cannesappé, a handy guide to Cannes Lions 2014, the  biggest festival on the ad industry calendar.

Interactive Creative Director at MPC Creative, Andre Assalino,said “We had overwhelmingly positive feedback for Cannesappé 2013, with requests pouring in for a 2014 version. It’s a passion project of ours, and with the skills in-house to make it happen, we thought – why not?”

Collating the most useful info within a simple, intuitive design, the app features have been carefully designed to work both on and offline. Access to essential information such as detailed street maps, taxi and useful numbers, a detailed event and party calendar and the location of free Wifi spots, are all accessible offline without sucking important data and battery life.

Following on from the success of the 2013 App, there will be an opportunity to obtain ‘Golden Tickets’ to some of the most sought after parties. Simply by tapping the win tickets icon, anyone can be in with a chance to receive an invite for themselves and a friend to one of Cannes’ most exclusive parties, including the shots Cannes Beach Party, Music+Sound International Party, P.I.G./Tantor/TaProd poolside BBQ party and the Biscuit Soirée.

Thought has also been given to additional online features including up-to-date crowd cluster maps. And whether you are attending Cannes this year or not, you can see what everyone else is up to through the social feed, featuring the latest Cannes tweets, pics and video uploads all in one place.

MPC’s Cannesappé for iPhone is now live and available for free on the App Store.