Jim Henson’s Creature Shop won an Engineering Emmy at the 61st Primetime Emmy Engineering Awards in August for a remarkable innovation in animation. 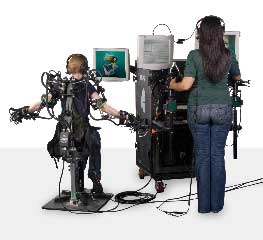 Back in 2002 I wrote a feature on CGI in film production for Creation magazine. Among the people I interviewed then was Sean Feeney, then a London-based digital VFX producer for Jim Henson’s Creature Shop. During the interview Feeney described Helix, a proprietary character animation system that combined animatronics and CGI, making use of Henson’s expert puppeteers to animate digital characters.

Now the Helix concept appears to have evolved into the Henson Digital Puppetry Studio, or HDPS, winner of an Emmy Engineering Award. This proprietary technology offer a real-time animation system that allows performers to puppeteer and voice digital characters in real-time, dramatically reducing both animation time and cost.

HDPS was used for the production of the highly successful, Emmy-nominated animated children’s program “Sid the Science Kid,” produced by The Jim Henson Company and KCET/Los Angeles, and enabled the Creature Shop to generate 40 episodes of HD computer-generated imagery within a year.

“When we embarked on this project, we searched for the best technology out there, and NVIDIA quickly became our graphics solution of choice,” said Steffen Wild, director, Henson Digital Puppetry Studio. “Since then, a great partnership has emerged, enabling us to achieve this new form of creative expression.” 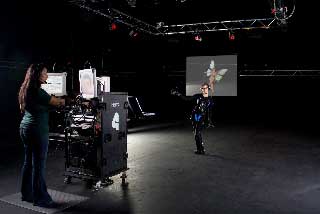 In the studio, live performers are tracked to map their body movements onto digital puppets. Simultaneously, puppeteers who voice the characters also manipulate the facial motion and lip-synch, using a special mechanical input glove device developed for the right hand, and a joystick-type device for the left hand. This occurs with a director, camera and production crews exactly as it would on a live-action set, and comes together virtually, in real-time, using the Creature Shop’s proprietary software which marries the stage components with the show’s digital environments on the fly. This unique process can be replicated for any film, television, game or interactive production. 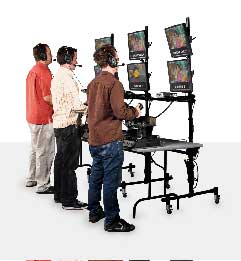 As well as Sid the Science Kid, the HDPS has recently been contracted for application in live event presentations, commercials, feature film visual effects, and game development.

“We have been developing our production pipeline for the past several years, based on the vision of Jim Henson, who started exploring the possibilities of digital puppetry back in 1989,” continued Wild. “Back then, computers weren’t fast enough to provide real-time feedback. However over the past few years, graphics processors have truly evolved. Today, our viewing software delivers an entire scene in real-time, and its performance is driven by the NVIDIA Quadro FX solution.”

Dominick Spina, Digital Film Technology manager at NVIDIA, said the company was thrilled that The Academy of Television Arts and Sciences was recognising the Henson Digital Puppetry Studio. “By harnessing the power of the NVIDIA processor, Jim Henson’s Creature Shop is truly driving innovation and materially enhancing the creation of television programming.”