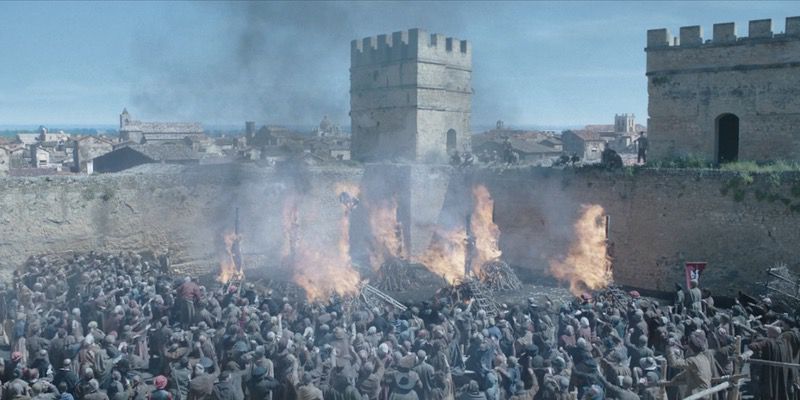 Twin Pines’ team of 35 VFX artists created over 500 shots for the hugely successful Spanish TV series La Peste (The Plague). The Madrid-based VFX studio worked over a period of ten months on the Movistar+ production, set in 16th-century Seville. Created by Alberto Rodríguez and Rafael Cobos, the first season of The Plague, consisting of six 50-minute episodes broke viewing records and is the costliest TV series ever made in Spain.

Twin Pines started working on the project long before shooting began. An initial phase of contextualisation, followed by execution, took up to ten months. “One of the biggest technical problems we came across was that, unlike other productions we had done before, we worked in different sets in which the cameras moved freely in 360 degrees”, recalled Juanma Nogales, VFX supervisor at Twin Pines. “Using immersive techniques, we had to insert the computer-generated elements.” 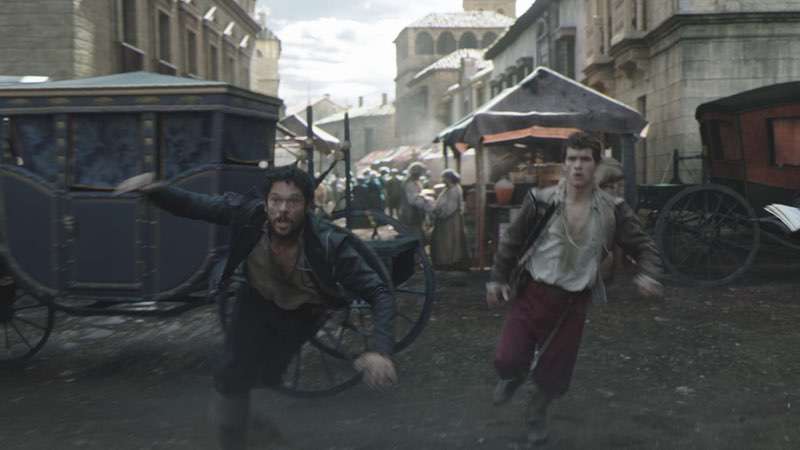 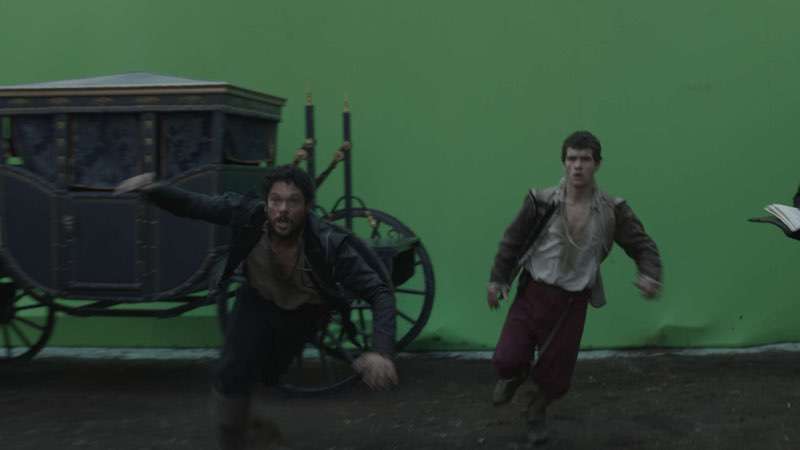 Nogales is speaking at FMX in Stuttgart this week, discussing the use of Nuke Studio in making La Peste. The Foundry’s software played an instrumental role in the project, enabling VFX, editing and finishing as well as compositing major digital set extensions and CG backgrounds. The whole process generated around 50TB of data for VFX and over 19,500 hours of rendering. 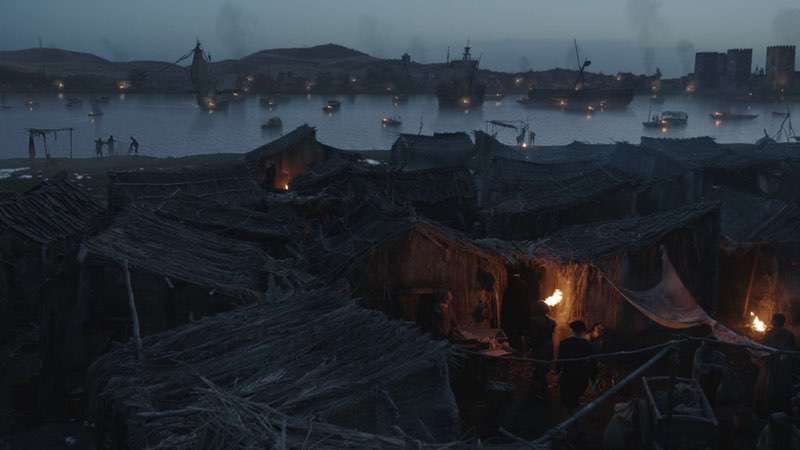 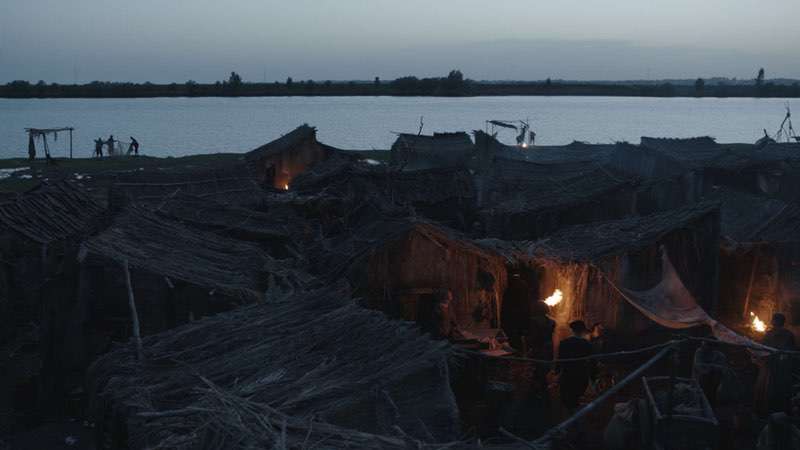 One of the most complex parts to replicate was the port of Seville, one of the most important in the world at that time. Twin Pines solved the problem by recording several images of the Guadalquivir river around the area of the Isleta in Coria del Río, which was then digitally enhanced to achieve an result faithful to history. The team at Twin Pines also had to model the ships and galleons in the port in 3D, which were then integrated into the different scenes. 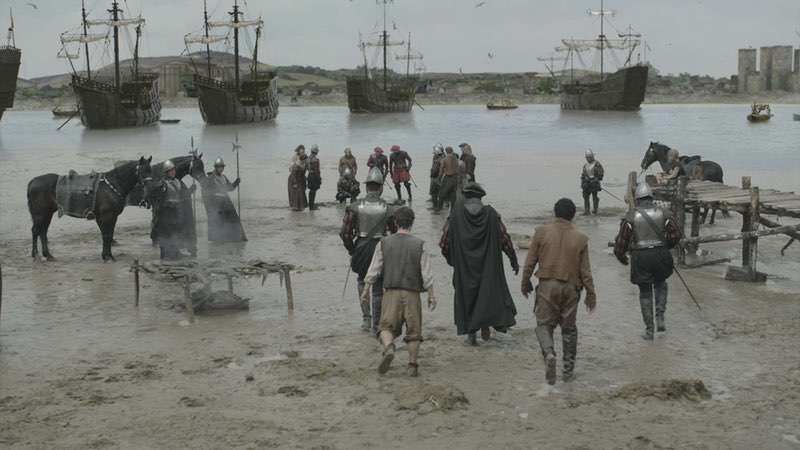 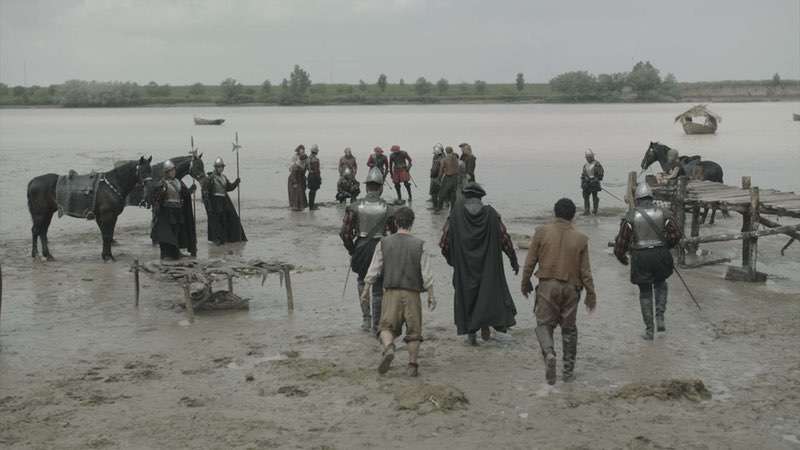 CG crowds were also a major feature of the production. In one of the episodes, 15,000 people were recreated, after digitally scanning 100 extras and their clothing, to fill a massive space. 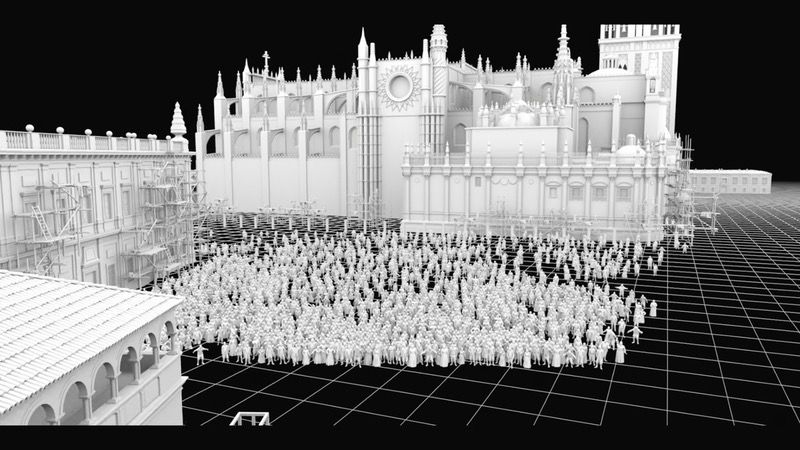 At the beginning of the first episode, the main character appears on horseback looking down on Seville from a distance. In fact, the character was on a horse in front of a green screen situated on a hill overlooking a motorway and then composited into the completely 16th-century CG Seville countryside. 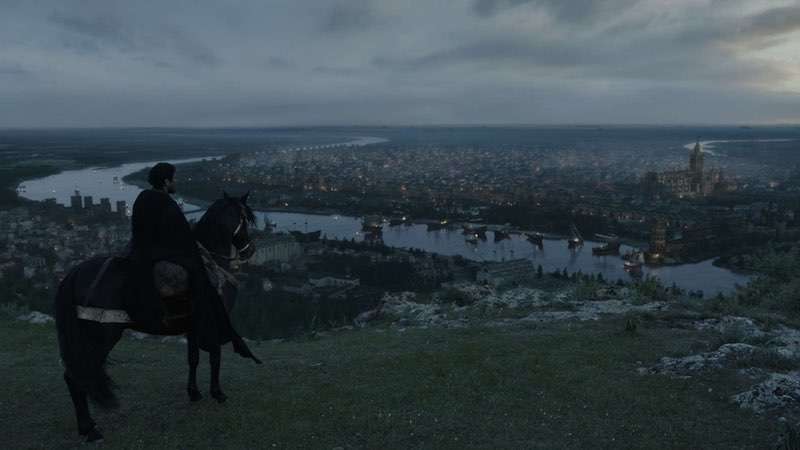 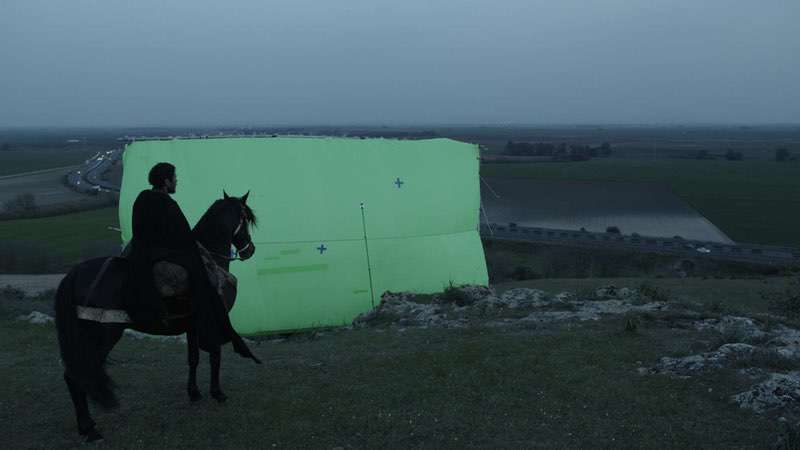 According to Twin Pines, the biggest challenge was digitally recreating the city of Seville of the period with the same historical gravity as a history documentary. To this end, throughout the production process the team worked alongside historical advisors, documentary makers and an art director for VFX. 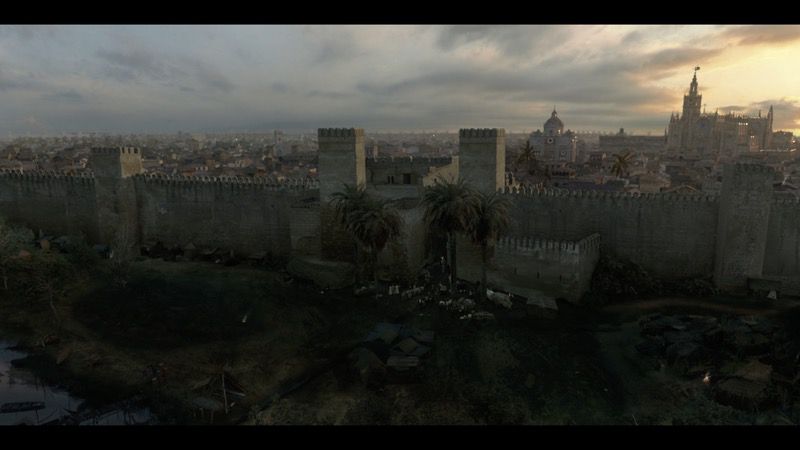 The development of visual layers and the creation of 3D CGI elements relied heavily on maps, etchings and paintings from the period. A large part of the buildings and monuments that feature in the series are not actually from Seville, but instead use similar buildings as references, many of which were photographed and rebuilt in 3D, such as the cathedral, the city walls, the poor quarters, the city gates and St George’s Castle. 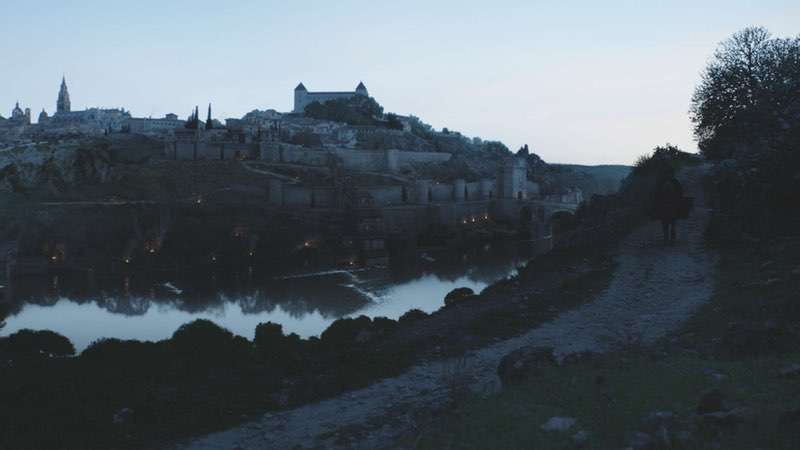 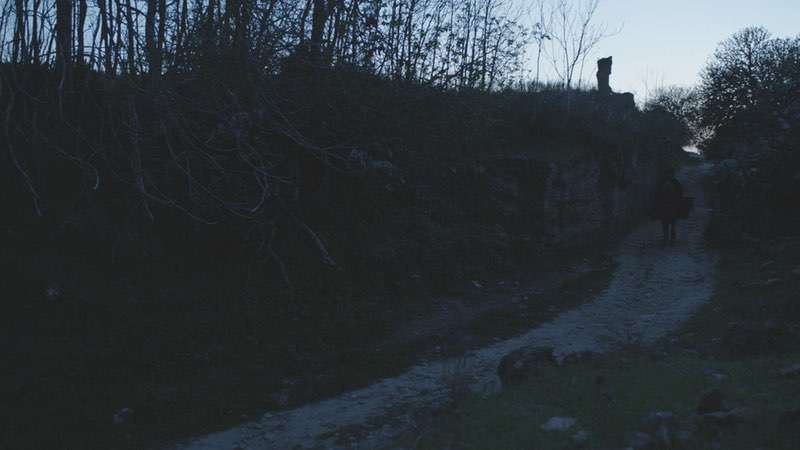 “The job of reconstructing the city was formidable, given that there is practically nothing existing today of 16th-century Seville”, explained Juanma Nogales. “It required a painstaking process combining historical seriousness with aesthetic taste. And that’s where the collaboration between all the different teams came in: art [Pepe Domínguez], make-up [Yolanda Piña], photography [Pau Esteve], VFX [Juan Ventura, Juanma Nogales], and postproduction [José Moyano, Iván Benjumea]. Unless everybody is on the same page, working in the same direction, such an ambitious production as The Plague would not have been possible. And the results are there for everyone to see.” 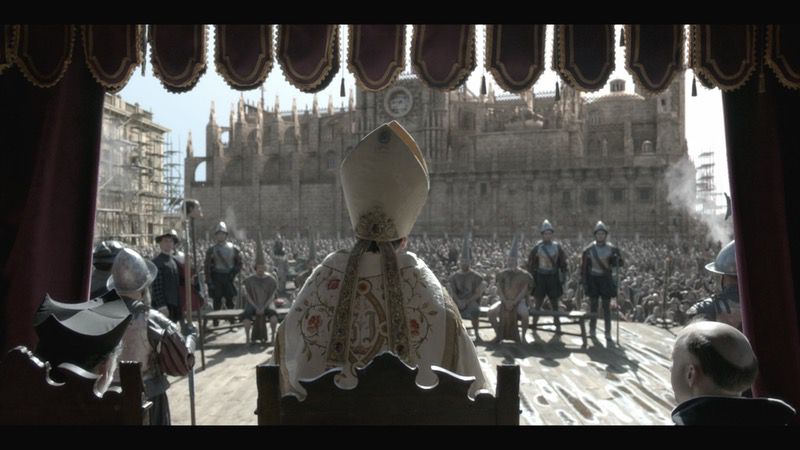 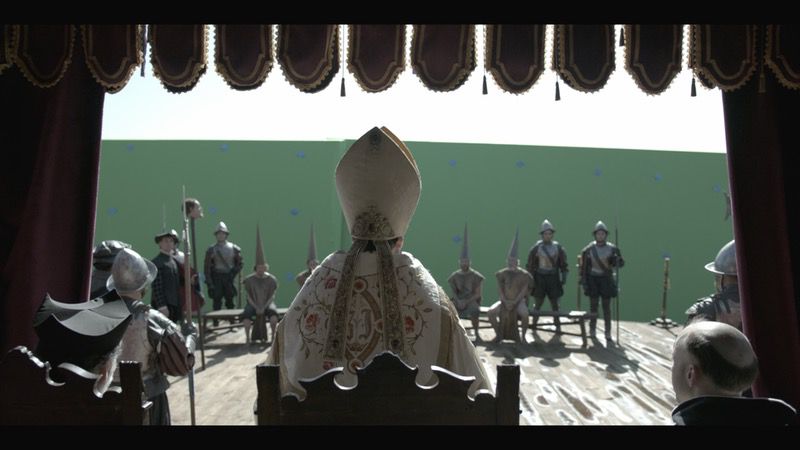 View the reel by Twin Pines of effects from The Plague