Impressions of the Huawei P20 Pro – your next everyday camera?

When discussing tools for photography, one statement you’ll always hear is ‘the best camera for the job is the one you have with you’, and in many day-to-day cases this will be the camera on your phone.

I’ve been grabbing pictures on a variety of phones for several years (and for longer on a variety of cameras) – in fact, photographic ability represents a major factor in every smartphone choice I’ve made. I’ve been using the Motorola G4 Plus for a year or so, and it’s served me fairly well. Like many mid-range smartphones, it’s great for a quick portrait pic in good light, and this one is particularly decent with landscape shots. However, image quality definitely suffers in low light and when zoomed in.

Then Huawei presented me with its new P20 Pro for review, a top of the line smartphone that features a unique three lens configuration developed in conjunction with. At its press launch in Paris at the end of last month, Huawei claimed quality and photographic abilities for the P20 Pro of a level that I’ve never before encountered on many cameras, never mind a phone. ‘Experience point and shoot perfection’ was one of the headlines in the accompanying promotional copy. ‘A RenAIssance in photography is here’ was another, pushing the ability of the phone AI to understand a scene in real time. According to Huawei, the camera has the chops ‘to shoot the ultimate beach or landscape shot’, as well as incorporating ‘pixel perfect bokeh’ and professional studio lighting effects. There were also headline claims for the quality of low light and night shots without a tripod. Basically, the company is saying you could use this phone in place of a separate camera for most of your everyday needs – the press launch saw pro photographer Mel Bles detail her use of the P20 Pro on the streets of Paris, as well as on a fashion shoot. The results were impressive.

Whenever I go anywhere, I usually have a DSLR with me, stowed in a bag. But now I have my hands on it, could this phone really be all I need with me on a trip, a walk-around camera that allows me to get those ‘ultimate photos’ as Huawei claims?

At £799 to buy outright, this is not a cheap option for a phone, but the price compares favourably with the Apple iPhone X and Samsung Galaxy S9+ models against which Huawei has launched the P20 Pro. I’ve not used any of these devices, so this can’t be a comparative review. If you want to compare specs, or get into arguments, there are plenty of places to do so.

The P20 Pro is beautifully designed in glass and metal, IP67-rated for very decent weather and dustproofing, and a remarkably slim 7.8mm body. The screen on the P20 Pro (there are two lower-specified models in the range) is a 6.1inch OLED FHD+ (2240×1080 pixel) display, with an unusual aspect ratio of 18.7:9 and HDR10 support. This is an incredibly bright and colour-rich screen. In short, it looks and feels high quality. 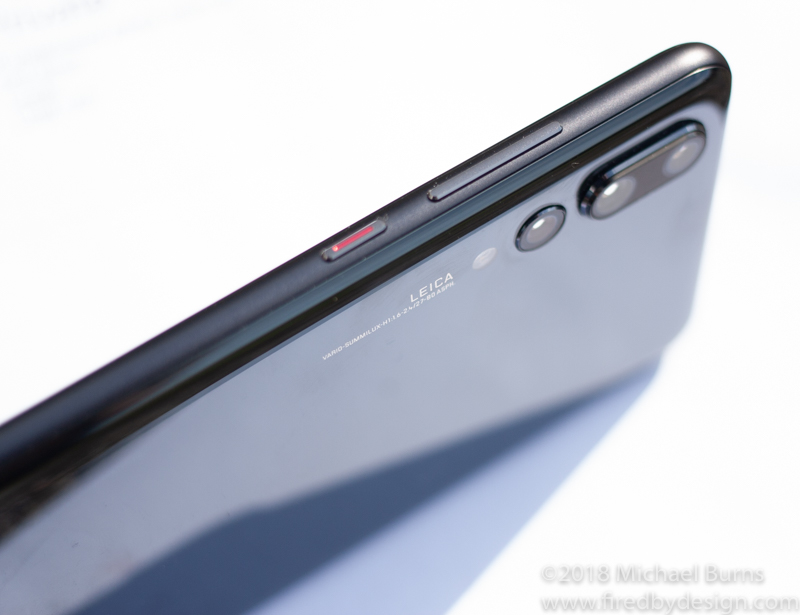 As a phone, it’s lightning fast, thanks to the Kirin 970 processor with NPU. This Neural Processing Unit drives the Huawei AI assistant that powers just about everything that’s new on the camera side, as well as many of the phone apps.

The model Huawei supplied ships with 6GB of RAM, a generous 128GB of storage, and 4000 mAh battery for equally generous life (here again the other P20 models have less to play with). The fingerprint sensor is highly responsive, offering a much-improved experience over similar access functions I’ve encountered, while the face unlock facility goes one stage further in terms of personalisation. Equally fast performance and a wealth of features comes courtesy of the Huawei’s EMUI 8.1 interface running on Android Oreo (8.1). There’s a lot here to take in though – I found more features under the surface after a bit of a hunt to find the user guide, but there’s definitely more than meets the eye.

As for ears, audio is brilliant, with Dolby Atmos speakers able to fill a room – but there’s no headphone jack. A headphone adapter is in the box for plugging into the USB-C port however, and there will also be a pair of ‘FreeBuds’ wireless earbuds available (at an extra €160).

The photography and other creative features are what we’re most interested in though and this is where it gets even more impressive.

The standout feature is the Leica triple camera – a first for smartphones. The three-lens array incorporates a f1.8 main lens with a 40-megapixel RGB sensor for high definition colour, and a faster f1.6 monochrome lens (as well as B/W shots, it provides greater depth of field, less noise and higher contrast) supporting 20MP – both have 27mm (35mm equivalent) focal length. The third member of the Leica triumvirate is a f2.4 lens with a 3X telephoto (80mm) delivering 8MP. The latter also offers optical image stabilising (OIS), and a 5X ‘Hybrid Zoom’ function to add ‘detail from a distance’ through software processing. A f2.0 selfie camera is incorporated into the notch on the front screen of the P20 Pro, offering a very decent 24MP. Although capable of 40MP, and more in RAW mode, the camera’s ‘Light Fusion’ technology can blend the output of the P20 Pro to create brighter, clearer 10-megapixel images, as standard.

As stated, I usually encounter problems with smartphone photos at low light levels. Unless you’re lucky, you have to contend with blocky pixel blobs of colour with no real definition, as well as blown highlights, so for me the most interesting facet of the Huawei marketing push was the light gathering capability of this phone. At its press launch, Huawei quoted a top ISO rating of 102,400 for the P20 Pro, comparing to that on the Canon 5D Mk iv, which is a pretty big boast when compared with the 6400 ISO for other premium smartphones. Huawei also states that the P20 Pro offers the biggest pixel size available on any smartphone, at 1.55 μm, and it has a sensor that’s twice as big as competing models.

What does all this get you? Well, the proof is in the picture, and pictures on the P20 Pro were super detailed and razor sharp in most circumstances. The contrast is excellent and colour rendition is generally superb (with some exceptions). The fact that this is a very light-sensitive smartphone also allows for a number of very interesting features.

The P20 Pro’s new star feature allows you to take high quality shots at night or in near darkness without a tripod. It does this by building up the scene in a series of images, presumably with the AI adjusting for camera shake during the handheld process. And it works very well indeed, resulting in rapidly processed images with a wide dynamic range. The usual amount of time is around 4 seconds, but a garden shot at night took 10 seconds to complete (held flat against a window) and the results were very impressive. Low light performance is also very good on the whole, with a portrait shot in a very dark castle storehouse with light coming from one side giving a particularly nice result.

However, there was no sign on the camera of that super-high ISO rating, with the actual top figure seeming to be 3200 ISO. The Huawei website seems to suggest that this will be available via an upgrade, but I couldn’t find any other information.

The Wide Aperture setting is an excellent tool for selective focus and depth-of-field effects. It makes use of both the monochrome and main lenses working together to provide depth and extra detail – a slider increases or decreases the digital aperture, from f0.95 to f16, and thus the range of focus. It’s probably the most used feature on this phone at the moment. Dialled down, it not only isolates points of interest and boosts the colours, but it’s also ideal for fast action shots, if you manage to get the focus right. The added bonus of the twin lens approach is that you can adjust the depth of focus after you’ve taken the shot. Selecting the image in the Gallery also allows you to adjust the colours and add even more effects.

One thing that might improve Aperture would be a way to adjust it with a hardware control (as Huawei has done with focus for video), but that might just be a button too far.