Adobe wraps up a ‘Mighty’ MAX with Sneak Peeks 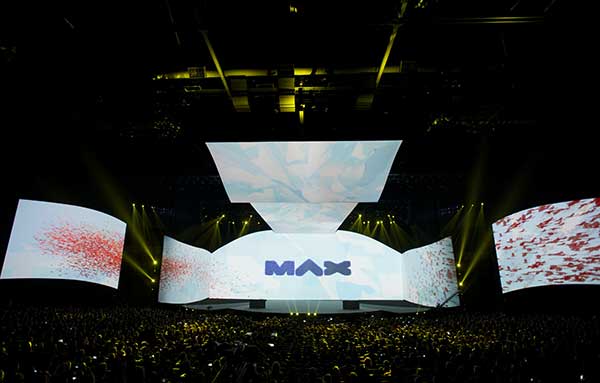 Adobe has presented a behind-the-scenes look at cutting-edge design and interactive technologies to round off MAX 2013, held over the past several days at the Los Angeles Convention Center. Now sub-titled The Creativity Conference, this annual Adobe developer shindig also saw updates to the company’s creative product line and  new cloud-connected hardware, as well as announcing its transition from traditional boxed products to a wholly subscription based model.

Adobe’s desktop tools, previously known as Creative Suite (CS), are now branded ‘CC’ to reflect that they are an integral part of Creative Cloud and now support a more connected workflow. 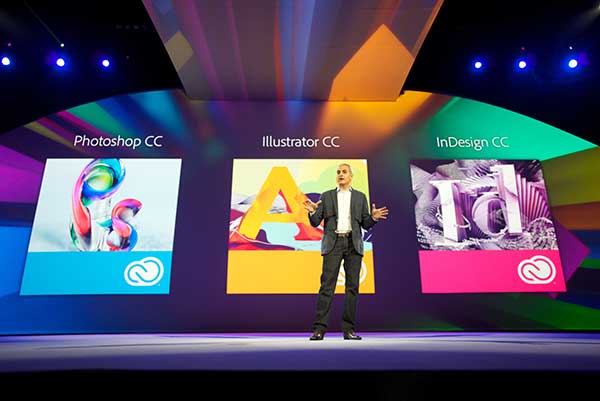 It also included the news that Behance would now be integrated with Creative Cloud, allowing members of the worldwide creative network to publish their own portfolios, follow other creatives, publish work-in-progress from within a growing number of CC apps and solicit feedback.

New features are included in the updated and rebranded versions of Adobe’s desktop tools, available in June:

The pen is Mighty

Also at MAX, Adobe’s Experience Design (XD) team revealed project Mighty, a ‘Cloud Pen’. Mighty is pressure sensitive, which helps it draw a natural and expressive line. Created with the help of industrial design firm Ammunition and MindTribe for the electrical and mechanical engineering, Mighty has a three-sided, twisted form that is inspired by the ergonomics of holding a pen. It is also connected to the Creative Cloud through the software and a local Bluetooth LE connection. It can use this connection to pull up Kuler themes and enable a ‘cloud clipboard’ which gives you access to assets you have saved to the cloud for reuse. 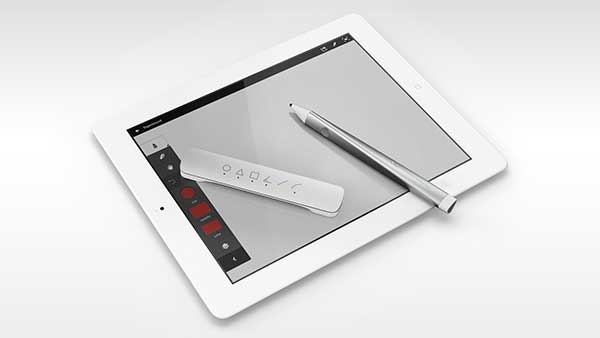 A second XD tool, codenamed Napoleon, is complementary to Mighty. This digital ruler is designed to bring back some of the feeling of drawing with analogue tools like the t-square and triangle. It creates a digitally projected edge for accurately drawing shapes and lines.

Project Context is the final piece of the ‘explorations’, intended to be combined with InDesign and the Digital Publishing Suite as a new way of assembling and managing assets, with a view to collaboratively organise and eventually even edit and publish them.

Read more about the XD projects in this blog by Michael Gough, Adobe’s VP of Experience Design 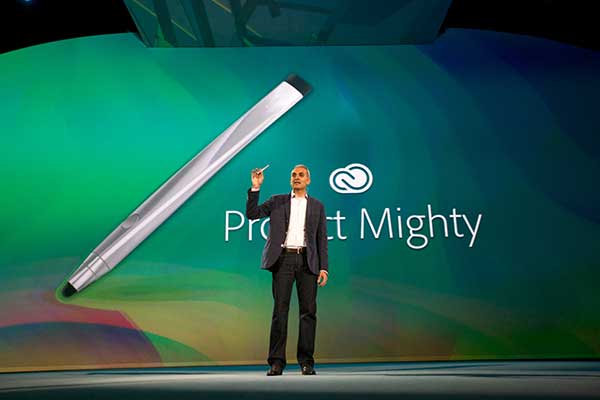 In what has become a tradition, MAX Sneak Peeks offer a unique opportunity to see inside Adobe’s engineering labs and to preview breakthrough applications and features during their early stage of development. For example, the new Camera Shake Reduction tool, that analyses and corrects blur from camera movement, which was unveiled as part of Adobe Photoshop CC on May 7th, was actually first shown publicly at MAX Sneak Peeks in October 2011. However projects shown may, or may not, make it into future versions of Adobe products and services. 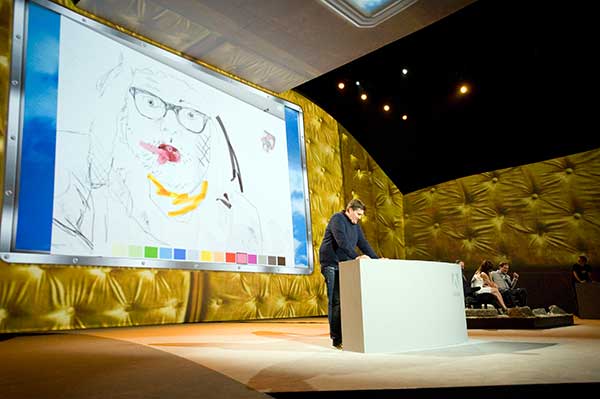 “The Sneaks embody the spirit and passion for technology innovation that thrives at Adobe,” said David Wadhwani, senior vice president and general manager, Digital Media Business, Adobe. “The presentations are always a sensation at Adobe MAX; the energy and enthusiasm from the audience is electric and demonstrate that our creative customers are always ready to embrace the new.”

Here are some of the MAX 2013 Sneak Peeks from earlier today, hosted by Rainn Wilson and special guest Mary Lynn Rajskub, with Ben Forta, director of Evangelism, Adobe:

Playing with Lighting (After Effects & Photoshop): A sneak which lets you experiment and tweak image lighting based on a selected sample and turn your home movies into blockbuster hits (or at least make them look the part) by adjusting lighting modeled on any movie you choose.

Audio Layers: Separating desired audio from background noise is a painful process. Or rather, it was. Use a visual editor to paint the sounds you want while identifying those you don’t, and this tool will do the rest.

Perspective Warp (Photoshop): Ever wished you had got closer to take a picture? Perhaps you were not right in front of your subject or took the picture from too high or low? This Photoshop sneak lets you adjust the perspective for parts of your shot while still keeping the rest of the image intact.