Adobe has revealed significant updates to its video products and officially launched Adobe Anywhere for Video in preparation for NAB.

At a preview event in London yesterday, Niels Stevens, Adobe’s Business Development Manager for CS Video, demonstrated features of the forthcoming video tools and Adobe Anywhere collaboration platform. Premiere Pro gains capabilities such as enhanced visual feedback in the timeline, for example a new duplicate indicator that displays on clips to notify users they also appear elsewhere in the sequence. There is full control of nested sequences and new shortcuts for faster, keyboard-driven editing. A new Link & Locate feature with auto-search offers a big improvement for users needing to quickly relink media, and there’s an expanded set of supported media formats.

The addition of the Lumetri Deep Colour Engine into offers more powerful colour workflows in Premiere Pro, allowing editors to easily apply rich colour grading by dragging look files created in SpeedGrade onto an adjustment layer on the timeline. Multi camera sequences can now be built by automatically syncing up rushes based on the audio within them. This is in addition to the existing methods, based on in/out points or timecode of the clips. It’s also possible to flatten multicam cuts into a basic sequence for export. Audio enhancements include monitoring for broadcast compliance via the newly integrated LoudnessRadar from TC Electronic and a new audio clip mixer, enabling levels to be adjusted on a per-clip basis.

There’s also the new ability to import existing projects, or just selected sequences, into an open project. Stevens claimed this addressed the call from users for support for multiple open projects.  “People thought that they wanted multiple projects open, but that would just be unwieldy,” he said. “There would be an enormous amount of clips and bins scattered everywhere. This gives you what I think people actually need, which is to bring a sequence in from one project into another.” 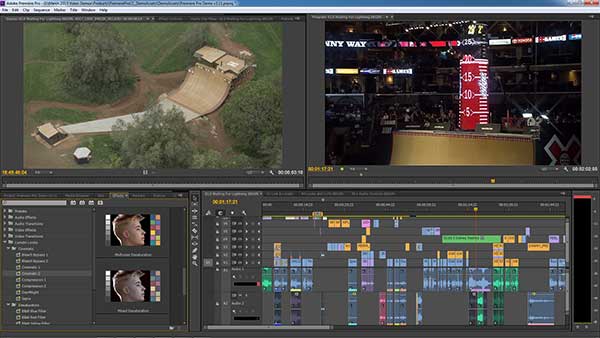 There’s a new Live 3D Pipeline for After Effects in conjunction with Maxon, which will see Cinema 4D Lite bundled with the Adobe application. “55 percent of our After Effects users working with 3D were using Cinema 4D  – without there being any prescribed workflow to go back and forward between the platforms,” said Stevens. “It was just an absolute nightmare of data wrangling using third party tools. It’s now completely integrated. You can create live 3D rigs and tie them to a comp in After Effects using the 3D Camera Tracker, having the objects marry up together. It’s going to save many hours”

In addition, a Refine Edge tool enables faster, superior rotoscoping results and the Warp Stabiliser VFX feature allows users to stabilise a specific portion of a shot. Stevens demonstrated the latter with stabilised footage showing an object in the foreground of a framed shot effectively staying still as the background moved. 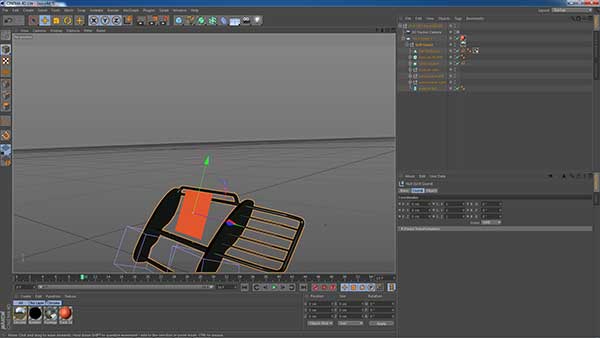 The next version of finishing tool SpeedGrade sports an improved user interface, designed for a smaller screen and to give users faster access to regularly used tools. The new one-click Shot Matcher feature matches clips from different cameras with varying lighting conditions. Colourists can also work in conjunction with Photoshop users to create SpeedGrade looks using still images saved in the DPX and Targa format, with adjustment layers baked in. 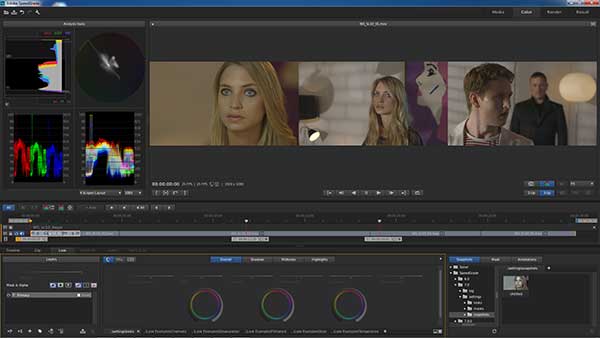 The newly redesigned Adobe SpeedGrade, offering precise control over every aspect of a project’s colour and light

The second version of Adobe’s file-based logging and ingest tool Adobe Prelude  is now a 64-bit application and has seen a lot of refinement. It now highlights clips selected for ingest and has a new ability to hover-scrub thumbnails in the project panel to quickly see imported footage – both top customer-requested features, according to Stevens. Full native support for DNxHD is another big deal. “Many people ask us about mezzanine formats,” acknowledged Stevens. “We were very much of the view that the market doesn’t need any more. We now play very nicely in environments where there are Avid and Final Cut machines as well.”

Prelude is also able to add metadata during ingest and can batch rename while ingesting files. In addition Prelude can ingest unassociated metadata- for example using remote Tablet-based logging to create rough cuts or a Bin Structure, which can form the basis of a new project on ingest.

Editing is also faster with new Adobe Story panels giving Prelude and Premiere Pro users access to Story scripts, as well as the ability to match the script to clips and using Speech to Text analysis. 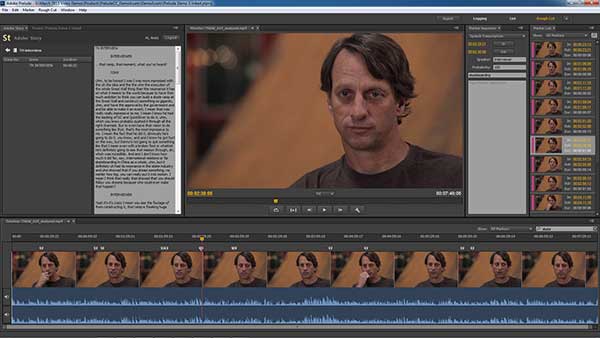 Prelude can add metadata during ingest, and editing is faster with new Adobe Story panels

Also now available as a 64-bit application is sound utility Audition. New creative tools include Sound Remover which builds on the Noise Remover tool from iZotope. It allows users to paint across patterns of noise interference in the Spectral View. “There’s a sound learner that identifies the signature of that noise,” explained Stevens. “It learns it and is able to sample it and pull it out.”

The Pitch Bending tool in Audition offers a range of impressive presets, such as ‘turntable losing power’ and has the ability to match clip duration. There’s also a Preview Editor to help improve overall sound quality, a silence selection utility and the new loudness compliance tool from TC Electronic, LoudnessRadar. 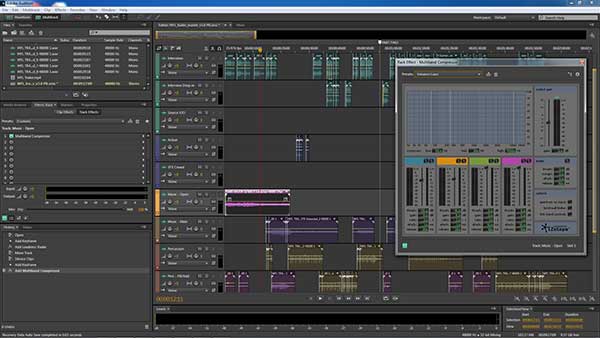 Adobe will demonstrate its new solutions during the NAB 2013 Show at its booth SL3910 in the Las Vegas Convention Centre and will reveal more information about its creative tools at Adobe MAX, running from May 4-8 in Los Angeles.

The company also announced it is offering a special offer aimed at video professionals to join Adobe Creative Cloud for £27.34 (incl VAT) a month for their first year, which is 40 percent off the regular price of an annual membership. Although the new features being previewed at NAB are not yet publicly available, one of the major benefits of Adobe Creative Cloud membership is that members get access to the latest upgrades and features as soon as they are released for no additional cost. This offer is valid through April 19, 2013.

Neils Stevens said Adobe had to date worked with up to 50  partners, including the likes of Chyron and Vizrt, to provide custom panels within their products to interface with Adobe tools. More details of collaborative workflows with broadcast video partners will also be revealed at NAB.

The NAB Show will also see the official launch of Adobe Anywhere, the collaborative workflow platform that allows users of Adobe video tools to work together, using centralised media, across any local or remote networks.  At the heart of the system is the Collaboration Hub which allows remote users of Premiere Pro, After Effects and Prelude to work together using centralised media and assets across any network worldwide. The power is provided by the Mercury Streaming Engine, an adapted version of the Mercury Playback technology in Premiere Pro, that allows the connected users to simultaneously access and work directly with media stored on the central server, rather than proxies.

“We essentially built a blade server with a headless version of Premiere, which runs in video hardware with CUDA-based optimisation,” said Stevens. “If your picture playback is only on quarter of the screen, Anywhere will cut down the bandwidth by three quarters and just send you that stream. If you park on a still frame, it’s going to send you a lossless pixel-by-pixel version of that image. This is something that nobody else does. If you’re on a proxy workflow, you might be looking at a 10 or 20:1 compressed video version of what you’re working on, so if you want to zoom in and check focus, paint or do some fine tuning with pixels, you’re kind of stuck when you’re working with a ultra-low bandwidth version. The Mercury Streaming Engine just knows to send a lossless representation of the still image. If you start frame-bumping some footage, it makes an intelligent decision and sends you some frames for either side.  If you decide to go to full screen playback, Anywhere recognises this and will flood the channel, using all available bandwidth up to a maximum of the original source media to be able to do that for you.”

Stevens also claimed Adobe Anywhere can let users such as freelance editors work virtually from any location where there is standard network connectivity. “It is able to co-exist with office network traffic, and give you a decent playback experience even on a busy noisy LAN,” he added.

Adobe Anywhere is able to operate on existing hardware and network infrastructure, including existing media asset management (MAM) and custom workflow systems. First revealed at IBC 2012 in Amsterdam, the platform is expected to be available for sale through systems integrators in May 2013.

Or see the new features for yourself in these Sneak Peaks