The Meduza Titan, the first fully controllable, lightweight, 3D precision single HD camera with 1080p dual sensors has been released as a solution for 3D television production. Development of the camera was accelerated in response to efforts being made by Sky and other broadcasters to unlock the possibilities with 3D for broadcasters, according to the developer, California-based Meduza Systems. 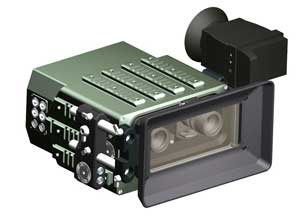 Featuring two 1080p CMOS sensors, Titan is capable of a full range of frame rates, from 24 fps to 120 fps in 10 bit, and has fast, fully motorised inter-axial (the distance between the lenses) and convergence, both essential to quality S3D film making.  Convergence is accurate to 1/1000 of a degree and the inter-axial to 1 micron.  Meduza can also provide motors for iris and focus control.  Weighing 3.5 kg (7.5 lbs), the Titan is crafted of a unique titanium body for lightness and durability. The Titan and its sibling, the modular Meduza MK1 (recently launched at IBC), are not intended to replace rig systems but are completely complimentary.

The camera was announced today by Chris Cary, CEO of 3D Visual Enterprises, the UK parent company of Meduza Systems. “The desire of the consumer for an enhanced 3D television entertainment experience and the pressure on hardware manufacturers and retailers to sell the new 3D enabled hardware, is mandating the broadcaster to deliver,” said Cary.  “There is no doubt that content is king when it comes to driving the television market and right now there clearly isn’t enough 3D television content being produced. An unquestionable demand has been established in the 3D equipment marketplace.”