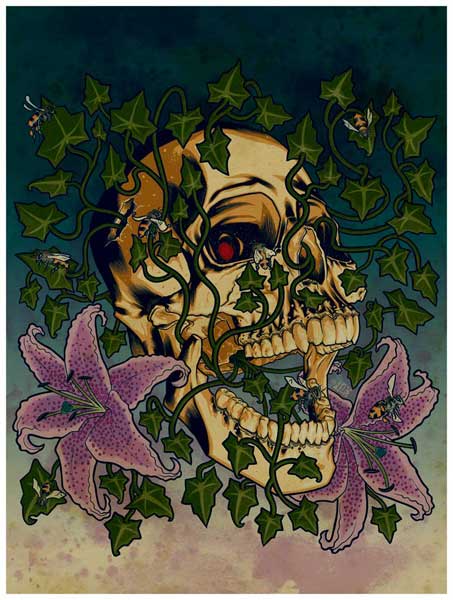 Brian Ewing has become one of rock music and pop art’s most prolific, iconic image-makers, with a roster of clients ranging from Metallica and the Warped Tour, to The Strokes and Death Cab For Cutie, and even The New Yorker and a number of advertising agencies. Remaining down-to-earth and staying inspired are key elements to the growth of his rebellious art empire.  Informed by everything from art nouveau to ukiyo-e woodblock printing, from the full-throttle art of SoCal’s “kustom” car culture to the dynamism and self-assured lines of comics, Ewing’s work fuses his own creative explorations of perspective, colour and space with classic, beloved imagery from rebellious American youth culture: hot punk girls, totally rad skulls, and fields of colour aflame. We caught up with the artist for an interview: 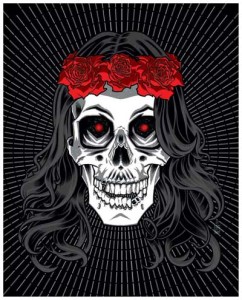 Fired By Design: How did you get started in this field?

I started out by designing black and white flyers for friends in bands when I was a teenager. I was never musically inclined. I was in a few bands for a minute or so, but I really just wanted to do all the artwork. Doing the flyers/posters allowed me to get into clubs and drink booze when I was underage. Tons of fun.

After 2 ½ years I ran out of steam and quit. The job wasn’t fun anymore and going nowhere. And I was beginning to make money with the posters. So with $200 bucks in my pocket, an angry girlfriend and rent due in a few weeks I hit the pavement asking everyone and anyone I wanted to work with to look at my website. I must have contacted about 250 bands, managers, publishers and record labels. After a few days I got hired by BYO Records to design a cover for one of their compilations. I then emailed the remaining 249 people and showed them the job I just finished and that someone took a chance on hiring me. I kept doing that after every job I got. More work followed and I’ve been self-employed since then.

The posters became big-assed business cards for me. The more posters I did for the Troubadour the more people saw them and the more work I got as the result. I’d have to say that not enough of my professional work is rock/metal related. Probably 1/3 of my work is. Even though that’s the music I grew up on. In order to keep food in my belly I have to take on jobs from all types of clients 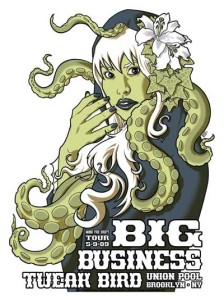 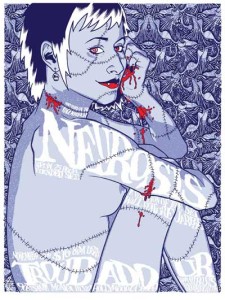 Fired By Design: What do you think of when people talk about metal art? Or to put it another way: what exactly is metal art?

Brian Ewing: Metal art can be anything at this point…which is awesome! Metal art can be brutal, sci-fi, chock full of skulls, creepy, full of naked ladies, robots, monsters, full on black metal typography…etc. It seems (to me at least) that Metal and Rock bands are the biggest proponents to hiring illustrators and using art for their album covers. Just look at the ads in most music magazines. It’s amazing and kind of telling of the rest of the music industry. Metal hasn’t changed. It goes in and out of fashion with the general public but still holds onto the traditions started by bands since the seventies. It’s a bit juvenile, evil, sexy or just damn cool.

Artwork helps bring across the band’s concept. Some bands wouldn’t be half as succesful if they didn’t have a way to visualize their music. Case in point would be Iron Maiden. I never would have bothered listening to them if it weren’t for the artwork Derek Riggs had done for them. Their music made more sense with the artwork. I’d stare at the album covers while listening to their music and and could relate to the music and imagine what they were singing about. Also some of the bands understand the value and impact good album art & packaging can have.

Fired By Design:Has the gig poster or another format taken precedence now that most music is downloaded? 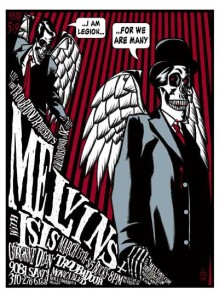 Brian Ewing: Yeah totally. I think gig posters are the next best thing to the album cover. Also they’re more tangible than a 4”x4” jpeg of a CD cover. I still collect posters and if I love the band but the artwork looks awful… I won’t buy it. Same thing goes for t-shirts. 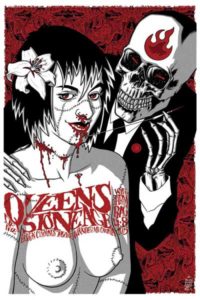 Fired By Design: Do you think an illustrator can still make a living designing album covers?

Brian Ewing: Not anymore. That ship has sailed. Unless you just crank out half-assed work and don’t care. Illustrators need to be more savvy with their business and their goals. Focusing on one genre or avenue for their art can limit them tremendously. There’s a lot you can do as an illustrator working in the misic business.

Fired By Design: Some people think that artwork for rock and metal bands / labels is far better artistically these days and has steered away from the misogyny of some traditional albums. What is your take on this?

Brian Ewing: I agree but I also think it’s that the album art was dictated by the times. Back when metal started only stoner guys with army jackets listened to the music. These same guys read comic books, HP Lovecraft and loved porn. So it didn’t take much to get their attention. It was geared toward teenage guys. Nobody else cared for it. Also if an album got banned for sex or violence it sold more copies. Take Guns n Roses “Appetite for Destruction” –Robert Williams painted the original cover and it caused a big controversy – which didn’t hurt the artist or the band when it became national news and highly sought after.

Now that rock and metal are universally appreciated there are far more people from different walks of life creating music and buying it. The music is growing up a bit and so is the marketing. There are still bands that have gruesome or mysogynist art and prosper from it. Some bands are still singing about storming the castle or making sweet sweet love to their stripper girlfriends. And they have an audience that totally loves it. Then there are the straight-edge Christian Metal bands who go in a different direction with their packaging and do just as well if not better.