Control and create with Photoshop – on the iPad 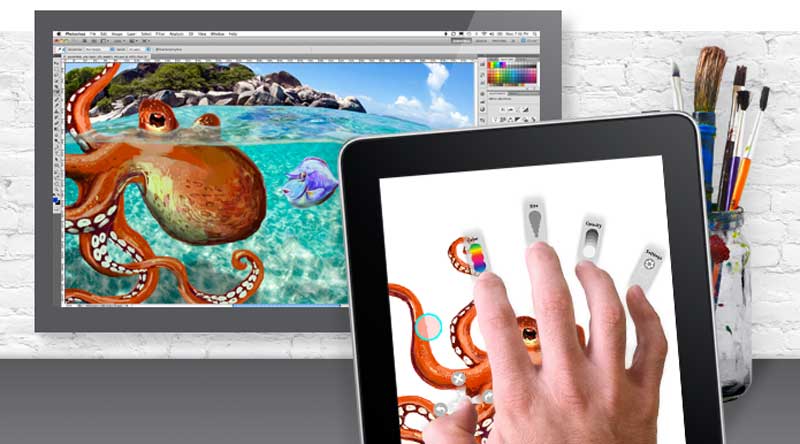 With the SDK, Adobe is inviting developers worldwide to create mobile and tablet applications that interact with Photoshop, uniting the fun and interactive experience of touch devices with the power and precision of Photoshop.

The Photoshop Touch SDK and a new scripting engine in Photoshop open the door for Android, BlackBerry Tablet OS and iOS apps to drive and interact with Photoshop on the desktop:

All three applications take advantage of the iPad tablet’s touch screen for a immersive, tactile, on-the-go experience. While the first applications available are for the Apple iPad and the iOS, the Photoshop Touch SDK makes development possible on other devices, including Android and BlackBerry PlayBook. Adobe has already engaged with a number of developers across the industry to incorporate tablets and other devices into creative workflows that empower Photoshop users in new and groundbreaking ways.

“Our research shows that creatives are adopting tablets faster than any other group and we heard loud and clear that they want to use their devices to interact with Photoshop, the tool they depend on most of all,” said John Loiacono, senior vice president and general manager, Digital Media Solutions, Adobe. “The apps that we announced today show some of the creative ways tablets can work with Photoshop and over the next few months Photoshop’s vibrant developer community is going to dazzle us with innovative apps that further integrate tablet devices into creative workflows.”

Developers can access the free Adobe Photoshop Touch SDK today for Windows and Mac OS platforms on the Adobe Application Manager. Current Photoshop CS5 customers can experience the value of the connection to devices by downloading and installing a free patch available on www.adobe.com or via the Adobe Application Manager, beginning early May, 2011.

The Adobe Color Lava, Adobe Eazel and Adobe Nav applications for Photoshop are also expected to be available in early May 2011, ranging in price, on the iTunes App Store.

For more information or to sign up to be notified when the apps become available for purchase, visit www.photoshop.com.