Apple CEO Steve Jobs has announced the next version of the iPad tablet, which will ship on 11 March in US and 25 March in the UK. At the event this evening in San Francisco, Jobs also announced Apple iOS 4.3 – the next iteration of Apple’s mobile operating system. Apple iPad 2 will cost from £429.

Jobs referred to the iPad 2 as having “a totally different design” which will be dramatically faster, with a dual-core A5 processor, up to two times faster than the previous iPad’s CPU. He said Apple had gone all out on graphics performance, with up to nine times faster graphics.

iPad 2 has the same battery life as the original iPad, according to Apple, and will run Apple iOS 4.3. Apple iOS 4.3 will be free download for all Apple iPad, iPhone and later iPod touch users, on 11 March.

Jobs described the iPad 2 – which will have front and rear cameras – as “the first dual core tablet to ship in volume.” It will also have a built-in gyroscope, and is dramatically thinner than the original iPad – and is thinner than the iPhone 4. With the two cameras on board, users can now enjoy video conferencing via the iPad 2 as well as the iPhone 4, using FaceTime.

“It’s in Apple’s DNA that technology alone is not enough,” said Jobs. “It’s technology married with liberal arts, married with the humanities, that yields us the result that makes our hearts sing.” 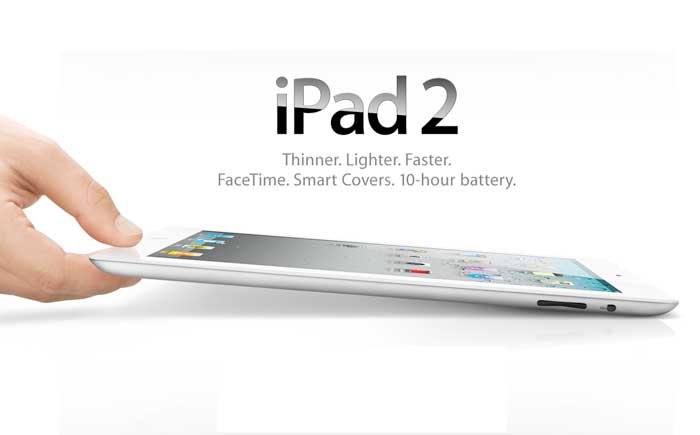 iMovie for iPad has a precision editor, multitrack audio recording, new themes, AirPlay, the ability to share your videos in HD with popular sites, and is universal, so it will also run on iPhone.

Garage Band for iPad offers touch instruments. It is compatible with the Mac version, and in this latest version allows you to strum your iPad like a guitar. It also offers guitar amps and effects, 8 track recording and mixing as well as 250+ loops, and you can e-mail AAC files of your songs.

At the event Jobs demonstrated an add-on HDMI-out accessory for iPad2, with which users can present up to 1080p content direct from their iPad 2. He also showed off a thin, see-through case that is flexible and held in place by magnets. The case is made of polyurethane.

Describing the Apple iPad at the event via a video message, Apple designer Jonathan Ive said: “I cannot think of a product that has defined a new category, and then redesigned in such a short time.”