The BAFTA winning Mill TV team has confirmed that it is onboard to create the visual effects for the new series of Primeval. 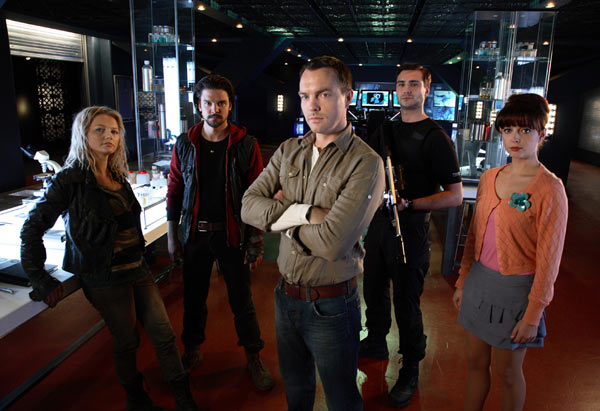 ITV’s action-packed hit drama  is roaring back on to UK television screens in early January 2011 with a host of new creatures from the past, present and future. Created by Tim Haines and Adrian Hodges, the new series will feature the welcome return of characters from previous series, including Abby (Hannah Spearritt), Connor (Andrew-Lee Potts) and Lester (Ben Miller) – a team of scientists who are on a mission to investigate the appearance of temporal anomalies across the UK, through which prehistoric and futuristic creatures enter the present.

Joining the old cast is Ciaran Mcmenamin, Alexander Siddig and Ruth Kearney. “We are delighted to be working with the team from Impossible Pictures to bring big screen VFX to the small screen,” said Will Cohen, Group Head Mill Film and TV.

“The team has created a fantastic array of creatures that will be sure to keep viewers gripped to their sofas,” said Tim Haines, Creative Director at Impossible Pictures. “Because we were shooting the new series in HD, we opted to work with The Mill because of their superb track record in this area. They have certainly taken VFX to a new level and have come up with some pretty amazing stuff.”

Primeval is an Impossible Pictures, BBC Worldwide and ProSieben co-production for ITV and UKTV. Produced by Impossible Pictures, with co-production partners BBC Worldwide, BBC America and Germany’s ProSieben, the premiere of the new series will be split between ITV1 and UKTV’s pay TV entertainment channel, Watch. ITV1 will be the first to broadcast series 4 (in early 2011), while Watch will premiere series 5 later that year. ITV1 will broadcast season 5 thereafter.

See more on Fired By Design by Mill TV