Cinesite, one of the world’s leading film visual effects houses, has completed visual effects for Harry Potter and the Deathly Hallows Part 1, including Lord Voldemort’s snake-like nose, the ghost of Dumbledore, and a Patronus doe. 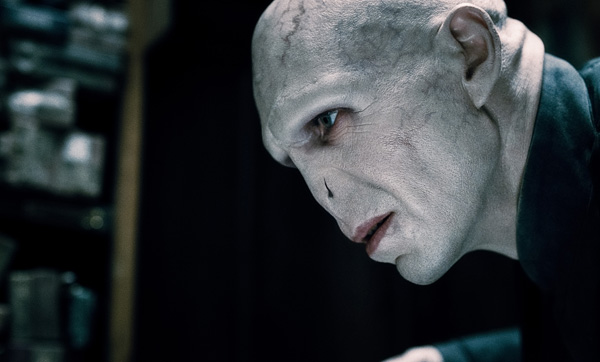 In replacing Ralph Fiennes’ nose area with Lord Voldemort’s CG snake-like snout – which extended from between the eyebrows to the upper lip – it was important to maintain the integrity of the actor’s performance throughout the 46 shots. To achieve a very precise matchmove of Fiennes’ vocal performance, Cinesite built a rig with three layers of animation controls. This enabled them to make full use of the 16 tracking markers attached to Fiennes’ head while still having the flexibility to animate the cheek, upper lip and nose areas as needed. They kept as many natural facial creases as possible while using CG skin textures to remove shadows of Fiennes’ nose.

“Having worked on all the previous Harry Potter films, we were excited to use our extensive experience in facial replacement work to bring to life one of the main characters of the film,” said Antony Hunt, managing director,Cinesite. “From close-ups where his face takes up half the screen to scenes hundreds of frames long with lots of movement and different lighting conditions, we’ve achieved a seamless, realistic look while maintaining the essence of Ralph Fiennes’ performance.”

For the shots featuring Dumbledore’s ghost, Cinesite used a clean plate of the corridor in which he appears and a green screen plate of Sir Michael Gambon. They generated a digi-double from texture stills and a cyberscan of the actor, and match-moved and projected Gambon’s green screen performance onto the model. The digi-double was also used to drive particle simulations and colourise the particles so that they could be blended seamlessly back onto the digi-double. Cinesite generated around 150 million individual particles as well as a model of the corridor in which the ghost appears to use for particle collisions.

The Patronus doe appears to Harry in the form of a light, which expands into a semi-formed creature. Cinesite generated a fully-rigged and groomed photo-real animated CG doe. Cinesite’s proprietary csFluidShader was used to achieve a volumetric effect and the artists rendered it with multiple layers of animated 3D textures. Nuke was used to generate texture maps, which were projected and manipulated to form the shape and look of the doe. The various layers were combined and blended to achieve an otherworldly feel.

Other effects completed by Cinesite include a CG wreath of Christmas roses conjured by Hermione at Harry’s parents’ grave; rebuilding the set for Godric’s Hollow in CG; as well as 2D and CG set extensions, full CG environments and CG snow. High dynamic range digital stills were re-projected as textures and geometry rebuilt where necessary to extend the partial back-lot sets where the actors had been shot. Cinesite’s csPhotoMesh was used to reconstruct terrain information from photographs of Malham Cove in Yorkshire for the Windswept Hill sequence.

See more about Cinesite on Fired By Design

See other stories about Harry Potter on Fired By Design