Apple goes ‘Back to the Mac’

Apple has introduced a new Macbook Air, updated its iLife suite of consumer-level creative tools and given a sneak peek of the next iteration of Mac OS X, codenamed Lion. 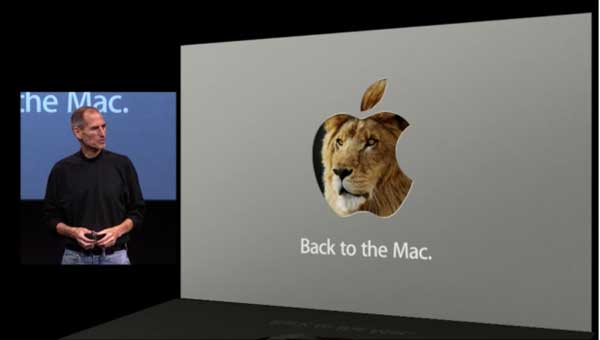 At a fairly intimate event at Apple HQ in California (at least compared to the usual tech company extravaganza), CEO Steve Jobs and members of the Apple executive and engineering teams presented the new products in a session titled ‘Back to the Mac’.

Streamed live on Safari (view it again here on Safari on a Mac or iOS device and enjoy the introductory Linus and Lucy theme) the session revealed, perhaps surprisingly, that although the iPhone and iPad make all the headlines, a third of Apple’s revenue last year came from the Mac.

According to Apple COO Tim Cook, that 33 percent represented $22billion, a new record for the company. Almost 14 million macs were sold last year, three times as many as in 2005. Cook added that there were now 50 million Macs worldwide with 600,000 registered Mac developers : including Valve, developer of Steam; Microsoft, which is launching a new version of Office for the Mac; and Autodesk, which recently announced AutoCad for the Mac. The latter product marks the latest big investment from Autodesk in the Mac, following the introduction of the visual effects tool Smoke last year.

The first product announcement concerned iLife’11 which includes new versions of iMovie, iPhoto and Garageband. Free with every new Mac, iLife ’11 is available immediately as a £45 (inc VAT) upgrade for existing users. Highlights in iPhoto ‘11 include new full-screen operation slideshow modes and templates, while more interoperability with third-party applications means that iPhoto can pull in photos from Facebook and Flickr accounts. 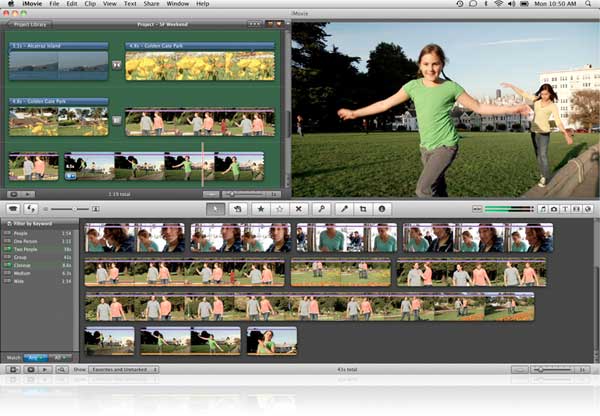 iMovie11 lets you quickly find the clips you need with People Finder.

Randy Ubillos, Chief Architect for Apple’s video applications demonstrated iMovie ‘11 which offers more advanced audio editing using colour coded audio waveforms as well as one-step effects application. iMovie also offers quick creation of trailers, which can be rapidly put together using face-detection driven ‘people finders’ that identify video segments that have one or multiple people in them. Ubillos quickly composed a trailer from a combination of set shot types- group shot, action shot, closeup shots and single person- and revealed that Apple had enlisted the skills of the London Symphony Orchestra to record soundtracks for iMovie at Abbey Road Studios in London. Trailers can be sent directly to Facebook and Vimeo in addition to existing iMovie options. 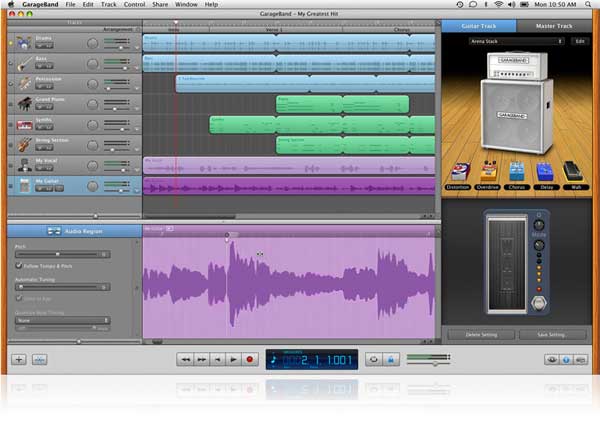 GarageBand ‘11 offers a host of enhancements, including new guitar amps and effects, new playalong lessons based on HD movie clips,  FlexTime to adjust chord length and edit waveforms and most impressive of all, Groove Matching which can automatically match multiple tracks to one instrument, for example the drums. Demoing the application, product marketing manager Xander Soren described it as an automatic spell checker for bad rhythm.

Jobs also announced that FaceTime, the video app for the iPhone and iPod Touch introduced in June, would be available for the Mac OS. FaceTime will pull contacts from the Mac OS X Address Book and is full-screen capable. FaceTime for Mac will auto-rotate the video feed based on orientation coming from iPhone/iPod touch devices and is available today as a beta release.

A look at Lion

Jobs followed FaceTime with  ‘the entrée for today’ – revealing some of the features in the next version of Mac OS X, codenamed Lion. Due out in the summer of 2011, Lion will take more advantage of the Apple devices and trackpads that offer gesture-driven control of applications. 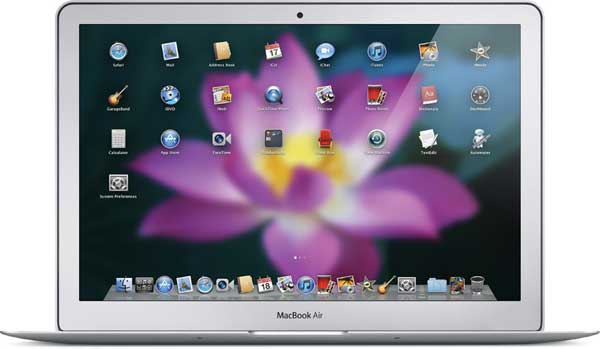 The Launchpad gives you instant access to your apps — iPad style 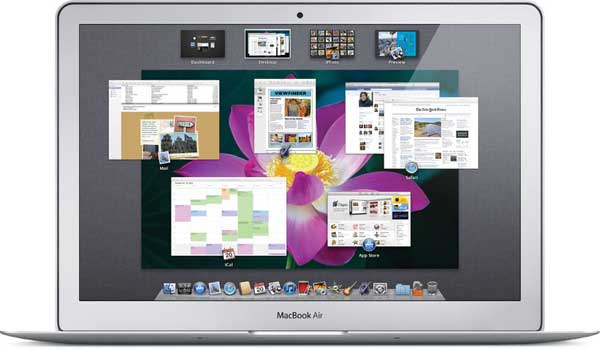 Mission Control gives a bird’s-eye view of everything — including Exposé, Spaces, Dashboard, and full-screen apps— all in one place.

Full-screen display of apps, as seen on the iPad, will be a standard feature, allowing users to bring an app to full screen with one click, switch to another full-screen app with a swipe of the trackpad and swipe back to the desktop to access multi-window apps. Launch Pad will be a new way to access and launch all applications on the Mac.  One swipe with a gesture-capable device will display multiple pages of apps, and you can arrange apps any way you like by dragging an app icon to a new location or by grouping apps in folders. Utilities in Snow Leopard such as Exposé, Dashboard, Spaces are unified in Mission Control, which offers an innovative new view of everything running on your Mac, allowing you to instantly navigate anywhere. 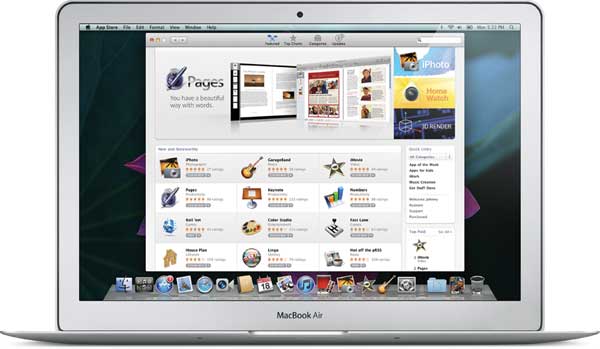 The Mac App Store is just like the App Store for iPhone, iPod touch, and iPad

Lion will also feature the Mac OS App Store, which follows a similar model to the online resource for iPhone/iPad users and will provide one-step installation of Apps and automatic updates.  However, Jobs added that this feature would be brought forward and would be open within 90 days. 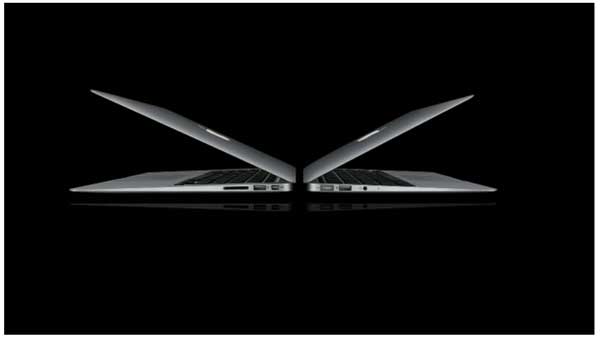 It’s now traditional for Jobs to announce ‘one more thing’ at launches like this and time it was a revamped MacBook Air.  Two new models were announced, deriving a lot of features and engineering from Apple’s experience with the iPad, including solid-state flash storage to deliver instant-on responsiveness, up to seven hours of battery life, and up to 30 days of standby time.  The new MacBook Air models are available in 11-inch and 13-inch models and weigh from 2.3 pounds, making them Apple’s lightest notebooks ever. Starting at £849, the MacBook Air is available now on the Apple Store and at Apple Retail Stores.

“MacBook Air is the first of a new generation of notebooks that leaves behind mechanical rotating storage in favour of solid state flash storage”, said Jobs. “We’ve taken what we have learned with the iPad — solid state storage, instant-on, amazing battery standby time, miniaturisation and lightweight construction, to create the new MacBook Air. With its amazing responsiveness and mobility, it will change the way we think about notebooks”.

With its precision aluminium unibody enclosure, the new MacBook Air measures an incredibly thin 0.11-inches at its thinnest point and 0.68-inches at its thickest. It weighs 2.3 pounds for the 11-inch model and 2.9 pounds for the 13-inch. Like iPad, MacBook Air was designed from the ground up to use flash storage exclusively. Apple’s custom-designed flash storage is 90 per cent smaller and lighter than a conventional notebook hard drive, contributing to MacBook Air’s mobile, featherweight design. Apple claims hat MacBook Air’s flash storage also provides faster data access and is more reliable than notebook hard drives due to its solid state design. 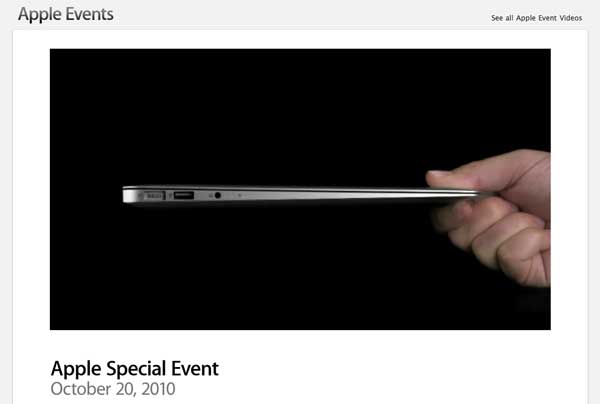