Square Zero created an ambitious series of live holograms earlier this week to form the centrepiece of Randstad Holding’s 50th anniversary celebrations. The company, the world’s second largest recruitment organisation, hosted a series of parties in 26 cities across 19 countries celebrating a half century since its inception in 1960 and marking one of the largest holographic productions ever created. 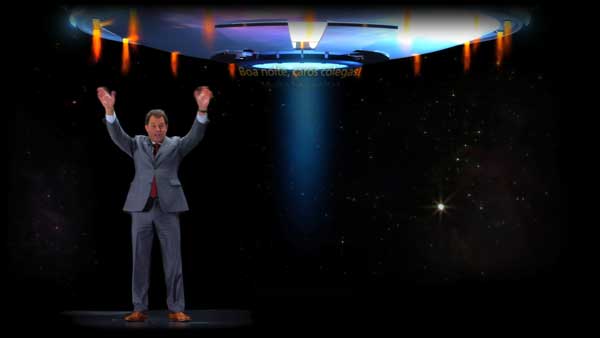 The hologram of Randstad CEO Ben Noteboom introducing the presentation

Using its live hologram expertise, Square Zero was able to re-create Randstad CEO Ben Noteboom in 26 unique scenarios, one for each city, in which he addressed the company’s employees both by location and in their local language.

Square Zero used cutting edge technology and Musion Systems projection to create the holograms and 3D animated content in a presentation that Vicky Godfrey, Director and Partner, Square Zero, described as one of the studio’s most ambitious projects to date. “Each hologram has been individually tailored to a different time zone and location through unique sequencing and a variety of takes, making each a genuinely distinctive experience,” she said. “It is projects like this that have allowed Square Zero to establish a reputation as a top producer of holographic content and one of the most innovative production companies around.” 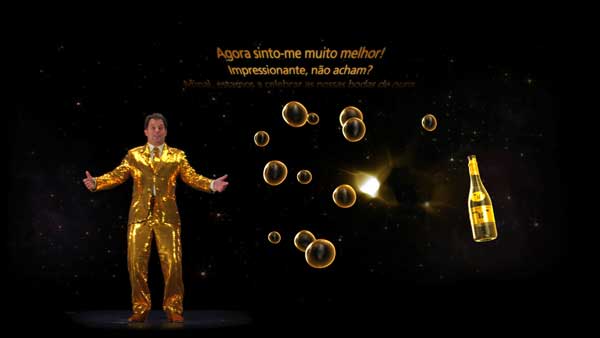 The project’s director was Najma Bhatti, an award-winning director at SquareZero whose previous projects at the company include the acclaimed ’Nothing is Impossible’ hologram.

Bhatti said the first challenge the team encountered was at the design stage. ”The content would be going out on different size platforms depending on the venues,” she said.  ”The design had to be created in a way that, in the main venues that had bigger setups, the space would be used to maximum effect. And in the smaller venues, it was important to retain the same sense of celebration while keeping the content quite contained.” 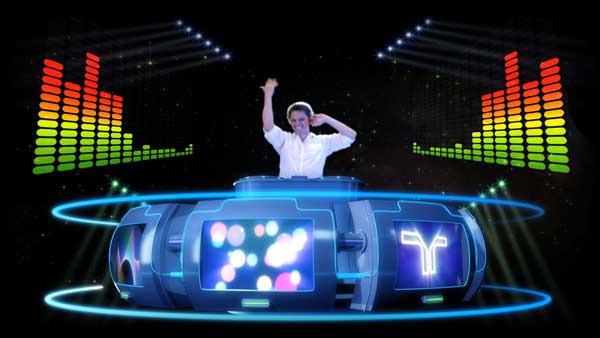 Each piece had to have a bespoke introduction to directly welcome the audience to the party in their location. The CEO had to be filmed welcoming the audience in each of the 26 venues. “Unfortunately, due to busy schedules, the CEO was only available for a one day shoot very late into the project,” said Bhatti.  “This meant that most of the animation had to be set up and ready at that stage, with just gaps left, in which to drop in the CEO footage.”

Another complication was that the CEO spoke in four different languages within the 26 versions. “Naturally the timings of the animations changed from version to version,” explained Bhatti. “In addition, the piece was also subtitled in nine different languages.”

“We made a decision quite early on that the way to go would be to create quite simple but beautifully finished animations which could easily be taken out of versions if shortening was required, and looped if necessary to extend out the times.” 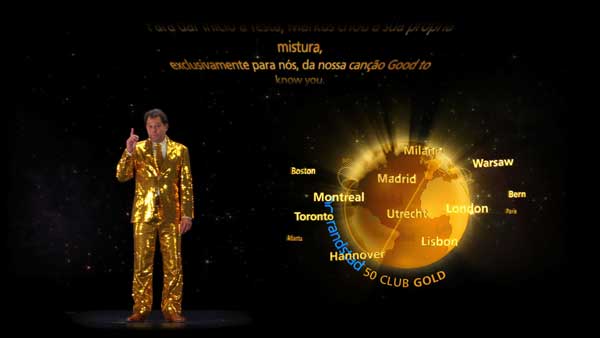 “The pure logistics of the project and keeping track of it all was quite a job in itself,” Bhatti explained. “And of course dealing with so much HD footage at once was not a quick process. Four of the main venues had bigger foil setups and used double projectors – so for these two HD images had to be rendered out to sit together perfectly.”

“The whole process was mapped out and carried out like a mini military operation, with checklists of sizes, languages and diagrams for each setup,” Bhatti continued. “Even the rollouts of the file deliveries and the order were carefully constructed exercises without which the project wouldn’t have worked. The different locations also had different playout systems so required the files in particular ways.”

“While we are used to working to a high level of detail, tight deadlines and on quite demanding jobs, this was quite unprecedented in terms of the scale and levels of complexity that were involved. The result was a hugely successful global party and very happy clients.”

See more by Square Zero on Fired By Design