e-on software has announced the immediate availability of a free Open Beta of Carbon Scatter, the company’s instancing plugin for the mental ray and V-Ray renderers for 3DS Max.

Carbon Scatter integrates e-on’s patented EcoSystem algorithms directly inside the end user’s favorite 3D application, allowing the population of native scenes with millions of instances and rendering them with the user’s renderer of choice.

Some of the features of Carbon Scatter include:

Automated Smart Scattering: Carbon Scatter does not merely scatter the objects randomly across the underlying surface, but actually computes where to place them according to the relief of the underlying geometry. For example, as in nature, more trees will grow on flat terrains than on steep slopes, and no objects will be placed where they are likely to “fall down”.

Paint Objects and Plants with the EcoPainter: The EcoSystem painter tool (EcoPainter) lets the user interactively paint instances over any surface (or group of surfaces). Painted instances can be attached to the underlying surface so they move together with the surface, or they can be independent. Painting can be performed with a mouse or with a tablet, which gives you the ability to control additional parameters through pressure.

Advanced EcoSystem Control: Multiple plants can be dragged from the plant browser into the EcoSystem population list, making the preparation of complex EcoSystems much quicker. When painting EcoSystems, users can paint with the underlying EcoSystem material rules applied, so that, for instance, the influence of slope and altitude or the sizing rules are taken into account.

Powerful Layered EcoSystem Materials: EcoSystems behave just like regular materials. A single EcoSystem material can have any number of layers, each layer with its own population list and full set of controls. Users can easily influence EcoSystem populations according to altitude, slope or orientation, or even take advantage of Carbon Scatter’s powerful function graph to control almost every aspect of the population. For example, artists can use a fractal noise generator to control the distribution instances, or use a bitmap to limit distribution to specific areas. On top of this, the population density can also depend on time.

A complete and detailed list of features will be made available closer to the final release.

Immediately available, the Carbon Scatter Open Beta is a free, fully functional version of Carbon Scatter for the mental ray and V-Ray renderers for 3ds Max 2009, 2010 and 2011.

The application will expire shortly after the beta period. Commercial work is allowed with the Open Beta, provided that users purchase a full license of the product as soon as it is released commercially.

e-on software is encouraging users to submit  the images they create with Carbon Scatter. If an image is used in e-on software’s communication, the author will automatically win a copy of the final product when it is released.

The Carbon Scatter Open Beta is available in English for Windows XP, Vista and Windows 7 (32 and 64 bits). 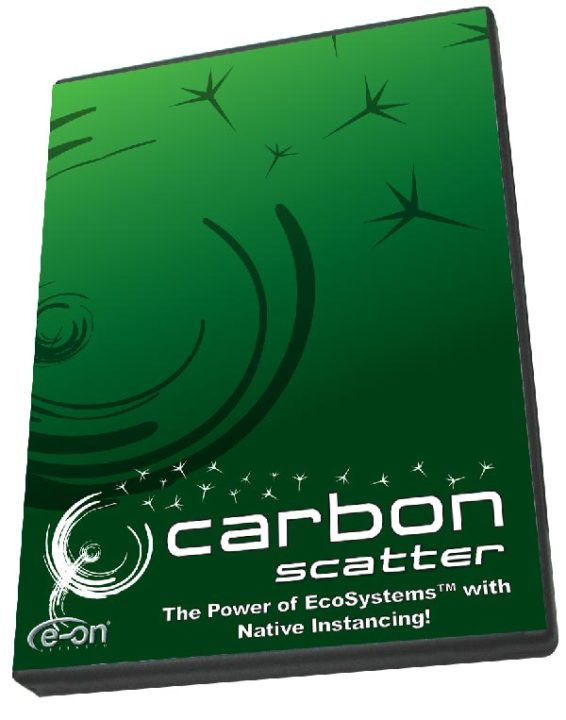