Rushes MGFX Studio was tasked with creating animated map graphics for “Giuliani’s 9/11” – a film by Dangerous Films about the  terrorist attacks on September 11th, 2001. 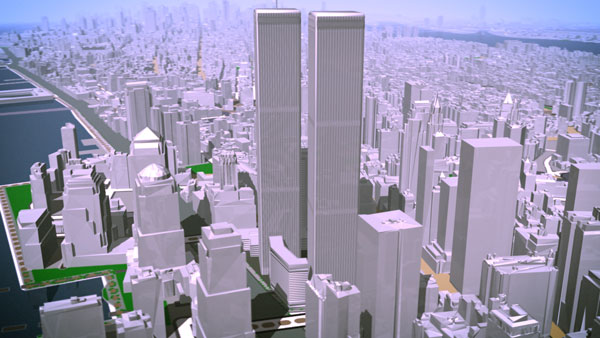 “Giuliani’s 9/11” takes us behind the headlines and into the former New York City mayor’s world during the tragic events on that day. In a series of candid and often moving interviews, Mr. Giuliani gives a personal account of the events of 9/11 – from the moment he was informed that a “twin-engine plane” had crashed into the World Trade Center, to his decision to go directly to Lower Manhattan to assess the situation, to the inconceivable collapse of the South Tower, and then the North Tower, and finally to his news conference that afternoon that helped steel a shaken city and nation.

Matt Lawrence was responsible for 3D graphics on the production: “We needed to illustrate Giuliani’s position when the first plane hit the north tower, which was all the more challenging given the distance he was from the WTC complex at that time,” he explained “The Peninsula Hotel where he was having breakfast is further away than the Empire State Building which required the modelling and texturing of almost the entire city.” 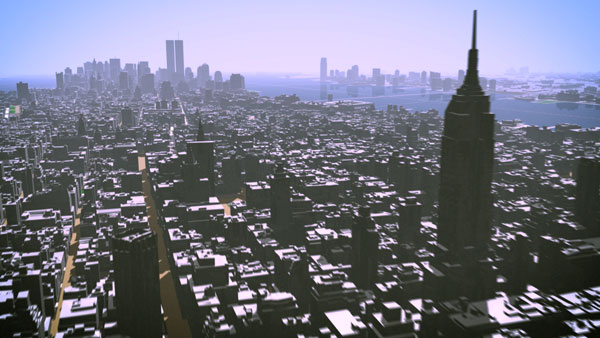 “This in itself was very challenging not only due to the size of the 3D build but also due to the limited time we had to get the job rendered for delivery,” continued Lawrewnce. “Because of these constraints we needed to be creative with the look and thus chose to render the city in a graphical manner. Director Richard Dale wanted to move away from the more traditional looking map, so we designed off white reflective surfaces enhanced with atmosphere and a strong light source to complete the stylised look.”

Further elements were added as highlights to key locations such as bridges, outposts and the subway system, all of which were affected by the atrocities carried out on that day.

The 3D was a combination of hero WTC buildings modelled by Andy Hargreaves in Maya and the rest was created in Cinema 4D by Matt Lawrence. Final compositing was completed in After Effects. 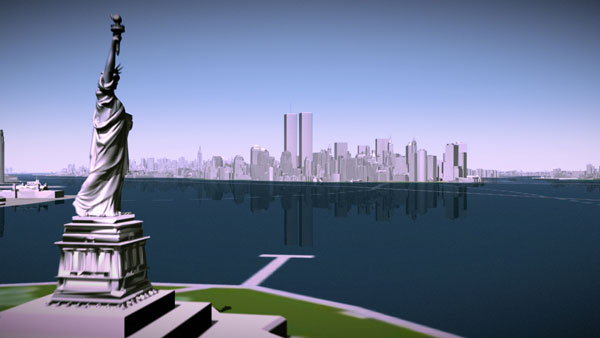 My deepest condolences go to the families of the victims, especially on the anniversary tomorrow.