The Matchlight Documentary Internship Programme will equip a new generation of Scottish based producer/directors with the skills they need to win network television commissions.

Interns will receive ongoing training and support from Matchlight to help launch their careers as documentary film-makers. Jacqui Hayden, Matchlight’s Head of Development, and Ross Wilson, the company’s International Emmy and BAFTA Award-winning Creative Director, will act as mentors for the interns throughout their 12-week placement. DCD Media’s rights divisions (DCD Rights and DCD Publishing) will advise internees regarding the complex but increasingly important international television markets. 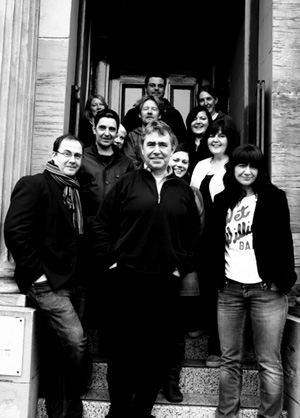 The Matchlight team outside their Glasgow offices

The Matchlight Documentary Internship Programme has grown from the success the company recently enjoyed in securing a first hour long network commission for Glasgow film-maker Anne-Claire Pilley. Matchlight engaged Anne-Claire to work within the company’s development team in the Autumn of 2009. Working with the support of Jacqui Hayden she devised and developed a documentary entitled “My Soldier’s Story” for BBC Three which she is currently filming.

“Thanks to the help and support of Matchlight I secured a commission to produce and direct my first hour long network documentary, My Soldier,” said Pilley. “Throughout both the development and production of this film, Matchlight have been incredibly understanding and supportive. They are a fabulous team of experienced film makers and industry professionals who clearly remain firmly committed to encouraging a new generation of film-makers in Scotland.”