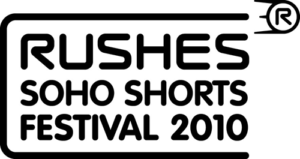 Rushes Soho Shorts has announced the Official Selection for the 2010 Festival.

The non-profit event is acclaimed, nationally and internationally, as being a major platform for the short film genre, with an equal focus on emerging and established talent.

170 short films from 23 countries have been selected for competition. Production budgets range from £50 to $2.5million from a wide range of both newcomers and rising talent to long established professionals, from individuals to large multi-national studios.

For 2010, the audience will be able to vote for their favourite film at the Official Screenings. These will be joined by a further 55 screenings of guest curated work and 40 events which will be held throughout the 10 day period, 90% of which will be free for people to attend.

Full screenings and event details along with information on how to reserve tickets and seats will be available online from Wednesday 30th June 2010.

The full list of films in competition, along with the directors and companies that made the work, can now be seen be seen at the dedicated Soho Shorts site www.sohoshorts.com