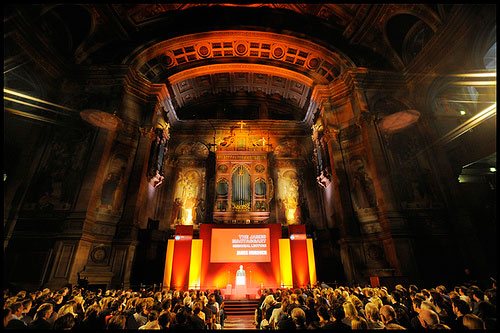 BBC Director General Mark Thompson’s MacTaggart will set the agenda for the weekend in what promises to be a pivotal year for the BBC. The festival weekend will feature sessions examining what the new government will mean for media, and what role television had to play in the most unpredictable election in recent memory.

Abbott commented: “I’m thrilled to be giving the Alternative McTaggart Lecture because I believe it’s an exciting time to comment on the British TV industry’s reaction to, and performance since, the credit crunch.”

Tabloid star Katie Price will also be revealing what makes her tick in a live interview on Sunday.

A typical MGEITF event from a previous year

The BBC has already laid out plans for major changes, but will more savage cuts be coming their way?  What should they cut, and what deserves protecting?  The Festival audience will decide in a session entitled Build Your Own BBC, chaired by Jeremy Vine. There will also be a special, Edinburgh edition of Question Time which will feature those new to power, and in opposition.

MGEITF’s opening session will embrace the dance fever that is sweeping the nation by staging a festival version of the Sky 1 HD show, Got To Dance. Six teams — from one solo tap dancer to a 15-strong dance crew — from channels and leading independent producers will perform an array of dances from hip hop to jazz and ballet to street. Each performance will be critiqued by the judges Ashley Banjo, Kimberley Wyatt and Adam Garcia who will award those iconic red and gold stars – with the winner decided by a live audience vote.

In a landmark year for British soaps, MGEITF is celebrating 50 years of Coronation Street and 25 years of EastEnders. For Coronation Street – festival goers will be taken on a trip down memory lane. Masterclass line-up includes writer and creator Tony Warren, actress Kate Kelly and journalist Nancy Banks-Smith. Producers will reveal how potent plots and sizzling storylines continue to excite and engage audiences young and old. Discover the secrets of writing, producing and directing and learn how EastEnders skillfully tackles social taboos time and time again, helping to create defining moments of television. And find out how this year, the production pushed the boundaries even further ‘simply’ by keeping a secret, and producing its first ever live episode, watched by 17 million people.

Millions watched the debates and the election night shows live on TV whilst tweeting and following online – it brought social media out of teenage bedrooms and into the living room. MGEITF will reveal how broadcasters and producers can harness the social power of Twitter and Facebook to drive deeper engagement and build bigger audiences in a session chaired by prolific tweeter @richardpbacon.

There will also be the unique chance to grill some of Fleet Street’s most prolific TV pundits including Ally Ross and Ian Hyland in a Meet The Critics session chaired by Endemol’s Tim Hincks. 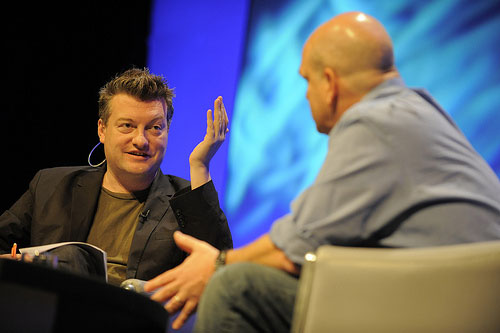 The Channel of the Year Awards will be jointly selected by the Festival’s Executive Committee and a live vote during the ceremony, hosted by top funny man Jack Whitehall on Saturday, August 28 at The Festival in Edinburgh.

Bringing a bit of light comic relief to the closing session of the festival is The Last Laugh – a talent search for the funniest person in the TV industry. MGEITF will pair up some of the biggest names from behind the camera and some of the funniest people behind the scenes, with the nation’s top comics. Which top execs will join Jon Snow in trying their hand at stand up? Comedians who have agreed to mentor TV industry talent include Shappi Khorshandi, Russell Kane, Sarah Millican, Mark Watson, Steve Amos, Pete Johanssen and Kevin Bridges.

Deborah Turness, 2010 MGEITF Advisory Chair and Editor of ITV News, said:  “In keeping with our times this year’s Festival will be a coalition of agenda-setting content that will shape the direction of the industry and inspirational, creative stimulation.  With the Conservative/Murdoch Alliance now in Number 10, Mark Thompson’s MacTaggart could not be more timely. The big question: will David Cameron demand “savage” cuts at the BBC, and is radical change coming our way?  While the festival is about addressing key industry issues, it is also about celebrating and learning from our top creative talent and we are delighted that Paul Abbott has agreed to deliver the Alternative MacTaggart Lecture.”

Tim Hincks, MGEITF Executive Chair and CEO of Endemol UK, added: “When it comes to media events in 2010 Edinburgh is convincingly first past the post yet again. The best producers, celebrities, channel controllers and broadcasters will all be there, making it absolutely unmissable. Miss once, regret for an eternity.”