Web Designer Magazine’s Hot 100 for 2010, written and researched by yours truly, is on the shelves. As editor Mark Billen says in his intro, if it’s not on the list, it’s not worth worrying about!   More about Issue 166 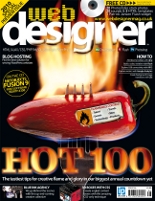 Many thanks to everyone who helped with the research.