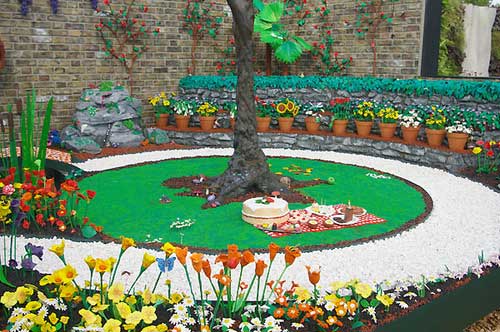 The BBC Two television series follows James May, the award-winning Top Gear presenter, as he sets out to prove why traditional, old fashioned toys are still relevant today when he pushes them to the limit in spectacular, supersized challenges. During the series, James May makes a full-size Spitfire out of Airfix; creates a plasticine garden (pictured above); races two scalextric cars around the old Brooklands race track; links two towns with the world’s longest model train set; builds a life-size bridge out of Meccano and builds a full-size house out of Lego.

A postproduction workflow combining SGO’s Mistika and Avid’s Media Composer was used to prep each episode for grade and mastering. Mistika’s capability of natively working with Avid media in real time, allowed for online and grade to be completed without the need to return to tape until master creation. A film look was then applied using the Snell & Wilcox Alchemist.

“With some grading systems the big issue is render time at the end of the session which can make you think twice before applying too many treatments like shading and vignettes,” explains Ross Copeland “Mistika works in realtime with no rendering so you can apply as many free vector secondary grades, windows, tracked shapes, keyframed animated grades, rescales and so forth, as you want to, and it will just play out.”

Copeland says he also put Mistika to good use in the Scalextric episode to help focus the attention on the cars on the track and to fix some issues inherent with that type of location filming. “Being resolution-independent, Mistika can play files of any resolution,” continues Copeland. “The Hornby episode had some animating map graphics that were supplied at over four thousand line resolution. I needed to add a zoom in and out of these graphics as they animated and Mistika’s re-interpolation function worked nicely for that. Mistika has definitely provided the ability to create a more polished result.”