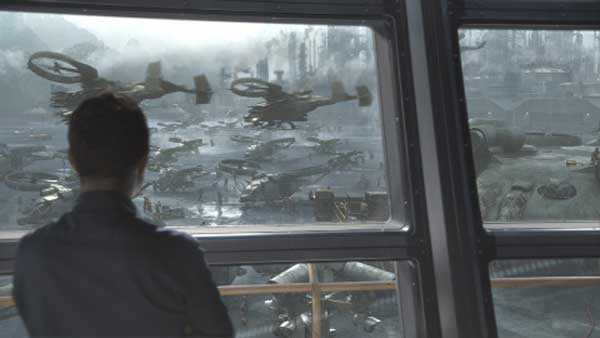 One recent estimate by the production was of 100 hours of computer time to animate each frame, though this may be conservative. At the scene complexity level, one shot in Avatar was the equivalent (in man hours and computing power) to entire sequences for other films.

“Because it’s essentially all CG, we had to split each shot up into many more layers than usual,” explained Ben White. “On average every shot had at least 10 layers (some had more than 40), each layer has multiple passes and every pass has different render elements.”

To help address the increased rendering challenges posed by the stereoscopic process (essentially doubling an already intensive demand), Framestore rolled out its next generation of in-house rib generator and rendering core technology. In addition, Cameron’s new 3D camera technology threw up its own little wrinkles, such as the occasional inversion of the camera when it needed to be close to the ground, which in turn reversed the left eye/right eye data it was recording. These and other issues all had to be addressed and accommodated.

After what turned out to be one of the more gruelling projects for Framestore in recent memory, team members are now able to look back with real pride on what they’ve achieved. Whilst cooperation between the three main facilities was essential, a friendly rivalry certainly helped to ginger up the various teams as they raced to create the benchmarks that Cameron wanted. Asked now about their favourite part of the whole process, many in the Framestore team will cite as a source of particular pleasure the occasion on which the lighting on the AMP suit in the Armor Bay sequence was held up by Cameron as the look towards which other facilities should be striving.  Tim Keene takes a different view. Asked what he’d point to as the best thing about the project, he said simply, “We did it. We jumped off a cliff and into the biggest VFX project ever undertaken, taking on a completely new technology as well as the most demanding use of existing kit, and we emerged – a little bruised, perhaps, but a lot wiser and with a great set of sequences to show for it.” 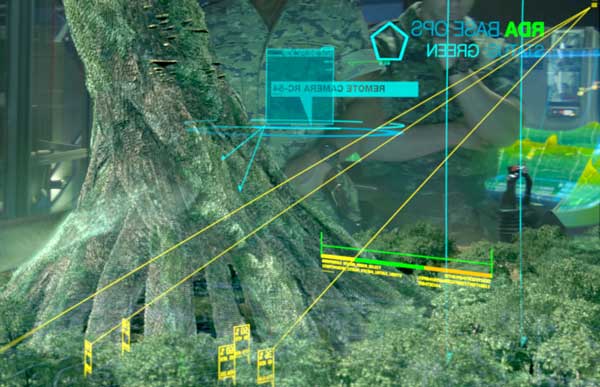 Detail of the Home Tree scene, which takes place on the Op Center’s Holotable in Avatar, with VFX by Prime Focus

Prime Focus contributed numerous stereographic and ‘Holotable’ displays, animated graphics, immersive environments and other visual effects to Avatar. It’s also notable for the first major use of the company’s View-D technology, detailed in this exclusive interview on Fired By Design.

The bulk of Prime Focus’ work was done for the film’s Bio lab and Ops Center, the bustling hub for military operations and one of the key environments in the film.  A team of approximately 90 was spread across Prime Focus’ Los Angeles, Vancouver and Winnipeg facilities, with President & Senior Visual Effects Supervisor Chris Bond and Visual Effects Producer Chris Del Conte driving the project out of the LA office. Graphics Supervisor Neil Huxley art directed and oversaw the design of the motion graphics elements.

“Our experience working with stereoscopic 3D material, both on the movie ‘Journey to the Center of the Earth 3D’ and through our proprietary View-D technology, more than prepared us for ‘Avatar,’” said Bond. “Having the resources of our talented teams across Winnipeg and Vancouver at our disposal and set up for remote collaboration with our Los Angeles crew also meant we could ramp up at a moment’s notice when we were awarded additional shots.” 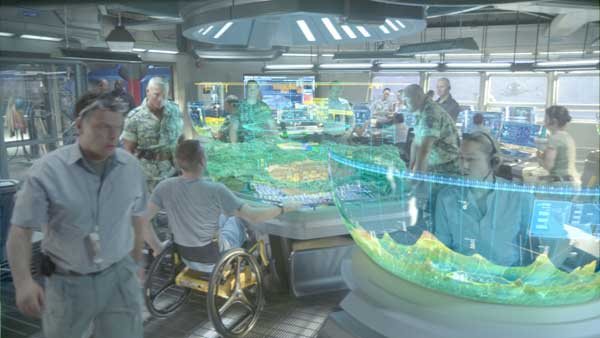 Prime focus created numerous stereographic and “Holotable” displays, animated graphics, immersive environments and other visual effects for the movie. A majority of the team’s efforts were spent on the film’s Bio lab and Ops Center, including a three-dimensional hologram of the “Home Tree,” where the Navi live.

Prime Focus designed displays for the Op Center’s Holotable over which the film’s main characters discuss their missions and plans to mine a valuable mineral found on the planet Pandora. In one key scene, the film’s protagonist Jake Sully (Sam Worthington) and Col. Quaritch (Stephen Lang) bring up a three-dimensional hologram of the Home Tree, where the Navi, Pandora’s indigenous population, live.