Tern has just celebrated a BAFTA Scotland win for its KNTV Sex series, while its online Slabovia.tv venture has borne 8-bit fruit with GUTS, the first iPhone app game from a UK TV company 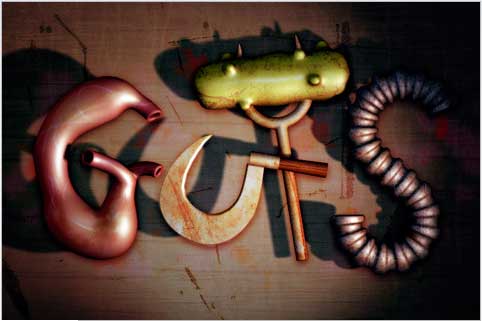 Winning the award for Children’s Programme, KNTV Sex is an alternative sex education and relationship guide. A mix of film and CGI animation, it features Kierkegaard and Nietzsche (K&N), two teenagers from the fictional country of Slabovia, ‘the last remaining communist state in Europe’.

Leader of the People’s Republic of Slabovia, General Smerdeyakov, has a problem. The birth rate in Slabovia has dropped substantially and the population of this once proud nation is decreasing at an alarming rate. In a nutshell not enough people are having sex. This does not fit in with the General’s plans for global domination, as he needs a young and vibrant population to carry forward his message to the rest of the world. In an attempt to solve this crisis, the General instructs K&N to produce a definitive ten-part sex education TV show. 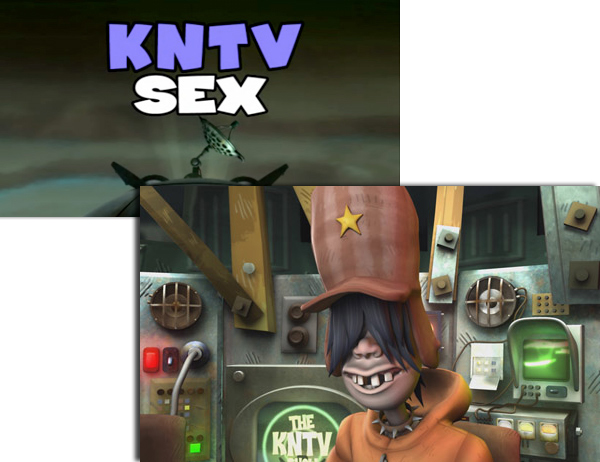 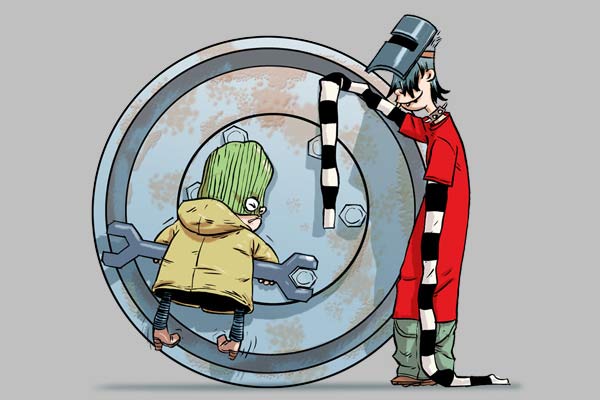 Awarded the 2009 award for BAFTA Scotland Best Children’s TV, KNTV Sex previously won the 2009 Royal Television Society Education award in the 11-16 age group. The RTS described the show as “a witty and uncompromising look at a subject of great relevance to its target audience….it uses first-class entertainment devices and characters to deliver tough content. An engaging and fun watch with real take-home for the viewer.” 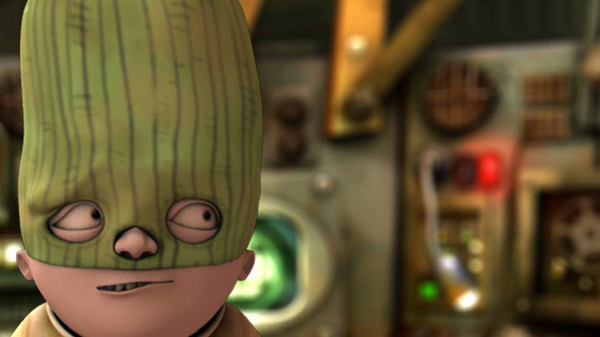 The KNTV concept has also made the move to the interactive domain. Backed by Channel 4, Slabovia.tv is an online environment that has three TV channels (animation, comedy archive clips and user generated conent) and a weekly digital newspaper, The Potato, which together form a role-playing environment where registered users (Slabovians) are ordered to pastiche Western culture and colonise social networks such as MySpace, Bebo and Flickr. 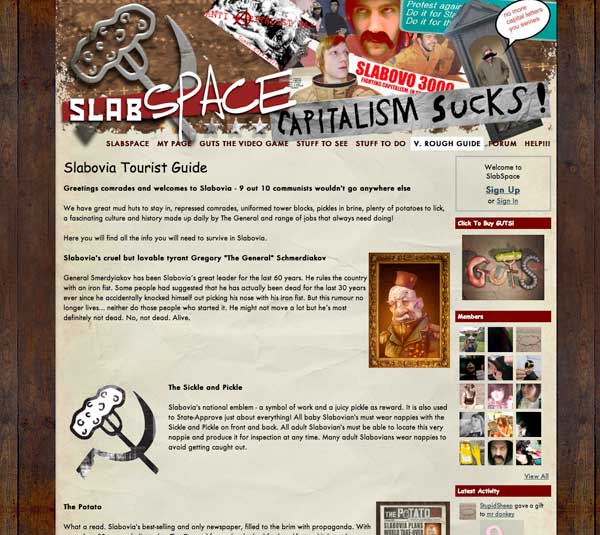 “There are a few projects going on in Tern Digital, but Slabovia is huge,” says Tern creative director and co-owner Harry Bell. “We think it’s probably the biggest online project of its sort in the UK at the moment.” According to Bell, slabovia.tv is worth nearly £2m, and the project encompasses 30 to 40 people across Tern, Super Umami and elsewhere. All of which, Bell says, creates a training bed for people who can work on future hybrid projects.

“In short, Slabovia is about roleplaying, identity and comedy entertainment,” explains Tern’s digital & multiplatform producer, Simon Meek. “It’s like having an improv theatre group reacting to, and co-existing in, a virtual world. There’s a sliding scale of educational content underpinning everything we’re doing, so it’s all part of that mix.” 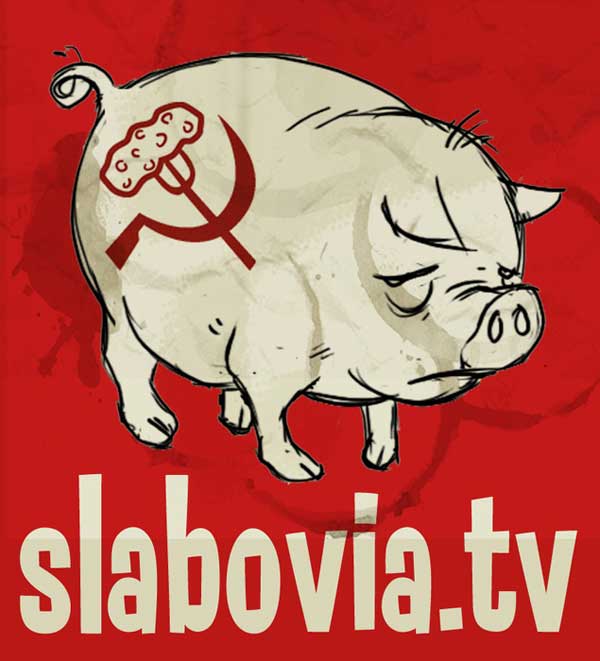 “Users can become citizens of the site, whereby they get a new Slabovian identity and career path,” continues Meek. “Slabovia is in many ways a parallel world, running in real time to the one we’re all in. So if something’s going on here, there will be a version of that in Slabovia. On the whole it’s satire of the west through the eyes of our cartoon communist dictatorship in the eastern bloc: when the iron curtain fell, Slabovia was under it. All citizens get access to the Big N Brown Book [BNBB], which gives you the tools and instructions needed to be a loyal Slabovian citizen. There’s also an interactive calendar and citizen activity area all geared around promoting and tracking roleplaying actions across the web. We’re tapping into and building on existing platforms for social networking and sharing content.”

Meek says the SlabPlayer is the destination where slabovia.tv users get to view Slabovia’s TV content. “If The Potato, our twice-weekly online paper, and the BNBB and Calendar is the Ying of the site, the SlabPlayer is the Yang,” says Meek. “This in itself is a strong proposition for those users who come to the site just for entertainment and don’t want to get involved directly in the citizenship tasks, though I’m sure they’ll be looking in and seeing how the active citizens are doing. Much of the content is satire…Who Wants to Win A Potato, That Was Their Life, News2.4….” 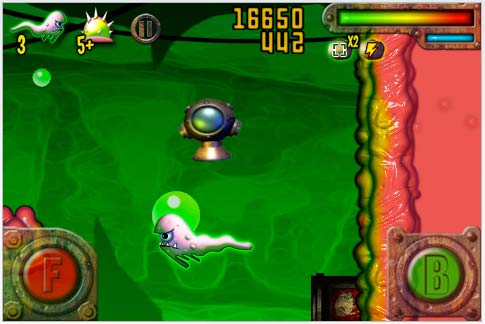 Developing the concept further is GUTS, a twisted game available as an iPhone app. The storyline again centres around the two Slabovian teenagers, who are shrunk down to a microscopic size and told to fix The General from the inside out. The 8-bit inspired retro action game features 11 levels, 20 monsters and Facebook Connect technology.

“The game levels are gory, yucky and funny, but they are also subliminally educational,” says Harry Bell. “KNTV started as Channel 4’s version of Brainiac – so we pitched it as Jackass meets Gorillaz with brains.  Eventually you make it to the guts and eventually after tackling various STD’s in the bowels, you’re ejected through the ass – muddy bloody and victorious.” 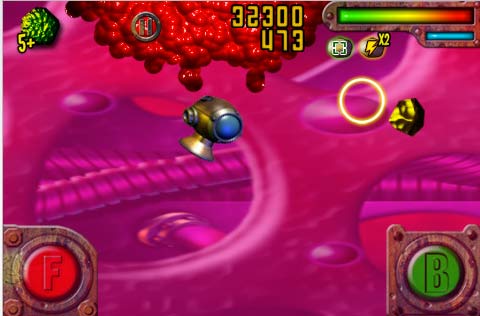 A screengrab of GUTS, where you explore the body of a dictator

“As a TV company we’re one of the first to get into iPhone app games, certainly in the UK, and this is testing that market,” Bell added.

GUTS was co-developed by Dundee-based Tag Games and features artwork by Garry Marshall of Super Umami, as well as an exclusive 8-bit soundtrack by Si Begg. 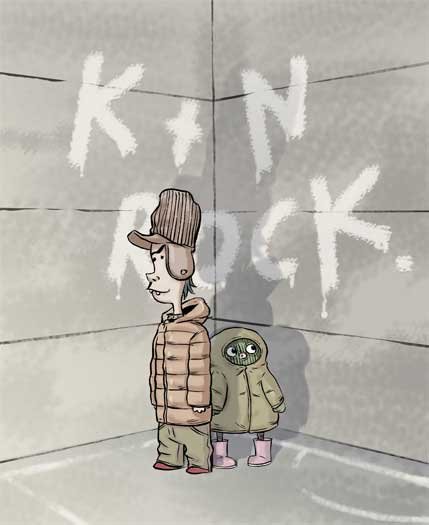 GUTS is on iTunes now

Experience the harsh reality of Slabovia