SpeakeasyFX has created the first 3D animated series to be part of the Sesame Street television programme. 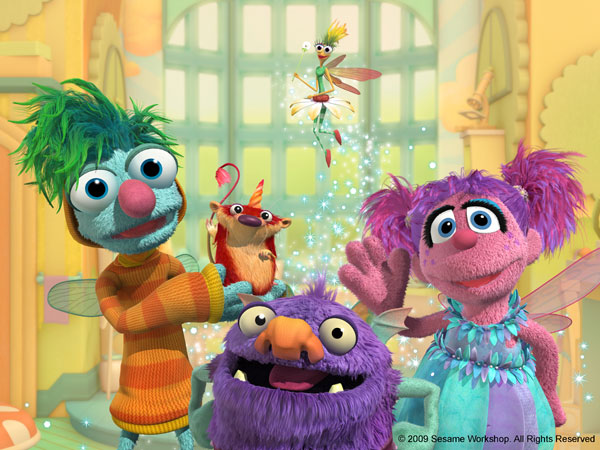 SpeakeasyFX, an animation studio in New Jersey, USA, worked on thirteen 9-minute segments of Abby’s Flying Fairy School. The programme’s 40th anniversary season debuted earlier this week, including computer-generated segments delivered by and made with Softimage. These fully CG segments were created to foster preschoolers’ critical thinking and problem solving skills. The series features a digital version of the favourite Muppet fairy-in-training, Abby Cadabby who, along with an eclectic gang of new friends, attends Fairy School with Mrs Sparklenose. Abby and her friends solve problems using rhyme, reason and cooperation.

“Until now, Sesame Street used exclusively hand-driven Muppets,” explained Carol-Lynn Parente, executive producer at Sesame Workshop. “We went the CG route with Abby’s Flying Fairy School so that we could bring to life all the wonderful physical action our writers envisaged, such as underwater scenes. As well, the CG format allowed us to produce many online game options for SesameStreet.org, extending the broadcast experience.”

SpeakeasyFX used Softimage to model, animate, render and composite the series. “We’ve been using Softimage since we opened our doors,” said Scott Stewart, executive director at SpeakeasyFX. “Our mandate was to bring movie-quality animation to Sesame Street.”

SpeakeasyFX created more than 500 new props and characters for the series. The team’s greatest challenge was the development of digital characters that behaved like real-world Muppets. This required advanced fur and cloth simulations, and complex rigging. Stewart said, “To preserve the creative vision, we decided to build our digital Muppet models as if a hand was manipulating them from inside. This was a breakthrough modification to our workflow and was critically important in helping us find the right balance between CG and traditional Muppet performances.”

SpeakeasyFX relied on Softimage’s Interactive Creative Environment (ICE) to quickly generate magic effects. ICE was used to simulate particles, bubbles, a genie in a bottle and even a macaroni twister. Stewart added, “ICE gave us the bandwidth to include a lot of effects and magic, allowing us to deliver a level of quality that exceeded initial expectations. After building our ICE trees and toolsets we were able to easily customise and add effects and magic to shots in an extremely labour-efficient way.”

“We feel fortunate to have collaborated with SpeakeasyFX on Abby’s Flying Fairy School,” added Sesame Workshop’s Parente. “They developed the digital characters with fantastic furry detail. Doing the series in CG, using Softimage software, provided the freedom to showcase different types of storytelling, while preserving what viewers of all ages love about Sesame Street.”

Stewart concluded, “Two of the big success factors for this project were great people and great technology. The Sesame Workshop staff clearly communicated their design ideas and vision with us. Miranda Barry and Carol-Lynn Parente were excellent at helping the project stay true to the Sesame heritage.”

Find out more about Sesame Workshop