Actress Tilda Swinton and director Mark Cousins are currently leading a team of film fans who are dragging a mobile cinema around the Scottish Highlands. 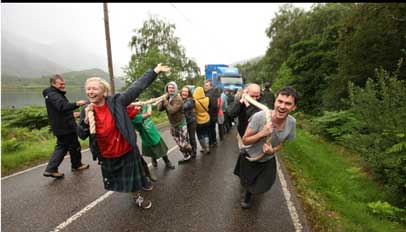 Tilda Swinton and Mark Cousins bring the cinema on A Pilgrimage. Photo by The Guardian

The Oscar-winning actress and the Northern Irish director, along with 40 assorted ‘fellow travellers’ are accompanying the 33.5-tonne movie truck through towns and villages for A Pilgrimage travelling film festival. 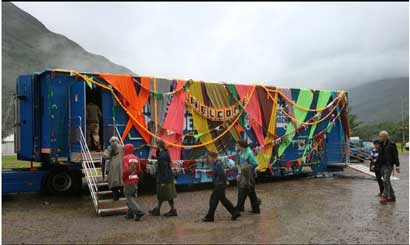 The Screen Machine mobile cinema. Photo by The Guardian

The route the Screen Machine will follow, from Glencoe to Swinton’s hometown of Nairn, will take in some beautiful scenery on it’s eight and half-day journey, but also some fairly steep hills. So the fact that the party is dragging the mobile cinema by rope at various stages on the journey has caught the headlines around the world. 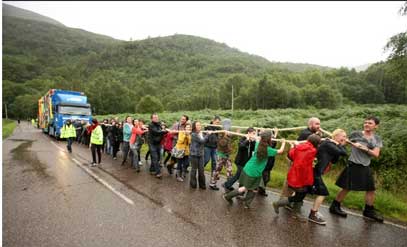 Fellow Travellers pull the bus on A Pilgrimage. Photo by The Guardian

Swinton said the foot slog – a tribute to movies and the Scottish landscape – was a ‘mad idea’ that seemed appropriate. She and Cousins, who previously had screened movies in the besieged Sarajevo during the Bosnian war, came up with the idea after they staged the Ballerina Ballroom film festival in an old bingo hall in Nairn last year.

Some of the films shown have links to the areas in which they are being shown. For example, the cinema will stop today at Culloden, site of the tragic end of the Jacobite rebellion, with the Peter Watkins film of the battle, Culloden, showing this afternoon. This is followed this evening by Throne of Blood, Akira Kurosawa’s homage to Macbeth, which will be shown in Cawdor. 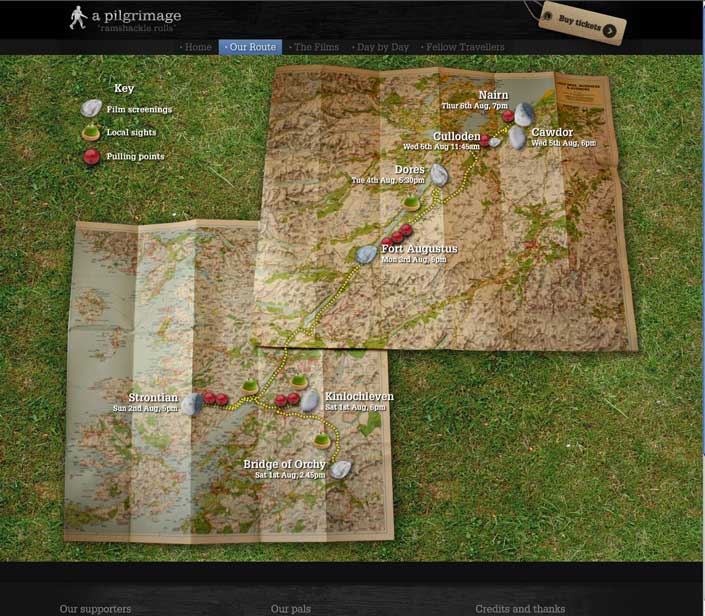 All of the fellow traveller places, at £70 a ticket giving access to all the films on the journey, have been filled. In an interview for The Guardian, Swinton said most of the screenings have also been heavily over-subscribed.

Many people living in remote areas were starved of good cinema, Swinton said, and were hungry for non-mainstream films. She added that satellite television and DVDs could not replace live cinema. “People want more difficult cinema than they’re being given and the experience of cinema, not just the film.” 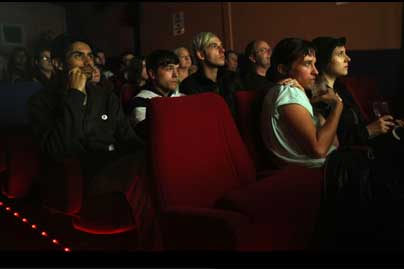 The interior of the Screen Machine offers a more traditional shared cinema experience. Photo by The Guardian

The Guardian is following the pilgrimage, with photo updates and reports.

The site for A Pilgrimage, designed by Coob, also lists more information and screenings 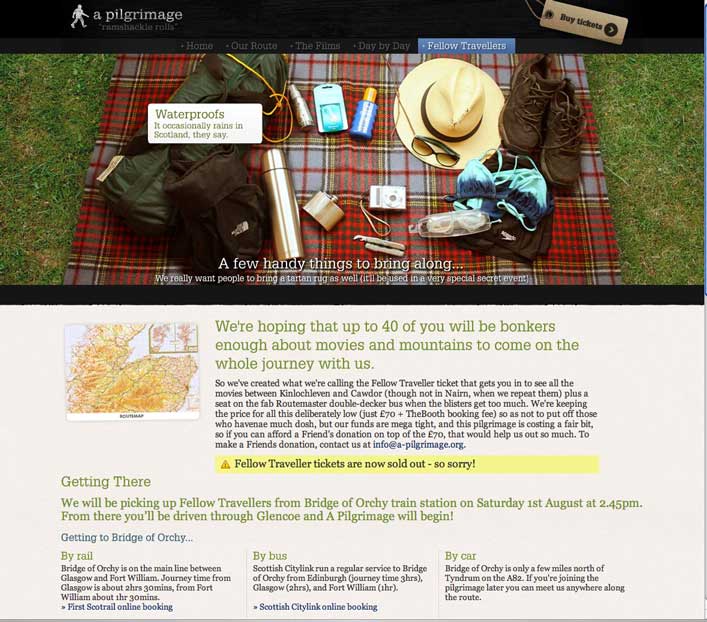 Fellow Travellers are advised to be prepared for the Scottish journey