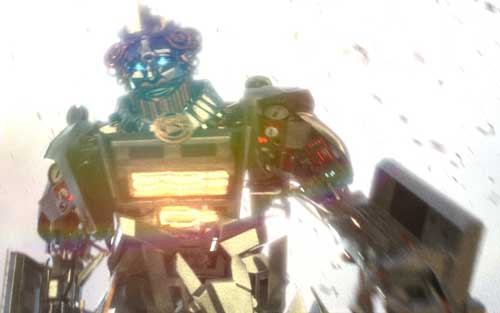 They feature a cast of robot characters from the highly anticipated summer blockbuster “Transformers: Revenge of the Fallen”. Airing as the feature hits US cinemas, they capture the same action-packed cinematic quality as the movie franchise, due in large part to the sharing of production talent, and, in the case of LG, digital assets across the feature film and commercial production pipelines.

“Deceptiphone”, for ad agency Young & Rubicam, plays on the LG Versa’s features by comparing it to the shapeshifting abilities of a Transformer. It features Transformer Optimus Prime menacing a man whose LG Versa is undergoing a series of transformations, showing off the features of the phone.

Digital Domain’s Features division worked on the first “Transformers” movie and its current sequel, so the artists had a pre-existing toolkit of digital assets that they were able to reuse. These were put to great effect to construct the phone as it transforms, imbuing it with the actual gears, electronic pistons, cylinders and other parts used to build a Transformer.

Digital Domain Visual Effects Supervisor Jay Barton provided on-set VFX supervision and oversaw a team of character animators to orchestrate the phone transformations and interactions with the various bits of technology and the lead actor.

This approach allowed the spot to stay within the fantasy realm of the movie and also maintain its high-end aesthetic. Further pushing the big-budget filmic feel, Bay’s production team also used the film assets for Optimus Prime and Decepticon (provided by ILM) and shot the spot on the same L.A. location as the film, with the same camera, lighting kit and lens package.

“Our relationship with Michael Bay extends beyond the ‘Transformers’ films, and these spots build on a collaboration that dates back more than a decade,” said Ed Ulbrich, President, Commercials and Executive VP of Production, Digital Domain. “Even before Michael became co-chairman of Digital Domain, we worked on a number of feature and commercial projects he directed and Michael has always pushed us to achieve the impossible.”