The spots “Money Mayhem” and “Truck Shaker” show a broiler in the Burger King kitchen that “transforms” into a giant robot version of the chain’s US trademark icon BK King, before exploding through the restaurant’s walls to present a formidable cash prize to lucky diners leaving the restaurant.

Digital Domain Visual Effects Supervisor Jonah Hall and his team did extensive look development for the Kingbot to ensure he was a recognisable hybrid of the King mascot and a Transformer. 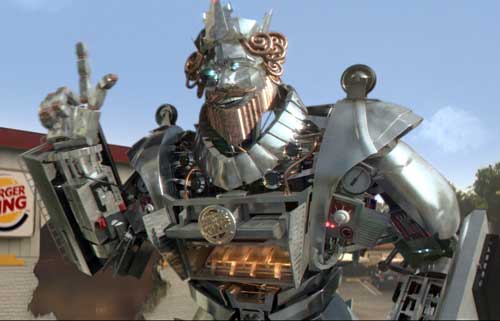 Digital Domain worked closely with the production designers, practical effects team and set builders – many of whom were ‘borrowed’ from the movie’s below-the-line team – to determine how large the Kingbot should be so everything would scale accordingly.

The set builders created a fake extension to the Burger King restaurant then Hall and his team did previz to determine how the robot should move within the commercial. Based on this rough schematic, Digital Domain drew out areas where the practical explosives would ultimately detonate.

“These Burger King promos were a lot of fun, in large part because we had dialogue and sync sound, and we got to work with actors,” said Jonah Hall, Visual Effects Supervisor at Digital Domain. “Rob Cohen and the production team at The Institute wanted these spots to be very cinematic, right down to the decision to shoot in wide-screen anamorphic and by paying special attention to framing, action and camera moves. He also had Amir Mokri, his DP from ‘The Fast and the Furious,’ shoot the campaign.”

In addition to the TV spots, Digital Domain is also providing an animated sequence featuring the Kingbot that can be viewed at www.bktransformers.com