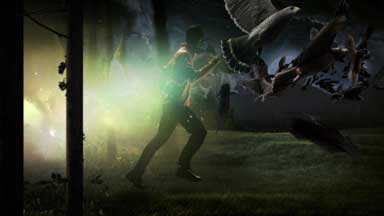 It’s Shilo’s latest inspirational side-project, under the creative direction of Andre Stringer. The track is taken from ‘The Wunder Tales’ album by BrotherSister, comprised of siblings Dante and Xavia Nou. 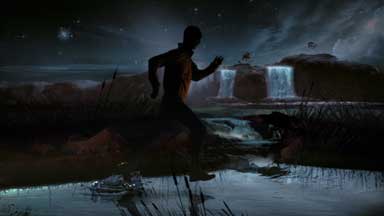 Slowly fading in from black, the video opens on a man in the centre of the screen, running in place in slow motion. We move to an open field in the shadow of a mountain range under a starry sky, but his nocturnal journey, is interrupted by magical swirling lights that begin to appear around him. After one of the sprites impacts the runner, a darker sequence begins where he runs through water, and then through a forest. He continues through a ruined town, finally emerging into a molten, apocalyptic, alien landscape. 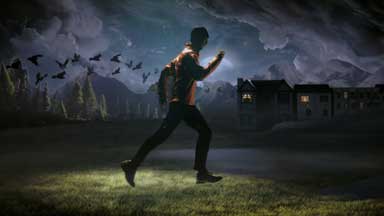 “After listening to the record, I just fell in love with the poetry of the song and lyrics,” explained Stringer. “For the video, I wanted to explore the idea of perseverance through change and adversity, and we found a way to take that idea to an epic scale by using one seamless shot where a person runs though time and space. We began by shooting a five-second test of the guy running in front of a green screen, and over the course of about a year, we turned that into a full music video. Almost everyone in the studio has touched it at some point, including Dante when he was here contributing sound design and music to some of our other projects.”

“We are really excited about this video,” said Dante Nou. “We’ve both always loved the style and feel Shilo go for, have been blown away by their creativity, and feel that the film ties in with the music perfectly. Shilo also helped out with the cover art for ‘The Wunder Tales,’ and so the style has bled through to this really well. We couldn’t be happier with how it has turned out.”

“As Shilo’s artists developed the video, they sent us bits and pieces along the way, which in turn spoke to the videos we were devising for projection at our live shows,” added Xavia. “Visuals have been critical… we are both artists as well as musicians, so to work with people at the top of their game has been an excellent experience.” 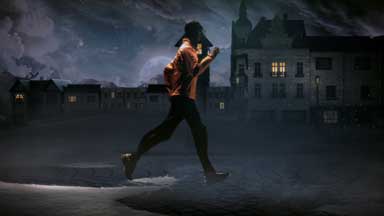 Like many of Shilo’s productions, ‘Still Run’ combines still photography and cinematography of custom-built miniatures, and computer animation created using Maya, with After Effects compositing and visual effects artistry. “We did not want the finished look to appear photo-real, but rather, as a highly stylized vision, like something that may appear in a dream,” said Shilo’s lead artist Chris Fung. “Working over a long period of time with many different types of elements, our main challenge was to seamlessly combine everything into one strong, visually compelling story.” 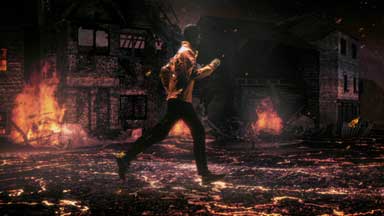 For additional sound design to complement the visual storytelling, Shilo turned to Gavin Little of Echolab.