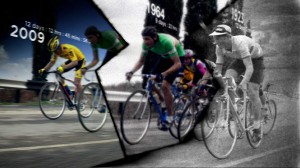 The 60-second and 30-second commercials, part of Lucozade Sport’s ‘Evolution’ campaign by M&C Saatchi London, use imagery of athletes from different eras competing against each other spanning the decades from 1920 to the present day.

Source material came from a number of different cameras, from slo-mo digital to 35mm and 16mm film to photo finish cameras. This meant a complex job for Rushes that required the use of multiple grades on the same shot, overseen by Adrian Seery, Director of Telecine. “The Da Vinci Resolve suite proved the ideal grading environment for the multi-layered colour correction required,” said Seery. “Working from scanned data allows for greater speed and accuracy compared to second passes in conventional telecine suites.” 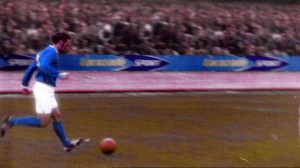 The fast turnaround on the shoot meant footage was shot both in the day and at night with the daylight material regraded to give day for night sequences where needed. All the stadium crowd scenes were tracked in from separate plate shots by the Rushes team led by Flame artist Rufus Blackwell.

The selected takes from each decade were graded in Resolve and then mattes created of all the different performances from each era.  Individual looks were then created to represent each era using a combination of layered film effects and shooting material back off the TV monitors and downgrading through different analogue tape formats.  These were then composited with integrated graphic dates together with graphic overlays. 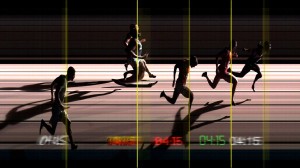 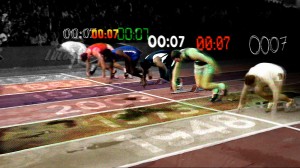 Flame artist Adam Watson focused on the running sequences with fellow Flame artist Leo Weston working on the pack animations which feature throughout the commercial. The look and graphic design for the commercials was the result of a collaborative process between Kaye, Rufus Blackwell, M&C Saatchi Creative Director Graham Fink and creatives Tristan Cornelius and Joe Miller, as well as Jeff Knowles at Research Studios.

“Making this Lucozade Sport commercial has been a long process: an evolution of techniques and ideas,” said Graham Fink. “Trying to find that which is new and fresh. Working with a team of obsessive individuals: director, editor, visual effects artists, sound designers, who jumped hurdle after hurdle in the pursuit for excellence. Good is the enemy of great. I got the result I wanted.”